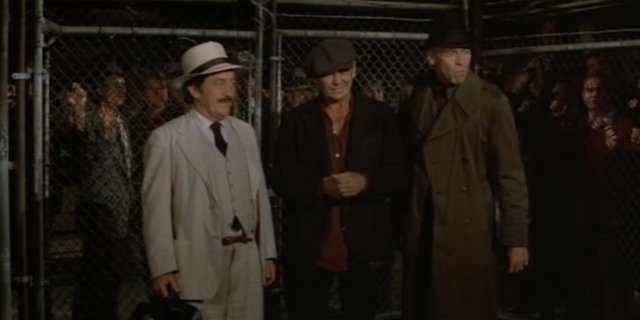 Hard Times is a film set in 1933, in the midst of the Depression, but despite the title, this isn’t a tale about crawling back from the brink of starvation, or of serving time in jail, though main character Chaney is implied to have done both of those things. Rather, it’s about the underground world of bare-knuckle street-fighting, and the characters that inhabit that world. The film stars Charles Bronson, just a year after 1974’s Death Wish, and a few years before he found himself permanently typecast as a vigilante as a result of Death Wish. Here Bronson plays Chaney, a drifter who hops out of a boxcar at the beginning of the film, witnesses a street-fight play out and more importantly pay out, and approaches one of the promoters for his own shot at the action. The promoter, Spencer “Speed” Weed (played masterfully by James Coburn), takes him on, and after witnessing him knock out an opponent with one punch, takes him down to New Orleans in the hopes that they can win some serious money down there. Strother Martin rounds out the main trio as Poe, a medical school drop-out who has an opium addiction and makes his living by patching up fighters.

The three of them then set about to make a living by getting Chaney into matches, and winning the bets on those matches. Speed arranges the matches with other promoters, Chaney is the “hitter”, and Poe patches him up — not that we ever really see that occur, as Chaney is so far out of the league of his opponents that he only sustains minor injuries. In fact, most of the fights leave a bit to be desired, being over quickly and being fought rather unconvincingly (it’s pretty easy to see the missed hits and pulled punches in the film). But fortunately, while the movie is centered around street-fighting, it’s not the fights themselves that drive the movie.

No, the central conflict of the movie is all about the money… and most precisely, Speed’s handling of it. Speed borrows a thousand dollars (in an age where an apartment rents for $1.50 a week) from the crime boss Le Beau for their stake in one of the fights. Although they win plenty of money in the fights, and Speed gives Chaney and Poe their proper shares, he neglects to repay Le Beau, and gambles his own share away. This, of course, doesn’t sit well with Le Beau (don’t shady business people get a little handbook saying “Don’t piss off crime bosses”? It seems like they should.) Speed gets abducted, and gets an offer of the “can’t refuse” sort from a rival promoter, “Chick” Gandil. Gandil, whose best fighter was beaten by Chaney earlier, has brought “Street”, the best fighter from Chicago, down to New Orleans. He wants Chaney to fight Street, with his share of the earlier winnings on the line. And win or lose, Gandil will pay off Speed’s debt for him… as long as the fight takes place. Otherwise, Speed’s on his own, and his life expectancy will be abruptly truncated.

I try not to over-analyze movies while I’m watching them, and generally don’t go in for seeking out deeper meanings. But to a certain extent this movie begs for some critical evaluation on its characters, because the characters’ personalities drive so much of the plot, and yet Chaney, the lead, is almost a cipher. When he leaves on a train at the end, the way he first entered the film, we know little more about him than we did at the beginning. He doesn’t talk much, and he doesn’t react to much. He rents a dilapidated apartment, and declines an offer of furniture, feeling a bed is all he needs. He starts dating a woman, Lucy (played by Bronson’s wife and frequent co-star Jill Ireland) whose husband is in jail, and he does it with such casualness you wonder if he ever takes her to anything but coffee. When she breaks up with him, he takes it in stride. The only time we see him really react to something, it’s to go after a promoter who cheated him and Speed out of their winnings, and even then his emotions are all kept very low-key. When Lucy asks him if he fights because of a feeling of superiority over his opponents, he denies it. “Hey, there’s no reason about it. Just money.” It’s all just business to him. In the archtypes of the Freudian Power Trio, he’s the Superego, all rationality and logic.

“It’s just business” is perhaps an odd mantra for the Superego, which is usually construed as the influence of culture and law, but “it’s just business” is in fact the culture and law of the street fighters as portrayed here. The fighters have a respect for each other in the ring, and only the one who is the most thuggish of the bunch is shown to hold a grudge over losing — and even he mostly holds it against the mouthy Speed, not Chaney. Street, presented with an opportunity to load his fists with some steel weights during his fight, knocks them away, preferring to win or lose on his own terms. Even Gandil laughingly joins in with one of Speed’s sayings towards the end; “The next best thing to playing and winning is playing and losing”.

In contrast to Chaney’s Superego, Speed plays the part of the Id. Open and charismatic, constantly yammering about something, always trying to make a deal. He’s selfish, greedy, and careless with his own money. He cheats on his fiancee at a brothel. He puts no thought into how he is going to pay back his debts. When they come due, he tries to borrow the money from Chaney, not politely, but by asserting that Chaney “owes him” for using Speed’s contacts to set up the fights. Chaney, of course, tells him he’s done and walks away. This leads to Speed’s abduction, and yet all the while, Speed never lets his captors see that he’s concerned. He taunts and mocks them all the while, bums a cigarette, and gets into a game of poker with them. Even with his fate being out of his own hands, he keeps treating life like a game.

If Chaney is the Superego and Speed the Id, this of course casts Poe as a rather peculiar Ego. While Poe is addicted to opium, he is aware of his faults in a way that Speed isn’t. Unlike Chaney and Speed, who are essentially using each other, Poe comes to view the two as friends. And it’s Poe who ultimately reconciles the two, bringing Chaney to the final fight to save Speed, and reminding them that yes, despite their differences, they are in this together.

Hard Times plays these characters off of each other as they make their winnings. It’s seldom explosive; the conflicts outside the matches are typically soft-spoken unless they solely involve Speed and other loudmouths. But if anything, it’s low-key nature makes it more interesting, not less; we expect a street fighter to be loud and flamboyant and a barely contained bundle of rage. We don’t expect him to just quietly abide by everything that happens.