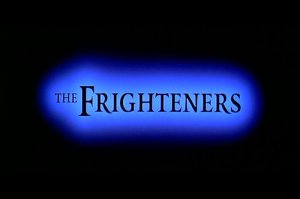 The Frighteners is a comedic horror film from 1996. Written and directed by Peter Jackson, the executive producer on the film was Robert Zemeckis, and stars one of Zemeckis’s best-known collaborators, Michael J. Fox. Fox plays Frank Bannister, a psychic-for-hire who crashes funerals, offers his business cards to the mourners, and hires himself out to people who have unexplained phenomena in their houses, which he attributes to paranormal activity. In general, he acts like a low-budget, less trustworthy Ghostbuster.

In The Frighteners, he’s both.

Five years ago, Frank and his wife were in a car crash. His wife did not survive, and Frank was left changed by the experience. He is now able to see the spirit world, and interact with ghosts. With the help of three of them, played by Chi McBride, Jim Fyfe, and comic legend John Astin, Frank sets up clients to be haunted, and then goes in and “exorcises” the ghosts.

Most ghosts are portrayed simply as they lived; for John Astin’s character, the Judge, the make-up artists got a little more elaborate.

Frank can be a bit of a jerk about this; our introduction to this con comes with him pulling it on a jerk he argued with after crashing through the guy’s fence. But strange things begin to happen soon after, things that Frank doesn’t have a hand in; while the jerk, Ray Linskey (Peter Dobson) is ushering Frank out the door, Frank sees a ghostly number carved on Ray’s forehead. A day or two later, Frank sees Ray’s wife, Lucy (played by Trini Alvarado, who looks uncannily like a younger Andie MacDowell here), in a funeral procession… for Ray, who suffered an apparent heart-attack at the age of 29 years old.

Ray’s ghost confronts Frank, trying to figure out what happened to him. Ray’s widow, on the other hand, just wants to know if Ray has any messages to pass along. Frank agrees to take Lucy to dinner. While at the restaurant, he sees another man with a number on his forehead, and then sees the man attacked by what appears to be the Grim Reaper himself in the men’s room. As the last man to see two different people alive before their unexplained deaths, Frank finds himself suddenly a suspect in a series of possible homicides. Sheriff Walt (Troy Evans) doesn’t really believe it of him, but the extremely disturbed FBI agent Milton Dammers (Jeffrey Combs) is certain that Frank is psychically stopping the hearts of the victims. Eventually, of course, it’s up to Frank to uncover the true killer and save the day.

This haircut is merely the first sign Agent Dammers has issues.

The Frighteners is a well-paced movie, settings things up quickly and moving at a brisk pace from then on. While it has comedic elements, these are mostly to give something to entertain the audience until the mystery/suspense starts in; as the situation becomes more serious, so does the movie. All of the actors turn in capable performances, with some doing particularly good jobs. Michael J. Fox, of course, is always good. Trini Alvarado is believable as someone who believes, but doesn’t understand, what she’s experiencing. The actors playing Frank’s ghostly friends are funny, especially (of course) John Astin, who certainly had experience on blending comedy and the macabre; and R. Lee Ermey is fun in a couple scenes where, although the name is changed, he’s pretty much playing the ghost of his character from Full Metal Jacket. The villain (whose actor I won’t reveal here for fear of spoiling things, though it’s not hard to guess) is likewise played skillfully; in fact, it might be said that playing a maniac is in the actor’s blood.

The special effects used look great, largely because they don’t go overboard with them. As stated above, most of the ghosts are simply pale, glowing versions of their living selves. Only scenes with the Reaper really go beyond that simple effect, and that also looks reasonably believable.

Reach out and touch someone?

The Frighteners may not frighten, but there should be enough spooky suspense here to satisfy the typical horror fan, and enough comedy to satisfy a fan of comedies. And it’s a well-written, well-acted movie with several entertaining characters. With Robert Zemeckis, Peter Jackson, and Michael J. Fox all involved in a movie, it’s hard to go wrong, and The Frighteners definitely did not go wrong.

5 Responses to The Frighteners