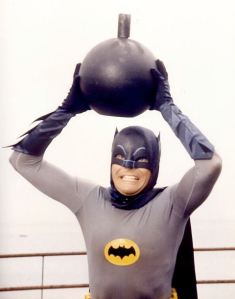 Opinions. Everyone’s got ’em. Sometimes a lot of people have the same one, and especially when it comes to pop culture, and especially on the internet, there is often a “group mind” effect. A collective opinion forms on certain works, and woe betide the odd person who goes against the grain. Well, I’m willing to go against the grain. Sometimes I think the collective opinion is wrong — not just something I disagree with, but fundamentally wrong in some respect — and I’m willing to play Devil’s Advocate and say so. And if you agree or disagree with me? Please, say so! This blog has an equal-opportunity comments section, the more commentators the merrier.

So let’s talk about comic books, and their screen adaptations. Specifically, let’s talk about Batman. Let’s talk about the 1960s comedic, camp, “Can’t get rid of a bomb” Adam West Batman. The TV series ran from 1966 to 1968, and the spin-off movie was released in 1966 between the first and second seasons. Now, West’s Batman might not seem controversial at first; certainly a lot of the mainstream loved him and still does. A lot of us grew up on him (in re-runs in my case), and the notion that somebody might hate the Adam West Batman may seem strange. But I was a comic book fan for a number of years (technically, I still am, I just can’t afford to be; being a dedicated comic book fan is seriously much more expensive than being a movie fan). And I’d join comic book communities on the internet, just as I do with movies now (though I never had a comic book blog of my own.) And time after time, far more than I ever saw any praise for the old Batman, I saw mockery, derision, disgust and outright hatred. “Batman should be serious”, “Batman should be dark”, “Adam West ruined Batman, and it took Frank Miller and Tim Burton to repair it.” For a certain apparently-large section of the Bat-fan demographic, expressing a liking for Adam West is like going to a Metallica fan-site and asking “So, how about that brilliant Justin Bieber?”

I’m not about to tell someone that they should like Adam West’s Batman. If they don’t like camp or a comedic Batman, that’s their opinion, and welcome to it. But I do think they should at least respect it.

Let’s tackle the issue of camp head-on. First, it should be remembered that camp is different from cheese. Cheese is an accidental by-product, it’s when you’re laughing at something that wasn’t meant to be funny. Camp is deliberate; it may look a lot like cheese, but if you’re laughing at something, you were probably intended to. “Campy”, in and of itself, should never be used as an insult any more than “comedy” should. But let’s say you don’t like camp, or at least you don’t like the idea of Batman being campy. That still shouldn’t lead you to be blaming Adam West’s series for Batman’s stretch of campy comic books. While it’s common for the internet to have a myopic memory, the series is being mis-blamed when it comes to camp. It didn’t make Batman campy, it reflected the camp that was already present in the comics. Below I’ve selected some comics from Batman’s self-titled series and his starring issues of Detective Comics. Some of these are from pretty early on in the runs; all of them predate the Adam West TV series. Click to enlarge; it’s worth it. 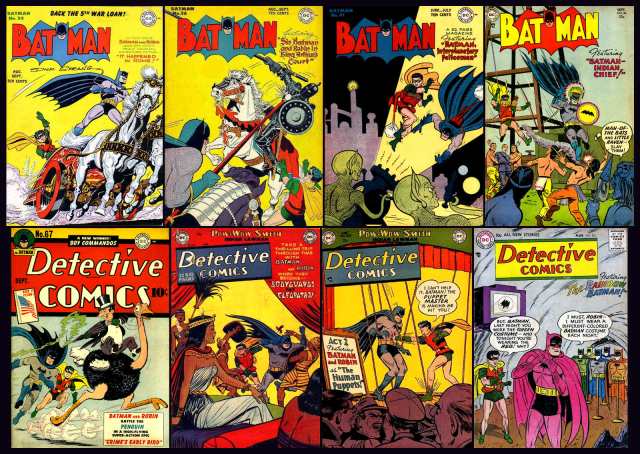 Finding these was not difficult. Choosing only eight was.

Nearly from the beginning of Batman’s tenure in the comics, there were stories featuring him that were, on any objective level, ridiculous. Batman fighting space aliens. Batman traveling through time. Villains with any number of hilariously bizarre gimmicks. The writers stopped taking Batman seriously from the moment he debuted, and why shouldn’t they? There is something just a little ridiculous about a man dressing up like a bat to frighten criminals, especially when you later partner this ordinary man up with the likes of Superman, Wonder Woman, Flash, and Green Lantern. Even the argument that he’s a genius detective is a little thin since at least two of the four I just mentioned are certified geniuses themselves. But, if you find yourself reading a comic and asking “Why does the Justice League need another detective when they’ve already got a forensic scientist with super speed?”, most fans will say you’re over-thinking it, taking it too seriously. And they’re right. Comics were never meant to be taken too seriously. A bit of silliness is inherent to the concept, because none of this could happen in real life. But even if you want to take Batman seriously, it should at least be clear now that it wasn’t the fault of the TV series that the comics didn’t take him seriously for a few decades.

But if the detractors shouldn’t blame Batman the series for the camp, that isn’t the same as respecting it, is it? So why should they respect it? Let’s start with the fact that the series actually was respectful to the comic books. Yes, it was campy, just as the comics were. But the producers of the series paid more attention to getting the look of the characters right than any live-action production of Batman to come after it. Adam West and Burt Ward look like Batman and Robin. Cesar Romero, even without shaving his mustache, looked exactly like the comic book Joker. Burgess Meredith looked like he walked right off the comics’ page as the Penguin… which can’t really be said of Danny DeVito.

Meredith’s performance as the Penguin, with adlibbed warks and waddles, was so popular that the writers made sure to always have a script handy for him to shoot whenever he came back to town, just so they’d never miss an opportunity to film a Penguin episode. And then there was Catwoman; there were three Catwomen on the show and movie — Julie Newman, Lee Meriwether and Eartha Kitt — and arguably each of them did a more convincing portrayal of the character than any to follow (though I have hopes for Anne Hathaway). This, despite the fact that Eartha Kitt wasn’t technically the same race as the comic book character. It didn’t factor in; she still played the part to the hilt, and that made it work. 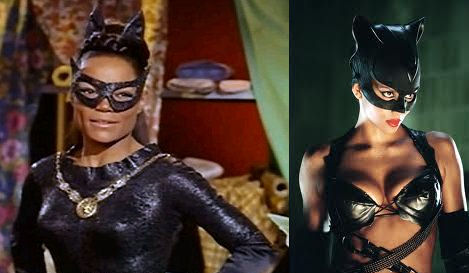 Of course, if you know your Batman villains, you’re thinking I’ve overlooked one of the big four. But when it comes to the Riddler, we have to move onward from “accurate portrayal” to another reason why the TV series deserves respect: impact. The Riddler was a minor character before the TV series. He had only three appearances in the comics before the television series debuted (four if you count one that was released almost simultaneously), and two of them had been 20 years prior. He was almost a forgotten character, but the producers of the TV series were interested in using a lot of minor villains to pad out spaces between the “big villains”. And then they recruited Frank Gorshin for the character, and he filled the role with so much personality and that maniacal giggle, and the Riddler went from a minor fill-in to one of the biggest Bat-villains around. 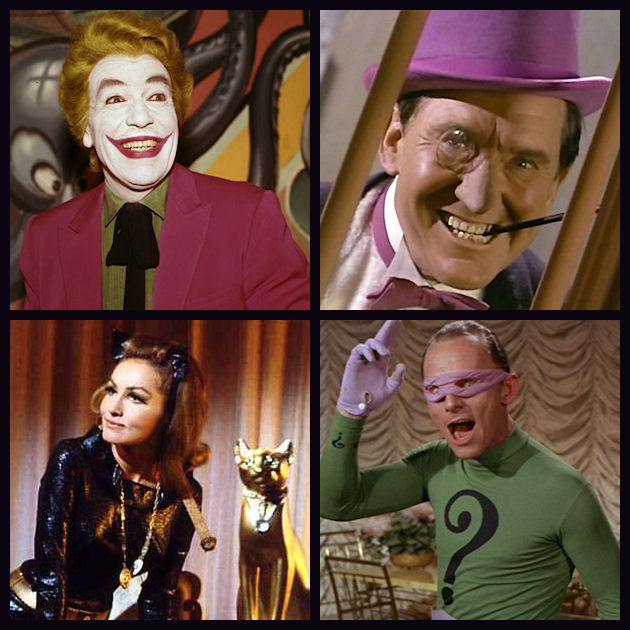 The Adam West series is the reason there are considered to be four major Batman villains.

Of course, I’ve also seen some fans acknowledging that, but then stating that they didn’t like the costume the Riddler wore in the TV series and those early comics. They prefer the costume he wore in the 1990s animated series, and the comics that followed that, with the spandex replaced by a question-mark-bedecked suit and tie and a bowler hat. Well, riddle me this, Riddler fans: Do you mean this costume? 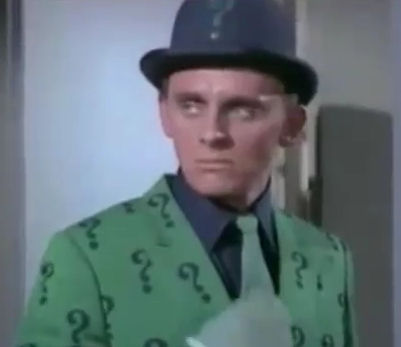 Sinister style. It’s what the fashionable villain is wearing this season.

As the story goes, Frank Gorshin requested a change to the Riddler’s costume after a few episodes. He found the spandex and mask uncomfortable, so he suggested a suit instead. The producers went along with it, and it worked so well that it would eventually be the inspiration for the Riddler’s redesign in the comic books (though those added the mask back.) Between raising the public awareness of the Riddler to top-villain levels and establishing what has become the definitive look for the character, Frank Gorshin arguably deserves partial creator credit on the character.

And the Riddler isn’t the only character who owes their prominence to the TV series. In fact, there’s a major character who wouldn’t even exist otherwise. Not just a minor character turned major, but a character whose addition to the comics was made at the behest of the TV writers. She debuted in the comics a bit before her TV screen debut, so it wouldn’t be completely out of left field to the viewers when the series turned the Dynamic Duo into a Terrific Trio. Yes, I’m talking about Batgirl. Barbara Gordon, niece of Commissioner James Gordon, would not exist if it hadn’t been for a desire to boost the ratings of the show by bringing in female viewers. There had been a Bat-Girl before (note the hyphen, incidentally), but she was the junior partner to Batwoman, and both were characters introduced solely to give the Dynamic Duo pseudo-love-interests. They were part of the 1950s campy era, and were basically domestic housewife personalities transposed into the wacky adventures Batman was getting into at the time. Barbara Gordon as Batgirl, however, was more of an equal, capable of fighting crime on her own as well as alongside the men. 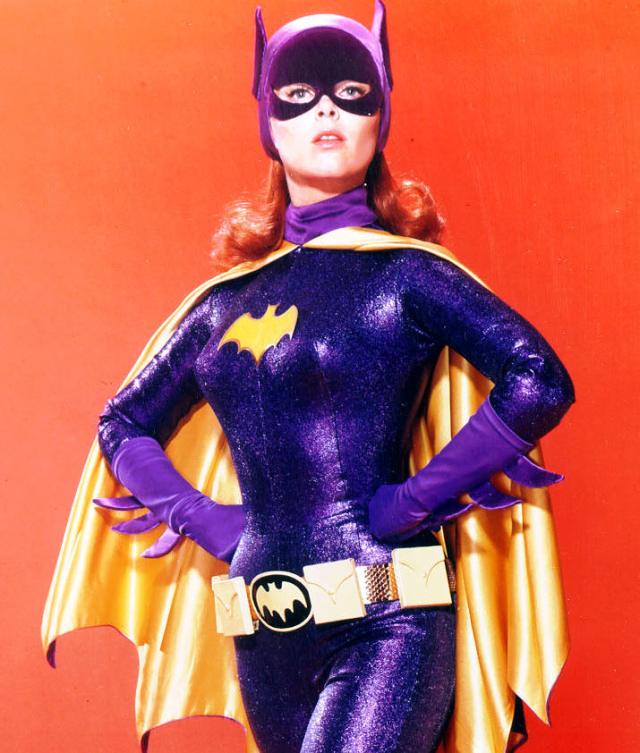 That’s right, the TV series actually made something about the comic books more serious.

It’s impossible to overstate the importance of this addition to the comic books. It added a distaff counterpart to Batman who wasn’t a bimbo (at least, depending on the writer). It added to the back story of Commissioner Gordon, helping to flesh him out as a character. And the presence of Barbara Gordon is vital to the story in The Killing Joke, often considered the defining take on the Joker. Without Batgirl, that story winds up being radically different. So do the next several decades of comics, with Batgirl progressing to Oracle and becoming the information broker to the superheroes (though I gather DC’s “new 52” initiative has reverted her to Batgirl again. That’s how it is in comics. Half of everything gets undone in 10 years, the other half in 20.)

But regardless of the occasional fickleness comic writers have for their own continuity, it can’t be denied that for several decades, the Adam West Batman TV series has had a profound positive impact on the comic books and all derivative media. Even those who don’t like the camp factor should respect it for that.