Tonight — well, last night at this point — I went out to see The Muppets. I had high hopes, thanks to rave reviews everywhere. It’s inevitable that this film will draw comparisons to 1979’s The Muppet Movie, the first film of the franchise. After all, not only was that the big film of the series, but the two films have more in common with each other than the other films. In some ways, nearly every Muppet movie since the first has been about the Muppets in different roles; as investigative reporters, as Broadway hopefuls, as characters from literature. Muppets From Space is the biggest exception, and even it was about the Muppets in a situation outside the show. Only the first and most recent films are really about the Muppets as an act: The Muppet Movie showed how they came together in the beginning; The Muppets shows how they come back today.

In the interest of being a proper critic, and not just a Muppet fanboy, I have to say that The Muppets does not come close to being as good as The Muppet Movie. I also have to say that this doesn’t matter. A film can fall pretty far from that height and still land very high, and The Muppets is a great movie. If you have ever loved the Muppets, you will love The Muppets.

Why don’t I get things started?

The movie starts off by introducing us to Walter and Gary, two brothers still living together after they’ve grown up. Or mostly up. Gary (Jason Segel) is an adult man, but Walter is a puppet, permanently stunted in growth and giving rise to some puzzling questions about genetics. Walter hasn’t had an easy time adapting to life, and his only solace as he grew up was in the Muppet Show, which he has clung to even as the world has gradually moved on. Gary is dating local school teacher supreme Mary (Amy Adams), and though she has some resentment about the way Walter’s clinginess has resulted in their relationship being built around a trio rather than a couple — and that her and Gary have been dating for 10 years without any advancement in their relationship — for the most part the brothers are happy, sufficiently happy to have a song and dance number in the opening of the film.

Plus, the resemblance is uncanny.

When Gary and Mary go to Los Angeles to celebrate their 10 year anniversary, Gary invites Walter along so he can tour the legendary Muppet Theater. Walter sneaks away from the tour group to explore on his own, and in Kermit’s old office he witnesses a deal being worked out between Statler and Waldorf, and oilman Tex Richman (Chris Cooper). Richman is buying the theater, ostensibly to turn it into a Muppet Museum… but when the old hecklers leave the room, he reveals to his henchmen (Uncle Deadly, creepy as ever, and Bobo, guileless but somehow always on the wrong side) that the theater sits atop an oil reserve. He plans to demolish the Muppet Theater in order to get at it. Walter is horrified, and with the help of Gary and Mary, he seeks out Kermit to put a stop to it. The contract has an escape clause built into it; if the Muppets can raise 10 million dollars, the theater is theirs again. There’s only one solution. Get the gang back together. Put on a show.

Veronica (Rashida Jones), a TV station manager, gives them a time slot for the Muppet Telethon, albeit reluctantly. She’s concerned that the Muppets are has-beens, that nobody remembers them any more. The movie is unabashed about poking some fun at reality, and acknowledging it with a wink and a nod. It’s been 12 years since the last theatrical Muppet feature, Muppets From Space, and longer than that since they’ve had a TV show (Muppets Tonight!) and neither were great successes. Entertainment today is based on constructed reality, or edgy cynicism. To fit in, the Muppets would have to change. And this is acknowledged. And openly defied. 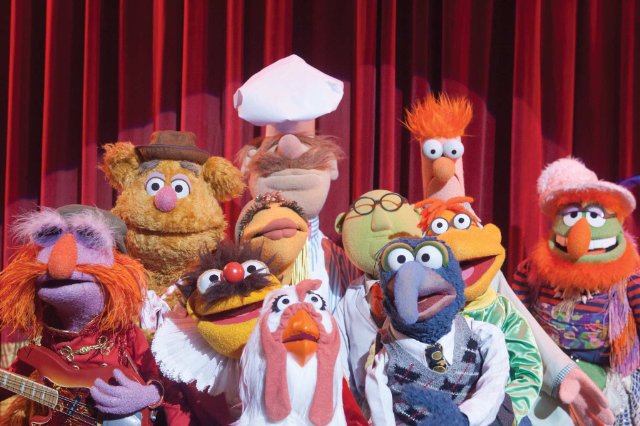 Look at us, here we are, back where we belong.

The producers have given me a small problem with nomenclature here, at least if I’m speaking aloud (thank you, written language and your clarifying font changes). It would be easy for me to say The Muppet Movie, and have someone think I mean this film, or for me to say The Muppets, and have someone think I mean the show or the characters. The easiest way to resolve this would be to say 2011’s Muppets, but even that isn’t quite right. “2011’s Muppets” sounds like the Muppets are getting an overhaul, perhaps an update with edgier humor, personality changes, and so forth. These are not 2011’s Muppets. These are 1976’s Muppets, in 2011. The characters are as they ever were. Kermit leads while barely holding on to his patience. Miss Piggy is still a temperamental diva. Fozzie is still comically unfunny. Gonzo still has a few dozen screws loose. Crazy Harry is still Harry. My only complaint on the characterization is that because the show makes sure to work everybody in, most characters only get one scene to steal. And as complaints go, that’s not much of one.

I’m sure, if I thought about it, I could point out different weaknesses of the film, places where it doesn’t quite hold up. But I don’t want to. The movie is simply too joyous and irrepressible to nitpick at it. There’s comedy, there’s heartwarming moments, there’s music almost constantly; appropriate use of existing rock/pop songs, inappropriate use of rock/pop songs (what ability I had to take Nirvana seriously is shattered), and several catchy original song and dance numbers. And, as if to forestall any comments that the songs don’t live up to “The Rainbow Connection”, they throw that in there, too. The movie is full of references to the earlier movies and to the Muppet Show itself. In many ways, it’s a celebration of nostalgia.

As if any less would be expected from a film that gives significant roles to characters as minor as Uncle Deadly.

As with the classic Muppet films, there are a lot of cameos, too many to count, from stars both old and new. Whoopi Goldberg, Neil Patrick Harris, Selena Gomez, Zach Galifianakis, and many more have bit parts. Jack Black steals a few scenes and has several others forced upon him, to great comedic effect. Everybody seemed to be having a lot of fun with this movie. And that’s what this movie is, just plain, pure fun. A singing, laughing, exploding antidote to all the crude and cynical humor out there. It’s not The Muppet Movie. But it’s still a great Muppet movie.

15 Responses to The Muppets