Any film buff — and just about everyone else — knows the name of Alfred Hitchcock, and can name several of his classic films. Vertigo, Psycho, The Birds and more have earned respected places as part of pop culture history. 1936’s Sabotage — originally released in the U.S. as The Woman Alone — is more obscure, and possibly overlooked.

Of course, when a man directs over 60 films, there are bound to be a few that fall by the wayside, and some of them may even deserve to. But even if I went into it knowing nothing beyond “this is a Hitchcock film”, that’s enough to make me a little curious about it, so I decided to check it out.

Refunds will not be issued for having higher expectations.

Sabotage opens up with a blackout in London, caused by squirrels human interference. As the workmen at the power plant speculate as to the motive of the crime, we are taken to a small theatre being run by Sylvia Verloc (Sylvia Sydney), who is being asked to refund her patrons’ money for the film they didn’t get to see. Her neighbor Ted (John Loder) tries to talk the crowd out of it, mostly by insulting them and quoting obscure by-laws, but Sylvia goes to talk to her husband Karl (Oskar Homolka) who tells her to refund the money. He says he expects to be coming into some funds soon, so they can afford it. Unbeknownst to her, but shown to the audience, is that Karl hasn’t been home long; he’s our saboteur.

The blackout causes only minor inconvenience and some laughter for the Londoners, and as Karl discovers when he meets with his paymaster (Austin Trevor), that isn’t enough for his co-conspirators. Though Karl is reluctant to do any actual harm to people, he’s instructed to set up a bombing. In the film’s great weakness, we never learn why any of this is being done. There’s an implication that they’re doing this to distract Britain from plans in another country, but what those plans are, or what the country is, is never specified or even hinted at. There’s a vague Germanic feel to the conspirators, and given the time this may be an intentional nod at the rise of Nazi Germany, but this is strictly after-the-fact speculation. All the film gives us is villainy without a cause.

Do any of you fellows remember why we’re supposed to be doing this?

Meanwhile, Ted — an agent of Scotland Yard, who has been on Karl from the start (none of this constitutes a spoiler, as the film lays it all on the table early) — is trying to get information on what’s going on by befriending Sylvia and her kid brother Stevie (Desmond Tester). Naturally, he doesn’t — this film is not full of competent characters — and his romantic overtures to the young married woman don’t exactly get him very far either. 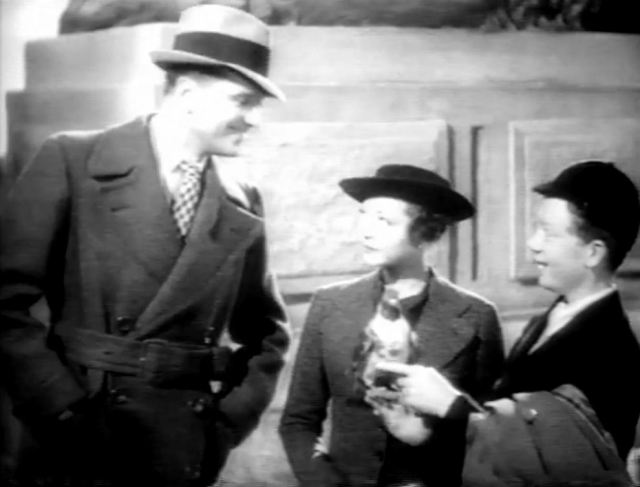 Since this is a Hitchcock film, I had my expectations reasonably high for it. But while the directing is, as always, masterful, the plot leaves much to be desired. Hitchcock is rightly reputed as the master of suspense, and this is a suspense film… but it’s not suspenseful. As soon as the bomb was sent on its way, I knew exactly what was going to unfold there. Any tension was defused by the combination of knowing what was coming, and a small degree of rooting for it because of the unintended victim being rather on the irritating side. The film isn’t helped by the flat characterizations… while nobody does an awful job of acting, there isn’t much space for any of them to do great jobs either (and Hitchcock wasn’t known for letting actors improvise). The stand-outs here are William Dewhurst as the bomb-maker, who is charming in an addled, sinister way, and Homolka as Mr. Verloc, who seems genial and mild enough until the third act reveals just how callous he really is.

3 Responses to Sabotage (The Woman Alone)