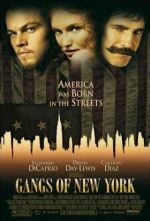 How does a film garner ten different Academy Award nominations and then walk away with a goose-egg? Looking at the 2003 Oscar results, it appears that Chicago razzle-dazzled Gangs of New York out of several of the awards it was up for. Not having yet seen that other 2002 film, I’m not really in a place to claim Martin Scorsese’s work got robbed, but after watching Gangs of New York, it’s hard to believe it didn’t earn at least one one of those little statuettes.

Perhaps, in keeping with the ethos of his film, Scorsese should have called out Rob Marshall and his crew for a battle royale on the red carpet. It certainly would have made for a more interesting awards ceremony.

And when these guys say red, they aren’t talking velvet.

Gangs of New York is primarily set in 1863, with an establishing scene set sixteen years earlier. Bill “The Butcher” Cutting (Daniel Day-Lewis) led his group of “Natives” — natural born U.S. citizens — against the Irish immigrant gangs in the “5 Points” area of New York, led by “Priest” Vallon (Liam Neeson) and his “Dead Rabbits”. Bill the Butcher kills Priest in the battle, and declares the Dead Rabbit gang “outlawed” — not to be mentioned in the 5 Points again. Priest’s young son Amsterdam witnesses the battle and the death of his father; he tries to run away afterward, but is caught and taken to an orphanage where he spends the next 16 years.

In 1863, Amsterdam (Leonardo DiCaprio) returns, with vengeance on his mind. He finds the Five Points changed in some ways, the same in others. Bill Cutting still controls the Points, and has such a hold that Boss Tweed (Jim Broadbent) allies with him to bring in votes. Everyone pays him tribute, even members of the Irish gangs, even former Dead Rabbits. Happy Jack Mulraney (John C. Reilly), one of the Rabbits, is now a police officer assigned to the area, on the take and subservient to the Butcher. It having been sixteen years, few people recognize or even remember Amsterdam, aside from Monk McGinn (Brendan Gleeson) and Amsterdam’s childhood friend Johnny (Henry Thomas). Johnny helps Amsterdam infiltrate Bill’s inner circle, so that Amsterdam can eventually kill Cutting publicly, but the relationship between Johnny and Amsterdam is strained by the affections of a female pickpocket named Jenny (Cameron Diaz).

The movie is nearly three hours in length, but never feels like it’s been padded, and never drags. Part of this is due to the plotting; while a lot of it is setup for the final act, most of the scenes are interesting in their own right, if only for showing the relationships between the characters. DiCaprio plays Amsterdam in a very understated manner; while this is an angry young man, he’s been keeping it inside for so long that it’s very low-key, and hard to pin down as having a specific direction in mind. Most of the other roles are colorful and entertaining, with standouts being Jim Broadbent performing Boss Tweed as the half-charlatan he seems to have been in history, Brendan Gleeson playing the amiable but stoic Monk McGinn, and John C. Reilly (before he decided to be a poor man’s Will Ferrell) as the bumbling corrupt cop. Cameron Diaz may be the weak point in the film, as her character only really seems interesting when she’s arguing with Amsterdam; how much of this is to be blamed on the actress is unclear. And Daniel Day-Lewis steals the show as Bill the Butcher, always energetic, and managing to be both menacing and charming at the same time.

Scorsese’s directing is, as expected, top-notch. The scenery for the borough was apparently created full scale for the film, adding a great deal to the realism of the film. Fight scenes are hectic and frantic, more realistic than stylistic. And the story, set with a background of the Civil War and the Draft Riots, sometimes gets overwhelmed by those “background” events, reminding that although Amsterdam and Bill are our central figures, their story of revenge is of small consequence compared to events that are literally tearing apart the entire city, from the homes of the upper class to P.T. Barnum’s Museum. Racism, ethnic discrimination, immigrant discrimination, class discrimination, and political corruption all play their parts in the events of the movie, making Amsterdam’s quest for vengeance anything but simple and straightforward.

Pardon me, but did our gang war just get interrupted by an elephant?

One note of movie trivia that’s kind of interesting here, in the “what might have been” category. If IMDb’s trivia section is to be believed, Scorsese had Gangs of New York in the planning stages since 1978, with it being shelved multiple times for various reasons. His original choices for Bill the Butcher and Amsterdam were supposedly John Belushi and Dan Aykroyd. While I can actually see each of them doing well in the roles, I don’t think this would have flown with the public at the time; both were renowned comedic actors, and neither had significant success in dramas yet. The audience would likely have gone in expecting a comedy, and treated it as such regardless of what they actually got. Considering the production values of the film, the actors he was eventually able to get, and the public’s perceptions of those actors, it’s probably a good thing for the film it did get delayed.

With great directing, realistic set design, an interesting plot and good — sometimes great — acting, Gangs of New York is a film that holds the audience’s interest for all of its 2 hours and 45 minutes. It requires a significant time commitment, but it’s well worth it.

5 Responses to Gangs of New York