In 1992, Robert Rodriguez made his first feature film on a microscopic budget, El Mariachi. Three years later, Columbia Pictures gave him a still modest but considerably larger budget to continue the story of El Mariachi in Desperado. The differences in going from a budget of seven thousand to seven million are pretty obvious. He was able to hire some name actors for the roles, including recasting the lead role with Antonio Banderas, the special effects (even down to the fake blood) are better, and there’s an increase in the quality of the cinematography that probably isn’t solely due to Rodriguez’s increased directorial experience. It’s amazing what a difference having an actual cameraman can make, not to mention a lighting crew. El Mariachi was a good film for what it was, but Desperado‘s higher budget leads to a more polished film.

Plus, having studio backing this time out meant that Rodriguez didn’t have to fund the sequel through being a human guinea pig for experimental medicines. This may be the reason the dream sequence in Desperado isn’t as trippy as the one in El Mariachi. 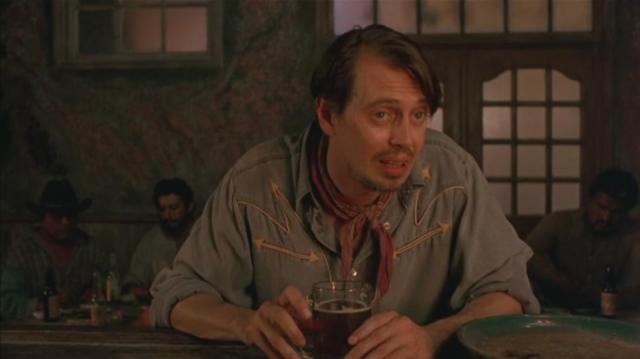 It’s been a few years since the events of El Mariachi, but the Mariachi is still out wandering Mexico, seeking revenge for the death of his girlfriend. Having killed the man directly responsible, he now seeks to wipe out his superior in the drug cartel, a man known as Bucho (Joaquim de Almeida). Tracking down Bucho isn’t easy, so the Mariachi has been hitting dive bars trying to find him, priming the bars by first having them regaled with tales of his own bloodthirstiness by his friend, Steve Buscemi (the character is never named in film, and is credited only as Buscemi). At one particular bar, the bartender (Cheech Marin), reacts tellingly to the announcement that El Mariachi is coming for Bucho, so they quickly learn that’s the right town to hit.

Not letting would-be assassins know you’re around is an underrated quality in bartenders.

Naturally, things go awry, and things get bloody. El Mariachi winds up mixed up with a librarian played by Salma Hayek, and in a rarity for this film, she actually has a name. Carolina helps keep him stitched up after his various scrapes, and the two begin a romantic relationship. Hayek and Banderas have good on-screen chemistry, and both are good enough actors to make their characters seem real despite the small amount of time devoted to characterization in the film. The film is full of small character moments, but it’s mostly about shootouts and fights and the occasional explosion. When El Mariachi isn’t fighting with Bucho’s men, Bucho’s men are fighting each other. Bucho is the classic “bad boss” type of villain, constantly threatening and badgering his right hand man (Carlos Gómez), and it’s an interesting dichotomy. Both de Almeida and Gómez play their characters with confidence and intelligence, but there’s a difference in tone; Bucho is impatient and rash, and his unnamed right hand seems almost browbeaten and weary. Bucho’s own bosses don’t seem to be much better, as they send an assassin of their own (Danny Trejo, being his usual quietly intimidating self) to take care of the problem, without bothering to inform Bucho ahead of time.

The action scenes are well choreographed and exciting, and gloriously over-the-top. Things get particularly ridiculous once El Mariachi calls in his friends Campa and Quino (Carlos Gallardo and Albert Michel Jr. respectively) for backup. Campa and Quino are militant musicians as well, and when the full trio are assembled, there’s a lot of firepower packed into some very unlikely guitar cases. (Amusingly, Gallardo played El Mariachi in the original film, so he’s actually back-to-back with his own replacement for one fight scene.) 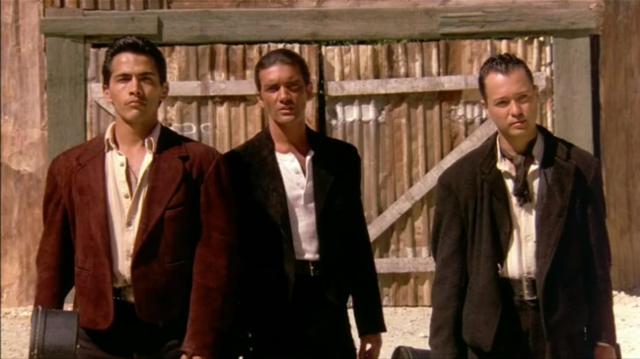 Though it has a much larger budget than its predecessor, Desperado still has a low-budget ethos in its story-telling. It’s not here to weave a complex, twisting tale or delve deeply into human nature via its characters. It doesn’t even give most of its characters actual names. It’s just here to shoot a lot of people and things in the most spectacular fashion it can. And in so doing, it provides an entertaining, if not particularly deep, action movie experience. I would rank it slightly above El Mariachi thanks to the improvements made possible by the higher budget, and I look forward to catching Once Upon a Time in Mexico some day to finish the trilogy.