Any movie studio makes some bad films, but most don’t set out with that as their intention. And then there’s Troma, and directors Michael Herz and Lloyd Kaufman. This studio is well-known for producing cult classics of the “not quite B movie” quality, and seems to revel in it. Having heard of them for some time, and even having seen a few episodes of the Toxic Crusaders cartoon as a kid (yes, there was a cartoon spin-off), I felt that in the interest of being fully informed, I had to check out their magnum opus, the film that cemented their reputation, 1984’s The Toxic Avenger.

And you know… all things considered, it’s really not that bad. 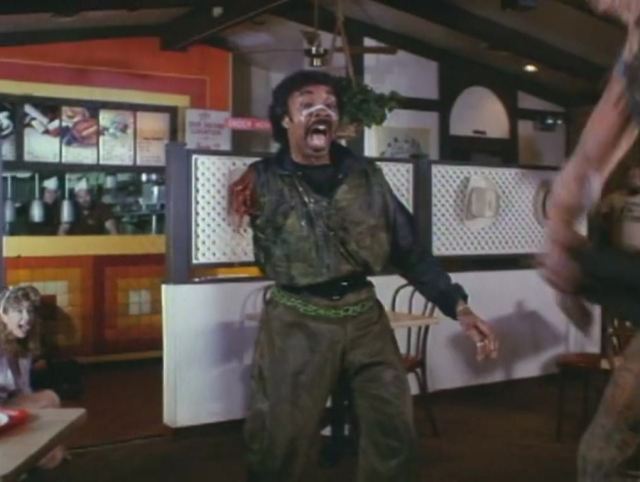 The enjoyability of the film is somewhat disarming.
(In keeping with the aesthetics of the film, all jokes in this review shall be terrible.)

The Toxic Avenger is set in Tromaville (branding really meaning something to the studio), a New Jersey town that receives all the toxic waste produced by New York City. It’s the story of Melvin Furd (apparently changed to Melvin Junko in later films), a janitor at the local health club. Melvin, played by Mark Torgl, is scrawny, socially awkward, inept at his job, and more than a little stupid. He easily draws the ire of the club’s jocks, especially the psychotic “Bozo” and “Slug” (Gary Schneider and Robert Prichard). Of course, these guys are more than just the typical jerk jocks; they and their girlfriends (Cindy Manion and Jennifer Prichard) are hit-and-run serial killers, running over pedestrians and bicyclists all over Tromaville. The gang decides to prank Melvin, and when he flees upon his humiliation, he winds up crashing through a window and falling into a vat of toxic waste being delivered by a couple of coke-snorting truck drivers. The waste starts reacting to his skin, and onlookers are horrified as Melvin is consumed by its effects.

The film starts off with a slow burn, but really starts to catch fire here.

After his ordeal, Melvin finds that is transformed. And deformed. But he’s also taller, stronger. He even seems to be sharper intellectually. Although he’s never called such in the movie, he is now the Toxic Avenger (played under make-up by Mitch Cohen and voiced by Kenneth Kessler). He has also gained an unerring sense of evil and a compulsion to thwart it — usually with extreme and graphic violence. This pits Tromaville’s corrupt mayor (Pat Ryan) and Nazi police chief (David N. Weiss) against him, but endears him to the public. The film actually does touch upon what happens when the hero kills someone who isn’t publicly known to be evil (in this case, a little old lady who was the head of a white slavery ring), which in a strange twist for a movie that’s silly and proud of it, actually means they thought of an issue that often gets overlooked in serious action movies. But it doesn’t last, and his heroics win the day, the town’s friendship, and the love of a blind klutz named Sara (Andree Maranda).

The film is not, by any means, well-directed. Kessler’s voice seldom seems to be in sync with Cohen’s body. Most of the actors are mediocre or terrible. And the fight scenes are full of obvious fake hits that miss by a mile but are reacted to as if they hit with full force. But what the film lacks in quality it makes up for in enthusiasm and audacity. It’s well aware it’s a B-movie at best, and is completely unashamed of it. Everything is over-the-top. Villains are comically evil, dumping toxic waste for the fun of it or being willing to run over kids on bikes — which is actually shown, in contrast to a lot of films that would tease it but wouldn’t dare to actually do it. For their sins, they’re executed in bloody but inventive ways. It’d be easy to classify the appeal of the film as just a gore-fest, but it’s really not; those scenes are occasional, and for the most part the film is simply a cheerful superhero spoof. It’s not a smart film, or really even a good film, but it’s aware of what it is, and succeeds on its own standards. I won’t say that I would seek out the sequels, but honestly? If there wasn’t anything better to watch, I’d consider checking them out as a way to kill some time.

1 Response to The Toxic Avenger