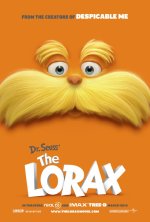 Hollywood has made more than one attempt in recent years to bring the worlds of Dr. Seuss to the big screen. And after a few false starts involving comedic actors in furry suits, they seem to have caught on to the notion that the way to capture the Seussian look and feel is to go with animation. The latest offering from Hollywood, opening yesterday, is The Lorax; directed by Chris Renaud and Kyle Balda, both of whom worked on Despicable Me, the movie was created in 3D in both senses of the word: it is computer-rendered animation, and it is shown in stereoscopic 3D using either Real3D or IMAX 3D depending on which cinema you go to.

It’s easy to have some concerns about how the film would turn out; not only is The Lorax one of Dr. Seuss’s most overtly preachy books, but there’s always the question of whether the Dr. Seuss “look” will translate well to 3D. In this case, however, the film turned out just fine.

Don’t bet against an epic mustache.

The trailers spent most of their time showing the framing story, which may have given some people the impression that the movie was deviating significantly from the book. It’s not; the original story is still very much intact and faithfully adapted in the extended flashback that forms most of the movie. But since the framing device is where the movie starts, I’ll start this review there for now. It’s all set in the isolated and seemingly utopian city of Thneedville, where a boy named Ted (voiced by Zac Efron) would like nothing more than to impress the girl down the street, Audrey (Taylor Swift) — and she’d like nothing more than to see a real, live tree. See, in Thneedville, everything is plastic, and the town is run by the corporate empire of O’Hare Air — which sells bottled air to combat the smog in the town. (Subtle, this movie ain’t.) Mr. O’Hare (Rob Riggle) is a villain in the Captain Planet mold — greedy and polluting purely for the sake of being that way. While it feels a little disingenuous to complain about a cartoon villain being two-dimensional, he’s so over the top it’s just a little hard to take at face value even within the confines of a children’s movie.

He’s round, but not well-rounded.

In truth, the characters in the framing story are all pretty simplistic, as is the plot. But that’s OK; it is, after all, just the framing story. Ted’s quest for a tree for Audrey is pooh-poohed by his mother (Jenny Slate) — after all, they have an Oakamatic 5000, what do they need a real tree for? — but his Grammy (Betty White), who isn’t as senile as she lets on, tells him where he needs to go to find out about trees. (Incidentally, Ted is one of those many cartoon and film heroes who seems to have a completely-unaccounted-for parent. Presumably he had a father at one point, but it’s never touched on. Of course, he’s still one-up on Audrey, who seems to have no parents at all.)

The framing device of Ted’s quest for a tree serves a few purposes. First, it sets things up a little darker (hard as that may seem) than the original story, while at the same time allowing it to finish on a happier note. And it gives the Once-ler someone to tell his story to; instead of addressing the audience directly, or being shown as a current event, the story of the Once-ler and the Lorax is told in flash-back to Ted as he seeks out what happened to all the truffula trees. This story, the part that was actually in the book, forms the bulk of the movie, with just occasional interjections of the framing device. It all works out pretty well, as natural breaks in the story are used to transition from one to the other. 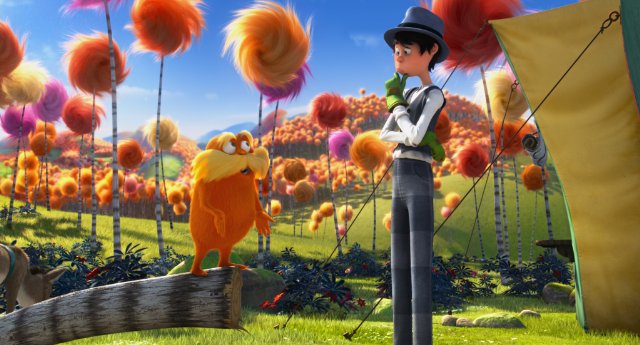 Telling a tale of technicolor trees…

It’s impossible to discuss The Lorax — the book or the movie — without discussing its message. Is it strongly in favor of environmental protections? Is it heavy-handed? Is it “trying to indoctrinate our children” as some pundits have said? Yes. It’s The Lorax. This is something you should know going in, and either you’re willing to accept that or not. It’s not subtle — in fact, sometimes it’s ridiculously unsubtle — and it’s unashamed about having an agenda, and that agenda very much is the plot of the film. The movie actually does a better job than most of giving proper (and somewhat sympathetic) motivations to the person who is doing the wrong (well, in the case of the Once-ler, if not O’Hare), and even gives a small nod to the notion of sustainable harvesting. But most of that will fly right over the heads of children, who will simply be left with a message of “cutting down trees is bad”. But even with that, most of the kids will promptly forget and just view it as a fun movie. There are also a few subtle digs in there for the adults, as the movie includes little gags at the expense of beer commercials, the bank bailout, and even its own cross-promotional advertising (at least, I don’t think I’m the only one who saw the “Lorax-approved Thneed” and immediately thought of the Lorax-themed electric car commercials.) Long story short, yes, there’s an environmental message driving this movie, but even though most films that let a message (any message) dominate the film wind up being bad films, The Lorax is still very enjoyable.

A large part of this is because the film never takes a break from putting something interesting on the screen. There are fun action sequences, and there’s light humor throughout. I was watching with a mostly full crowd last night (unusual for me), and kids and adults were both laughing gently throughout. It wasn’t usually big belly laughs, but it was a constant state of amusement, and that’s all one can really ask for. There are also a few songs interspersed throughout the film; while we’re probably not looking at Oscar material there, they’re all listenable and fun.

There’s always some risk when casting celebrities as voice actors; sometimes it’s hard to separate the voice from the person and their other characters. For example, one of my few small issues with Disney’s Tangled was that although I thought Zachary Levi did a great job as Flynn Rider, I couldn’t help but picture his character Chuck Bartowski on certain lines. That’s not an issue here. I’m not really familiar with Zac Efron’s work in general, so I may not be the best judge there, but both he and Taylor Swift are young enough that there’s no big disconnect between their voices and the characters they’re portraying. Betty White’s voice does immediately call Betty White to mind, but she’s playing a little old lady, much like herself, so that works out all right, too. And casting Danny DeVito as the Lorax was brilliant; he has just the right amount of gruff and warmth in his delivery to bring the character to life — and, like Betty White, there’s not much of a disconnect if while seeing the Lorax we’re also picturing a short, odd-looking humanoid. Rob Riggle was clearly having fun voicing O’Hare, and special mention must be given here to Ed Helms, who voiced both the young and old versions of Once-ler, and was very believable in both incarnations.

Visually, this movie is a treat. In fact, even if the plot were an absolute mess, the visuals alone would still be worth almost three stars. This film is flat-out beautiful, and very, very Seussian. It’s bright, it’s colorful, plastic objects look like plastic and furry creatures look furry. People are rendered in a cartoon-y fashion, making no attempt at realism; this is usually the best approach, and it works well here. And the truffula trees are gorgeous. Hair and fur are not easy to pull off in computer generated graphics. You can either fake it with a planar object and a transparency map, or you can model each and every strand individually. Either way it’s difficult to make it look real, and either way it’s an expensive and time-consuming proposition — there’s a reason why it took Pixar a few movies to start trying it. But in 2012, with the benefits of the advances made by all the studios, it’s possible to make fur and hair that look great. And so the tufts of the truffula trees come to life looking like cotton candy, just as the pages of Seuss’s book depicted them. The painstaking aesthetic designs of the film, combined with shooting it in 3D (computer generated graphics and 3D were made for each other) succeed in doing something very difficult — they transport the viewer into a world that isn’t just unreal, but downright surreal in appearance.

The film is very preachy, but that’s part and parcel with what it is adapting. But it’s also a fun story, told in an entertaining fashion, and is worth seeing just because of how beautiful it all looks. I think this is one adaptation that Dr. Seuss would have approved of.

17 Responses to The Lorax