The Illusionist is a film I’ve been looking forward to seeing since I first heard about it. An animated feature, it was directed by Sylvain Chomet, who also directed The Triplets of Belleville, which I had seen and found hilarious. That The Illusionist was by the same director and was also an animated film with little dialogue was all I knew about it, but I figured the similarities would be enough to ensure an enjoyable experience. Although I was correct in that both are great films, in some ways I might have been better off not knowing the connection, as the two are very different films, and my expectations for the latter film differed from the reality significantly.

Where The Triplets of Belleville is loud, raucous, and wild, and filled with visual gags, The Illusionist is quiet, soft, and very melancholy. The script was written by French actor Jacques Tati and never produced during his life; the main character, the stage magician Tatischeff, is based directly on Tati. And Tatischeff is falling on hard times. The film is set in the late 1950s, and there isn’t much room in the world for a vaudeville entertainer any more. Where Tatischeff once could fill the houses, now he’s lucky to get an audience at all. 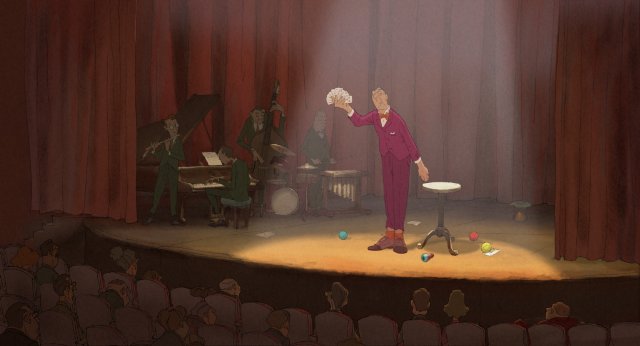 From here, it’s all downhill for the illusionist’s career.

Abandoning Paris, he travels to Scotland, where he eventually winds up at an inn. He does some good business there, but even there he’s eventually supplanted by a jukebox. But while there, he befriends the young girl who works as a maid at the inn. Alice is young, naive, and immediately enchanted by the old man, whose illusions she believes are real. And he takes a liking to her as well, and provides her with new shoes that she needs. When he moves on to his next location, he is surprised to find her tagging along.

This relationship forms the basis of the film, with the two essentially adopting each other as father and daughter. Alice cooks and cleans for Tatischeff, and Tatischeff provides for her. Of course, this is difficult under his diminishing ability to garner an audience, especially as Alice has an admiration for fancy clothes, and he is unwilling to disabuse her of the notion that he can provide anything with a wink and a nod. He starts working odd jobs and taking gigs beneath his dignity in order to provide for her, while she remains unaware that he is anything less than a true magician.

So while there is a heartwarming component to the film, it’s also a very sad picture in a lot of ways. Tatischeff is unable to make a living to support himself performing his craft, let alone provide for two. And the hotel where they stay is filled with other vaudevillians, and Tatischeff appears to be the most successful of the lot. There are colorful acrobats who have to take work as sign painters, a ventriloquist who has to pawn his dummy, and a clown on the verge of suicide. There’s a lot of affection for the old vaudeville acts in this film, but it’s affection with the full awareness that these are art forms whose days have long since passed.

Visually, this is a great example of hand-drawn animation. There’s a simple style to the lines that helps to capture the “grittiness” of the world the illusionist lives in. Light and color are used to great effect throughout the film, highlighting what’s important. Characters’ expressions are clear, and their body language is spot on — important as there is very little speech in the film (and some of that speech is in French). All the moods and conversations in the film are largely inferred by the audience from the mannerisms of the characters instead of the few snippets of language. There are a few scenes in the film in which it is clear that it was drawn with computer assistance — similar to the ballroom sequence in Disney’s Beauty and the Beast — and this is visually dazzling in its own way, giving an appearance of depth and detail to the hand-drawn animation.

Like The Triplets of Belleville, The Illusionist is a great film, with an engaging storyline and a nice visual style, and is proof that animation need not be “for kids”. Unlike The Triplets of Belleville, even though I think it’s great, I can’t recommend The Illuionist to absolutely everybody. It’s more of an art-house film than the other, and although it has a few flashes of laughter, it’s not a comedy; this is, for the most part, a very melancholy film. So it isn’t going to be to everybody’s tastes. But if you don’t mind a wistful homage to the entertainment of the past, this is a very well-crafted film.