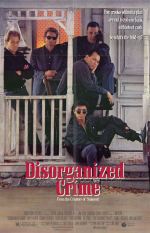 Ah, the heist movie. So many ways it can be approached, so many ways it can be played out. 1989’s Disorganized Crime — written and directed by Jim Kouf, creator of Stakeout — puts a lightly comedic spin on it with the tale of a group of bank robbers who are, as the title implies, not exactly a cohesive unit.

Career criminal Frank Salazar (Corbin Bernsen) thinks he has his new caper all figured out. Far away from his usual haunts in New Jersey, he’s found a modestly-populated town in Montana — with a half a million dollars in the bank. He’s scoped out the town, and gotten himself an abandoned house on the outskirts. He’s checked out the bank, surreptitiously photographed the vault door, and located the security cameras. He’s figured out who he wants on his crew, all guys he’s worked together with on different capers, and put the word out. He’s got everything planned out to a T. Except for getting arrested by a couple of New Jersey detectives who have managed to track him down, before the opening credits are even through. 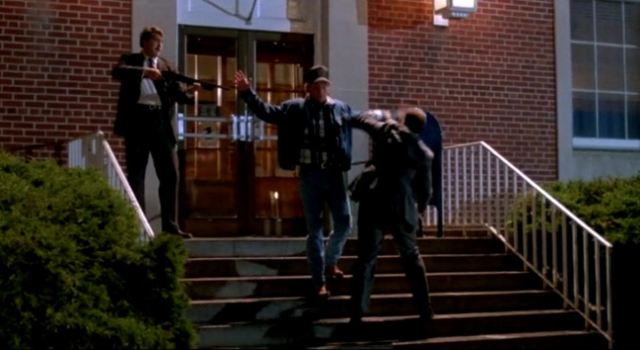 It’s the little details that get you.

Frank’s arrest causes some complications for his crew, as they are unaware of his circumstances; worse, they don’t know each other, having each worked with Frank on different capers. So there is an element of distrust within the group that is only heightened when they reach Frank’s hideout only to find Frank not there. Nick, the safe-cracker (William Russ), wants to bug out and call it quits. The rest of the team insists on waiting to see if Frank turns up the next day. Tempers start to wear thin quickly, particularly with Carlos (Rubén Blades), the hot-tempered lookout. Ray, the wheel man (Lou Diamond Phillips) is the most comfortable of the group, knowing two of the others by reputation, but even he doesn’t know Nick. And Max, the explosives expert (Fred Gwynne), is reasonably trusting of the group, but only on their motivations; he doesn’t trust their youth, as young people “make mistakes”. The group dynamics work well, as there is a variety of personalities involved, and all four of the actors are very believable in their roles. Gwynne is particularly good as the veteran hand, but there isn’t a weak performance in the bunch.

Meanwhile, Frank is causing some trouble of his own. Detectives George Denver and Bill Lonigan (Ed O’Neill and Daniel Roebuck) may be trying to take him all the way back to New Jersey, but that doesn’t mean Frank has any intentions of coming quietly. He breaks loose, and attempts to find his way back to his house, only to get lost in the woods. In some ways, Corbin Bernsen is perhaps wasted a bit, as much of the film relies on his character not being present; his team proceeds to plan the heist without him, and the B-plot is the detectives attempting to track him down. O’Neill and Roebuck provide some comic slapstick, as the detectives attempt to track Frank through the woods, with O’Neill providing the bulk of the lost dignity. 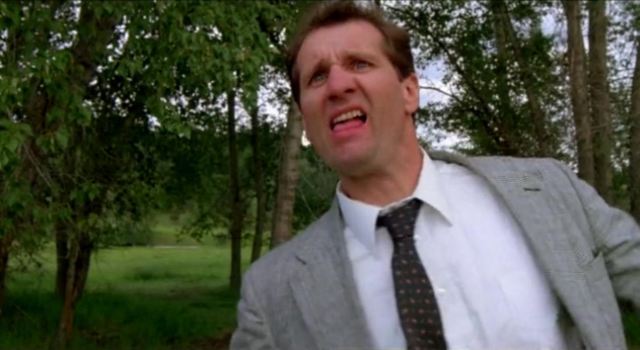 Sacrificing his dignity is, of course, an Ed O’Neill trademark.

The two plots collide hilariously about mid-way through, with the two groups interacting without ever being aware of each others’ existence. The crooks need to pull off several smaller crimes to set up their scheme, and the detectives blame these on the escaped Frank Salazar, sending them on a wild goose chase though-out the town. Hoyt Axton has a small role as the town sheriff, and does a good job of using his few lines to make it clear that he thinks these two Jersey detectives are a pair of clueless idiots. Of course, it becomes perfectly clear that none of these visitors are equipped to deal with life in a rural town, as the crooks have their own problems just making their way around.

Disorganized Crime has some definite room for improvement, in that the dialogue of the characters doesn’t have quite the same “zing” to it that characterized Stakeout. Some more screen time for Hoyt Axton’s character might have helped out there; as it was, most of the sarcastic remarks about the detectives’ competence was self-inflicted by O’Neill’s character. While it’s a slapstick tradition that the worst things happen to the smartest character, the downside of only having the relatively dim Bill to interact with meant that there wasn’t anybody to capitalize on George’s misfortunes with a witty one-liner. Still, this is a case where criticisms of the film come down to what it could have done better, and not what it did wrong; there aren’t any serious flaws with the film, and it kept me entertained both as a heist film and as a comedy.