Another one from the fog banks of my childhood memory. I know I saw Ernest Goes to Camp when I was young — probably the year it came out on video (it was released to theatres in 1987). But I remember very little of it beyond, of course, Ernest himself, who was already pretty indelible from his commercials (and who is one of the very few successes in the “Let’s turn a pitchman character into a movie or TV show” genre.) Despite my brother and some friends absolutely loving Ernest P. Worrell, I somehow never saw the film after that one mostly-forgotten viewing, and have never seen any other Ernest film. A $5 DVD three-pack allowed me to rectify this situation, so at the very least I wouldn’t have to put up with any further ragging from my friends about not having seen it (my friends are, as you might guess from my own leanings, very insistent upon seeing all the popular films from the 1980s and most of the unpopular ones as well.)

There’s an art to making a comedy about stupid people, and I think it’s been virtually lost nowadays. As the Three Stooges knew very well, you have to be pretty smart to be funny at being stupid. It takes work, it takes timing. It takes some planning beyond “ha ha, this guy is dumb.” I’m not convinced that, for example, Ben Stiller is smart enough, and I’m pretty sure Rob Schneider isn’t. But Jim Varney, the man beneath the khaki cap of Ernest, seems to know what he’s doing.

The face of a man who studied Shakespeare. Actually not joking.

The movie has a pretty simple and fairly standard plot. Ernest is a janitor at Kamp Kikakee, and dreams of being a counselor. He gets his shot when a state program to reform juvenile delinquents dumps a half dozen boys from the local reform school on the camp, and the other counselors refuse to have anything to do with the kids. This being a 1980s comedy for kids put out by Buena Vista (i.e., Disney), and not a cynical subversion of today, the kids start out pranking him but eventually take a shine to the odd incompetent goofball. One nice touch among all of this is that the delinquent kids aren’t the only trouble makers in the camp; realistically, after all, there are a lot more obnoxious jerks that don’t go to reform school than there are ones that do. The kids fight with other kids, get pranked, pull pranks, and Ernest tries very earnestly to maintain some control while having no clue what he’s doing. There’s also some of the typical “just plain weird” antics of crazy characters, especially the chefs Jake and Eddie (Gailard Sartain and Daniel Butler), who specialize in the inedible. I didn’t enjoy them quite as much because they were a bit more one-note, but they’re still worth a laugh or two.

Of course, there also has to be a threat to the camp. Kamp Kikakee is on land owned by Chief Wind Cloud, next-to-last member of his tribe. Iron Eyes Cody finishes out his film career the way he lived it, pretending to be an Indian. Well, I suppose I can forgive that, since he does an entertaining job and always seems respectful of the heritage he’s aping. Victoria Racimo plays his granddaughter, the camp nurse (her first name is never given; she’s simply referred to as Nurse St. Cloud the whole time. Why she’s “St. Cloud” when he’s clearly being called “Wind Cloud” is unclear.) She is also his primary translator — Ernest being the only other person who can translate for him, though in at least a few scenes Chief Wind Cloud gives the impression of understanding English but simply choosing not to speak it.

Possibly he thinks speaking English is beneath him, or maybe he just thinks the people he’d have to speak it to are beneath him.

A lawyer (Richard Speight Jr.) for a nearby mining company has been trying to convince him to sell the land for mining. When he refuses, the company owner, Sherman Krader (John Vernon) takes things a step further and employs some underhanded tactics to get his hands on the rights to the land. It’s up to Ernest and the kids to save the day.

Being a comedy about a fairly dumb guy, there’s a large amount of slapstick in this film. Slapstick is all about timing, and Varney actually plays with that. Ernest P. Worrell is a fairly laid-back, easy-going guy… and the slapstick usually plays out in the same laid-back fashion. While a lot of slapstick gets its laughs out of the surprise, Ernest Goes to Camp has most of the pratfalls and calamities play out a bit more slowly with an easy-going sense of inevitability. It’s a different way of getting laughs out of slapstick, but it does get the laughs. And impressively, the big finale features a reprise of just about every slapstick gag used in the film, but not as a straight-forward repeat. From the exploding toilet to the snapping turtle, it all winds up getting weaponized against the mining company. (The film also earns bonus points for a military-orchestra styling of “Happy Together”.) 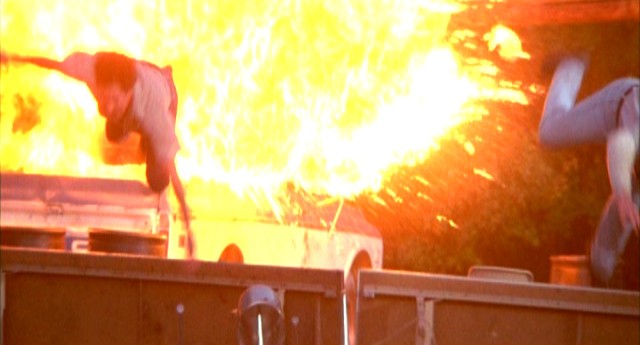 Blowing things up is a time-honored camp activity.

Ernest is a dumb character, and in a lot of ways this is a dumb film. But it’s a fun dumb comedy, and a lot of its stupidity is played out very intelligently. We’ll be seeing Ernest again on this blog, since it was after all a three-pack. But I’m not dreading that at all. At least in the early installments, it’s possible they could maintain the same sense of goofy fun.

4 Responses to Ernest Goes to Camp