In the 1980s, Disney’s animation department was not in a particularly good place. The last few pictures hadn’t been particularly successful critically or commercially. Reportedly, there was even talk of abandoning the department (though it seems like Disney without animation would be a grand example of shooting oneself in the foot.) In 1986, the film The Great Mouse Detective was released; while it did not kick off what would become the Disney Renaissance, it did start laying the groundwork, being a relatively successful film and confirming that Disney could still be profitable producing animation.

Somehow, despite being a kid in the 80s whose parents bought and rented many Disney pictures, I never saw The Great Mouse Detective (nor the next feature, Oliver and Company). I suspect this may have been due to my parents’ tendency to rent films for us when we were sick and home from school, and my tendency to get sick less often than my siblings. So I missed out on this film for many years, and just recently was able to rectify that situation. I’m glad I did.

Like several of the Disney features immediately preceding it, The Great Mouse Detective is based off of a relatively recent work instead of a fairy tale; in this case, Eve Titus’s Basil of Baker Street children’s books, which started in 1958. Basil is a mouse version of Sherlock Holmes, living in fact under Holmes’ basement at 221 B Baker Street. (Holmes himself even makes a cameo appearance in silhouette in the film, with a clip of Basil Rathbone used as the voice). The entire Victorian era feel of the Sherlock Holmes stories is replicated in miniature in mouse civilization, beneath the notice of humanity.

The case starts off with the kidnapping of toymaker Hiram Flaversham, voiced by Avery Young, whose best-known work is probably as the voice of Scrooge McDuck in various Disney works, including Duck Tales. He uses the same Scottish brogue here as Flaversham. His daughter Olivia is voiced by Susanne Pollatschek, who has no other roles to her credit; presumably a child actress, as she was nominated for a Young Artists Award for the role — and earned it, as her portrayal of Olivia comes through in the voice as a worried, but obstinate child. Olivia seeks out Basil of Baker Street to find her father, and after becoming lost is found by Doctor David Dawson (Val Bettin), who leads her to Baker Street. He’s never met Basil before either, but it doesn’t take a great detective to see he’s going to be the Watson equivalent.

Which is to say, greatly put-upon.

Basil himself is much like his human equivalent: cerebral, prone to fast deductions without explaining the intervening steps, and not very good with people. He’s a bit boorish, more than a bit stand-offish. He wants nothing to do with Olivia’s case at first, softening only a bit when learning she has no mother; what truly gets him interested is learning that her father was kidnapped by a peg-legged bat. Before then he’s lethargic and morose after failing once again to catch his adversary, Professor Ratigan; but as the bat is known to him as Fidget, Ratigan’s henchman, he realizes the case is connected to his goals. (Fidget is voiced by Candy Candido, who provides some of the humor of the film with his sotto voce remarks). He takes the case but still comes across as stand-offish to Olivia, not wanting her along (though she comes, of course), and not bothering to get her name right. (“Miss Flamchester!” “Flaversham!” “Whatever.”) While working the case, he zig-zags between despondency and cheer like a manic-depressive, and in general gives both Olivia and Dawson question to doubt his sanity. All of this is brought to life wonderfully by both the animation team and the over-the-top voice acting by Barrie Ingham.

Not quite the expression of a guy you’d trust to get you out of a death trap.

Of course, if Ingham is a bit hammy in his portrayal of Basil (in a good way), this is only to keep up with his villainous counterpart. Just as Holmes has Moriarty, Basil’s counterpart is the equally hyper-intelligent Professor Ratigan… who is voiced by none other than Vincent Price. Voicing a Disney character was supposedly a life-long dream for Price, and it’s very obvious he’s having tremendous fun with the role here. Every line is delivered with a sinister smarminess that’s just on the verge of breaking out into laughter, and the animators observed Price’s wild movements while recording his lines and worked them into the animation for the character. Being a Vincent Price fan, I’m obviously pre-disposed to like this, but even so this is a very fun villain to watch. He’s also a villain who is credible as a threat, with schemes planned out in advance whose only fault is that he’s just not quite good enough — or perhaps lucky enough, depending on how you look at it — to avoid having them foiled by Basil. Even the traditional villain flaw of not staying to watch the death trap go off is at least justified — he’d been expecting Basil to be 15 minutes earlier, and now he simply doesn’t have time to stay and watch Basil’s death if he still wants to be on time to put his scheme in motion. He expresses some disappointment about this (“Trouble with the chemistry set, old boy?”) All in all, he seems more on top of things than Basil does for most of the film, with the exception of when somebody calls him a rat instead of a “big mouse”, which is a sure way to get his goat.

Though one would think he might choose a different pseudonym than Ratigan if it bothered him so much.

He also gets two of the three musical numbers in the film, both with Vincent Price himself singing. “Goodbye, So Soon” is mostly just there as background music while the death trap winds up (though it does get a reprise during the end credits), and “Ratigan, the World’s Greatest Criminal Mind” is a fun, kind of catchy, villain song. The third song in the film, “Let Me Be Good To You”, is well done but comes across as being just a bit strange and out of place, being essentially a burlesque number in a children’s animal cartoon. In fact, coupled with the drinking and smoking characters do (both heroes and villains), it’s a little surprising the censors didn’t come down on this film a bit. It’s even a little surprising the Disney executives allowed it; given the time-frame, however, it seems likely they had their hands full trying to get The Black Cauldron to be suitable for children. Katzenberg reportedly took a direct hand in editing that film; here, his main contribution reportedly was changing the title from Basil of Baker Street. Of course, the film did have four directors of its own (Ron Clements, Burny Mattinson, David Michener and John Musker), so it wasn’t exactly light on executives. 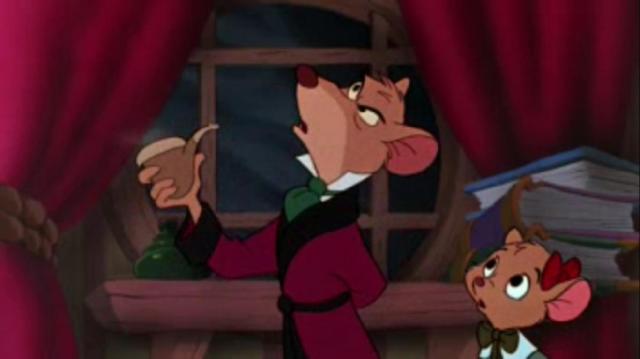 The Great Mouse Detective is a fun romp; it’s a bit thin on the “mystery” side of a mystery story, but it’s a relatively short children’s film, so expectations have to be adjusted in that regard. It also holds up pretty well artistically; the expressions of the characters are a treat, and scenery is often full of background details for the careful eye. As a historical note, it’s the second Disney film to feature a significant usage of computer-aided imagery; The Black Cauldron used it for some special effects, and in The Great Mouse Detective it was actually used to plan out the scene in the clock tower. Animators created the motion of the gears on computer, and then hand-traced the images onto the animation cels. Since it’s still hand-drawn, it blends well, but the intricacy of it was a tip-off that it had computer graphics in its planning; it looked like something that, nowadays, would probably have been blatant CGI even if the rest of the film were traditionally drawn. But with the trace technique, it doesn’t look out of place, just very well done.

I know The Great Mouse Detective isn’t quite as celebrated as classics such as Snow White and the Seven Dwarfs, or Disney “Renaissance” films such as The Little Mermaid. But I still found myself greatly enjoying it, even as an adult who had never seen it before. It’s a great, fun film, with characters that aren’t just voiced, but actually voice-acted to the point where the actor’s influence is obvious on the character. It’s definitely one I would enjoy watching again.