A few weeks ago, the movie Touchback was released to U.S. theatres. I haven’t seen it yet, but I did note its importance in one particular aspect: with the release of that film, Kurt Russell joins the fairly small club of actors who have had roles in films spanning six different decades. What’s particularly interesting is that this isn’t even a case of “oh, he had a minor cameo in a few films each decade.” He’s actually had starring roles in at least one film for every decade from the 1960s onward.

If you’ve stopped to realize that Kurt Russell is only 61, it should become obvious that some of those early roles were as a child star, or rather, a teenage star. In particular, Kurt Russell had several roles in Disney live-action family comedies. In 1969, he starred in the first of a trilogy of films about college student Dexter Riley (spelled Reilly in the first film, but later films changed this). The first film of the three was The Computer Wore Tennis Shoes, directed by Robert Butler.

Dexter is a student at Medfield College, a small private university with some serious budget woes. Professor Quigley (William Schallert), one of the science professors, has been trying to get budget approval for a computer for the school, but Dean Higgens (Joe Flynn) refuses to spend the $10,000 necessary to buy it. Dexter and his friends, eavesdropping through a hidden walkie-talkie, are upset over the loss — partly because they think it would be fun, but largely because Quigley is one of the few faculty members they really like. Quigley stands up for them, encourages them; Higgens wants to put the lot of them on academic probation given their chronically low test scores. To make Quigley happy, and to tweak Higgens’s nose, Dexter and his friends decide to get local businessman A.J. Arno (Cesar Romero) to donate a computer for the lab. 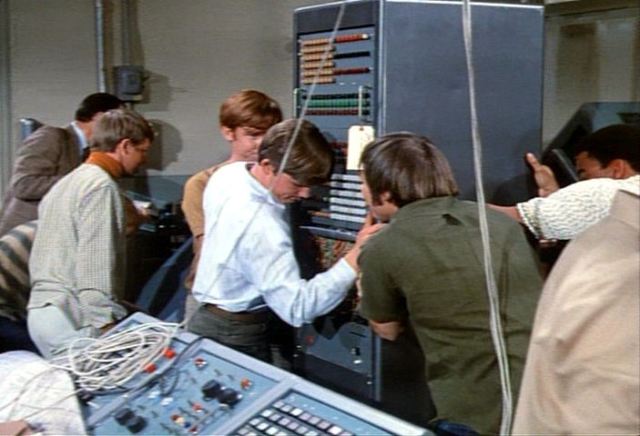 Computers today are smaller, cheaper, and considerably more common.
You may even have one near you right now!

Here the film takes a slight light-hearted science fiction bent. While replacing a part in the computer, after coming in from a rainstorm, Dexter gets an electrical shock. The next day at school he aces a test in four minutes that nobody else has ever been able to finish in an hour and a half. After some investigation, the professors and doctors come to the astonishing conclusion that Dexter has somehow had the computer’s memory banks and calculative abilities transferred into his brain, becoming, in effect, a living computer. There are a lot of flights of fancy in this scenario, but that’s OK. This isn’t meant to be hard sci-fi, it’s meant to be a fun kid flick. And with Dexter finding himself being propelled into stardom, recruited into college bowls, and chased after by the criminal underground, it succeeds at that.

The most skilled acting in this film comes from the adults, which isn’t too surprising. Cesar Romero as A.J. Arno is one of the highlights of the film, acting suave and ruthless often at the same time. Richard Bakalyan, as “Chillie” Walsh, is a memorable friendly sleazeball. And Joe Flynn is funny in an understated way as the neurotic Dean Higgens; he plays well off of Schallert’s more down-to-earth Quigley, and the gloating Dean Collingsgood (Alan Hewitt). The kids, however, are mostly just standard kid roles. It’s not that the kids are bad actors, it’s just that the roles were essentially written as “kid #1”, “kid #2” and so forth. There’s little room for personality or standing out. Other than Dexter, the only kids to really have any prominence are his best friend Pete (Frank Webb), who is the leader of the group when Dexter’s not around; and Dexter’s girlfriend Annie (Debbie Paine) — and she’s only distinguished by virtue of being the sole female in the group of friends to get lines. 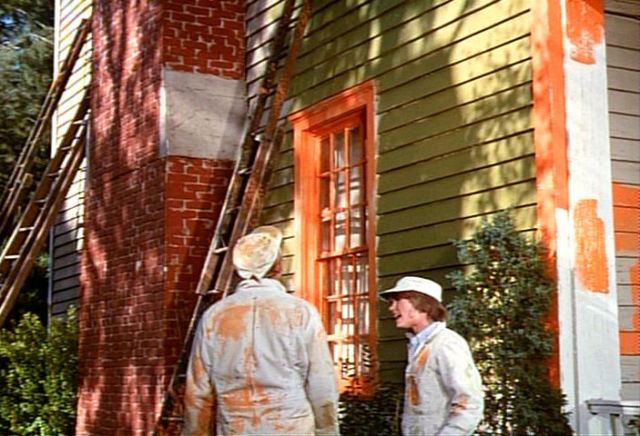 Kurt Russell himself as Dexter is interesting to watch, knowing him from his later roles. Like Webb, Paine, and the rest of the actors playing the college students, the role doesn’t seem to really have been written for any particular actor. It’s a plug-and-play slot, and Russell happened to be the one who got plugged in. So he’s a clever kid, but not book smart (until the incident), clean cut, and a bit of a wise-ass but well-meaning. A fairly standard template for the character type, and Russell isn’t yet nuanced enough of an actor to elevate the role beyond that, or to strongly influence it with his own personality. He hasn’t yet acquired that air of amiable scruffiness that personifies his work. And yet, every so often, there’s something in his expression or delivery that reminds you this is Kurt Russell. A little bit of a self-deprecating tone, a bit of “can you believe this guy?” with some of his lines. He’s not a great actor yet in this film, but he’s a competent one, and it’s possible to see the beginnings of his acting style start to take form. 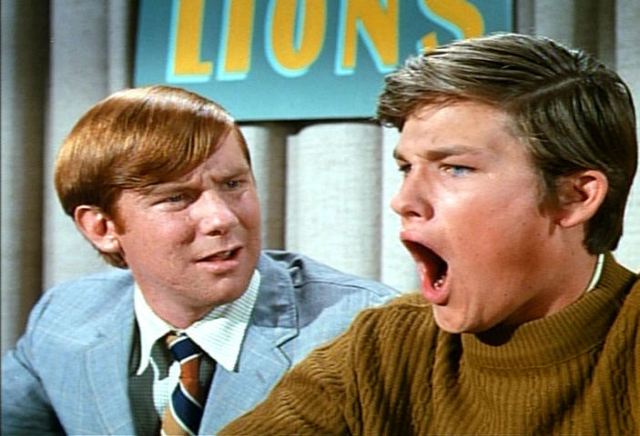 As well as his love of hamming it up.

The Computer Wore Tennis Shoes isn’t a laugh-a-minute riot, or hard-thinking science fiction, or really anything but simple, family-friendly fare. But it’s entertaining. It has some laughs, it has fun moments, and fun concepts that it plays with. And it’s always fun to see an early work from an established actor, especially when it’s a career that stretches as long as Kurt Russell’s.