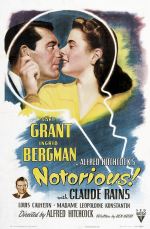 It’s been a little while since we’ve talked about Alfred Hitchcock here, so I thought it was time to queue up another one of his films for review. This time it’s the 1946 film Notorious, starring Cary Grant and Ingrid Bergman, and widely regarded as a classic.

Ingrid Bergman plays Alicia Huberman, daughter of a German-American who placed more emphasis on the “German” part than the “American” part and betrayed the United States, providing financial aid to Germany during the war. Alicia does not share her father’s politics; in fact, she seems to want nothing to do with politics at all. She would much rather spend her days and nights socializing and carousing. All that changes when she is visited at one of her parties by a man called Devlin (Grant).

It’s always the uninvited guests that wind up causing trouble.

Devlin is an agent for the U.S. government (which agency is never specified), and his boss, Paul Prescott (Louis Calhern) has given him the assignment to recruit Alicia. As she is known to be loyal to the U.S. (due to some conversations with her father that were recorded by bugs), but has believable ties to a German traitor, Prescott feels that Alicia is an ideal asset for spying. Several German agents and scientists have relocated to Rio de Janeiro (a move mirroring the real-life escape of several Nazis to South America), and appear to be meeting. Prescott fears they are attempting to restart the German war effort from there. Alicia’s job will to be to win her way into the confidence of Alex Sebastian (Claude Rains) and discover exactly what is going on; this is complicated, of course, by Sebastian’s jealousy of his new lover, his mother’s suspicions, and the fact that those jealousies and suspicions are fully justified with Alicia not only being a spy, but also having fallen in love with Devlin (who is not reciprocating).

This is a very dialogue-heavy film; in fact, little happens beyond conversations, but it’s no less interesting for that. This is largely because of the quality of the performances. Grant and Bergman are screen legends, of course, and each does a flawless job embodying their character. More importantly, they have incredible on-screen chemistry together. The chemistry between Bergman and Rains is appropriately more one-sided; it’s easy to pick up on the attraction Sebastian has for Alicia, and his jealousy of her, as well as the fact that Alicia is only pretending to be in love with a man she secretly loathes. Rains was nominated for a Best Supporting Actor award, and it’s not hard to see why; he does a very good job at portraying a genteel aristocrat who is simultaneously smitten, jealous, cowed by his overbearing mother, and plotting to make war. The character is well-developed as both sinister and somehow pathetic, and it’s more down to Claude Rains’s performance than to the dialogue.

And he actually gets to be on screen for his starring role this time.

Leopoldine Konstantine plays Sebastian’s mother, and even though I haven’t yet seen Psycho, it’s difficult not to think Hitchcock has a fascination with villains with mother issues. Mme. Sebastian cows her son, browbeats him, and is constantly suspicious of his paramour. In a film filled with Nazis trying to restart the German war machine, she is the evillest character on the screen, ready to plot and scheme against anyone who dares to present an obstacle to her. Her one virtue, if it can be called that, is that she appears to be doing it all for the welfare of her son. But then you have to remember who and what the son is, and it seems rather less virtuous.

Do I need to discuss the directing of the film? It’s Hitchcock. Scenes are shot perfectly, sounds are arranged deftly. There’s a clever bit when a seriously hungover Alicia is looking at Devlin, and the camera slowly rotates around to show the room spinning. And there isn’t much cruft in the film, hardly any time spent that doesn’t advance the plot. In a way, one of my few complaints about the picture is that there isn’t enough cruft; plot elements come in and end with a certain perfunctory timing that feels just a little unsatisfying. My other complaint is that the spies seem to be poor at planning things out; this is understandable for Alicia, but not so much for the more experienced Devlin, and even Alicia could have handled a few things better in some obvious ways. Even so, this is still a very good film; a film noir piece where the excitement and tension comes exclusively from the dialogue and interaction between the characters.