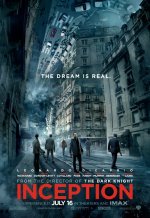 Given the title of the film, it may be a bit ironic that I’ve been having a bit of trouble figuring out where to begin with my review of Inception. There’s a lot I feel like I want to cover, and yet at the same time, I don’t want to spoil anything for people who haven’t seen it. Director Christopher Nolan is known for producing some very cerebral films, and his 2010 effort is no exception. Just keeping track of everything that’s going on in Inception requires your brain to constantly be whirring along, taking note of everything and trying to figure out what’s coming next. Some films suffer when this happens, others aim for it and it can be a virtue; Inception falls into the second group.

Fortunately, it’s possible to discuss the basic premise without spoiling anything significant. Anybody who has seen any of the promotional materials, from posters to trailers, will have at least the notion that it has to do with entering dreams. The plot may be intricate, but the premise itself is fairly straightforward.

Joseph Gordon-Levitt and Leonardo DiCaprio, about to hold up the corporate headquarters of Brylcreem.

Leonardo DiCaprio plays Dominic Cobb, a dream “extraction specialist”; his job is to enter peoples’ dreams and engage in illegal corporate espionage, stealing secrets from the subconscious minds of the dreamers. His partner is Arthur, played by Joseph Gordon-Levitt. After a heist goes awry, they find themselves hired by their former target, Mr. Saito (Ken Watanabe), with an unusual proposition. Saito wants them to attempt an act of inception — the planting of an idea — in the mind of one of his business rivals, Robert Fischer (Cillian Murphy). Arthur says inception is impossible; Cobb disagrees, stating that although it’s extremely difficult, it can be done. He’s done it.

It’s not an extraction, but it’s still basically a heist caper by its nature. And so they assemble a team of unusually-named people in order to pull off the job. Eames (Tom Hardy), forger and impersonator. Yusuf (Dileep Rao), a chemist who can make the sedatives they need to enter the dreams. Ariadne (Ellen Page), an architect to design and manipulate the dreams of the subject, introduced to Cobb via his father-in-law (Michael Caine in one of those small-but-well-acted roles he does so well). Ariadne (named, appropriately, after the Greek mistress of the Labyrinth) is the most important of the three, and the one that gets the most character development. In addition to serving as an audience surrogate for Cobb and Arthur to explain things to, she also plays an important role as someone to argue with Cobb and Arthur, and to figure out solutions to the problems that arise. The movie wisely doesn’t try to pair her romantically with anybody; though there is some chemistry between Page and DiCaprio, and their characters, their relationship remains platonic even as Ariadne comes to understand Cobb better than anyone else on the team does.

While the other team members are always around, and feel like fully realized characters, Cobb, Arthur, and Ariadne form the core of the group and the film’s focus. And each of the three has a “totem”, a unique personal item that helps them to know when they’re in somebody else’s dream, as another dreamer would be unable to get the exact details of the totem correct. (Presumably the other team members also have them, but we never see them.) The three totems each have some symbolic significance. Ariadne fashions a metal chess piece for herself; like a chess game, she has to constantly be thinking multiple steps ahead, several layers deep. Arthur has a loaded die; he doesn’t like to take unnecessary risks and tries to eliminate wayward chance. And Cobb has a metal top; he’s always trying to keep moving, to keep himself in balance. But tops always tumble in the end… and his totem has another significance in that it originally belonged to his wife, Mal (whose name I misheard as “Moll”, short for Molly; the actual spelling has some additional significance.)

Bad, in the Latin.

Dominic Cobb is literally haunted by the grief and guilt over his wife’s death, which he feels responsible for. When he enters dreams, a projection of Mal (played by Marion Cotillard) enters with him… and as the manifestation of his self-directed anger, she interferes and fights him.

Between Cobb’s psychological issues, Ariadne learning the ropes of dream navigation, and the caper itself, Inception has to juggle several plot elements, keeping them all in the air. It manages to do so in a way that is always interesting and entertaining to watch; even when there are some artistic slow moments, they’re interspersed with more active scenes to keep things going. It weaves several different segments together, requiring the audience to pay attention and follow along, but it doesn’t get confusing. While Inception is as labyrinthine as the mazes Ariadne makes, all the audience is required to do in order to understand is simply to be attentive. This is no difficult task, since what’s going on is always interesting to watch. Nolan fills the film with special effects, both CGI and practical effects, and there are several good action set pieces. The dreamscape plays out with danger and excitement and a touch of surrealism all in one, like an actual dream, but one of the sort that leads to the dreamer waking up in a sweat. It’s a very well-directed film, and a lot of fun to watch.

The actors do their part as well. The minor members of the team don’t get a lot of time to shine, but their actors manage to inject a sense of personality into each of them despite their limited roles. Eames is cocky and flippant, Yusuf a bit nervous, Saito is efficient and determined. They’re “broad strokes” characterizations, but for characters who aren’t the focus, they work well enough. The leads all shine. DiCaprio has become one of Hollywood’s best over the last several years, and Gordon-Levitt is on his way to becoming one. There’s an easy familiarity between the two on screen, where even though their characters have differing views on how best to approach things (Cobb is far too willing to take risks for Arthur’s tastes) there is still a sense that they have been partners for some time and will continue to be partners. Ellen Page makes Ariadne seem like an interesting character in her own right, letting her serve as the audience surrogate for explanations without coming across as the naif or someone who needs to be carried through the plot. Rather, the film takes the position that an intelligent person being newly introduced to these concepts is going to start picking at them, and Page portrays this seamlessly.

Inception is a thought-provoking film, one that engages the audience’s mind and imagination and doesn’t entirely let go even after the credits start rolling. It’s shot wonderfully, with great special effects. The characters and the plot are both engaging. It is an excellent movie, and it may be Christopher Nolan’s best to date.