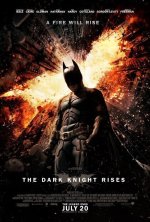 When I first saw the trailers for Batman Begins, I felt a mixture of anticipation and apprehension. I wanted a new Batman movie, one that would be true to the character as well as being a good movie overall. But there was a risk that a relaunch of the franchise would pander to the worst excesses of Tim Burton’s take on the character; it’s very easy to go overboard on the darkness and grimness with Batman, and the trailers for Batman Begins gave the impression it could happen again. And then the movie came out, and I loved it; it’s one of my favorite films.

When the trailers for The Dark Knight hit, I again felt that same mixture of emotions. Christopher Nolan had delivered a greater movie than I had anticipated before, but I knew from experience that sequels seldom held up to the original. And Heath Ledger didn’t look like what I think of when think of the Joker; in fact, his appearance would have fit in with the macabre and wretched appearance of the Penguin in Batman Returns. I had a legitimate concern that the sophomore effort for the franchise relaunch would fumble the ball. But Ledger turned out to be a fantastic Joker, and the movie was exceptionally good. It also would become one of my favorite films.

Four years later, and it’s 2012; trailers come out for The Dark Knight Rises. And again, the trailers seem a bit off, and don’t seem to generate excitement. (I know people were excited about The Dark Knight Rises, but my honest assessment is that the excitement existed independently of the trailers.) I had learned enough to not lose faith in Nolan, but I also knew it was still possible to flub the third act. And Bane has never been my favorite Bat-villain. But I shouldn’t have worried. Nolan has done it again.

It’s not a perfect film; I should get that out of the way immediately. It has a few problems, and by and large they have to do with the primary villain, Bane. I may be showing some bias — as I said, Bane has never been my favorite villain — but I don’t think I’m stretching things to say that Bane is the least interesting major villain in the trilogy. Even his motivations here wind up being tied back to a more interesting villain, in that Bane is attempting to finish what Ra’s Al Ghul (Liam Neeson) started in the first movie. (I’m trying to avoid major spoilers here, but I think that one’s OK, given the “I am Gotham’s reckoning” line from the trailer). His mask presents some problems with how he comes across; yes, it makes him look intimidating, but it also limits actor Tom Hardy’s ability to emote. His voice also presents a bit of an issue; dubbed over and mechanically altered, he sounds like somebody using a voice modulator to sound like Sean Connery. It makes him just a bit harder to take seriously, and it’s made worse by him occasionally being a bit of a mush-mouth. He’s hard to understand in places, and in a film where the villain’s dialogue is a large part of what makes him an interesting villain, this is a hindrance.

Anne Hathaway plays the other major costumed player in the piece, as Selina Kyle, the Catwoman (though she’s never referred to by her code-name in the movie). Hathaway is great as Kyle; she looks the part (and the costume design is perfect for a realistic take on Catwoman), and she is capable of displaying the necessary range from capricious whim to genuine concern for others. The character is portrayed as she is in the comics; with dubious ethics, but a more moral core than most “villains”.

The regular cast of the previous two films all return, with Gary Oldman as Commissioner Gordon, Morgan Freeman as Lucius Fox, and Michael Caine as Alfred. Even Cillian Murphy comes back to once again give a cameo as Jonathan Crane, the Scarecrow. And, of course, Christian Bale as Bruce Wayne, Batman. All get their moments to shine, though it’s obviously Bale’s show for most of it. Like Batman Begins, The Dark Knight Rises focuses heavily on Bruce Wayne rather than Batman for a large part of its run time; perhaps appropriately, because after eight years of “retirement” in the story, it is also about Bruce Wayne becoming Batman. The tie-ins with the earlier movies are handled very well, as the characters have to face the consequences of their decisions from both of the prior movies. In a genre where the end of a movie often spells the end of all repercussions, it’s refreshing to see some things come back to haunt the main characters.

There are a couple other new characters and new actors thrown in as well; of course, both of them are familiar to Christopher Nolan fans, as Nolan continues his habit of using the same actors in different films (in this case, both showed up in Inception previously.) Marion Cotillard plays Miranda Tate, an environmentally-oriented businesswoman who Bruce Wayne becomes involved with while trying to rebuild Wayne Enterprises. Cotillard plays the character well, and she’s reasonably interesting; the one flaw here is that not quite enough time and development is devoted to her to make the audience care as much as the movie wants them to by the climax of the film. No such problem exists with Joseph Gordon-Levitt’s character, Detective Blake. He’s a sharp character, resourceful, and manages to call out both Batman and Comissioner Gordon on some of their own wrong-doings. And he’s as heroic as either of those characters; by the end of the film, the audience in the theatre I was at were cheering him as much as they were cheering Batman.

I haven’t written much about plot yet, and I don’t plan to go into details. I would prefer to avoid spoiling it for anybody. Suffice to say that this is the third part of a trilogy, not just the third part of a series. It’s a concluding story. On its own, it holds up well as a story, but it is meant to bring a close to the story that Christopher and Jonathan Nolan have been writing. And it does that in a way that I think should satisfy any fan of the character, and any fan of Nolan’s trilogy. It leaves things in a place where the story is definitely finished, but where fans can imagine the continuation. Perhaps just as importantly, it leaves things in a place where it’s possible for Warner Brothers to have a new Batman franchise, and go in any direction they want to, without depending on this trilogy but at the same time without having to explicitly contradict this trilogy, much like the two Hulk films are neither relied upon nor contradicted by The Avengers.

The film is still settling in my mind some, but I think I would still place the second movie, The Dark Knight as being the best of the trilogy. As my brother stated when I discussed it with him, the first movie had to deal with starting the franchise, and this one had to deal with ending it, while the second movie didn’t have to worry about any of that and could simply be Batman. But that should not be taken as a slight against The Dark Knight Rises. As a movie, it is a very good movie. As a conclusion to the trilogy, it’s a great conclusion, satisfying and appropriate to its series. I have to admit I am uncertain whether I would award it four or five stars on its own; it does have some noticeable flaws, but it felt like a great movie while I was watching it. At the same time, though, I know I sometimes get swept up in “the moment” when viewing a movie like this on the big screen. So for its own sake, I would be undecided here. But it’s not a standalone movie. It was meant to close out a trilogy, and as the conclusion to a trilogy, it is a great film. We finally have three great movies in a row in a single superhero franchise. There’s finally a superhero trilogy that really feels like a trilogy, like one cohesive whole. And Nolan is still hitting 100% with me.

21 Responses to The Dark Knight Rises