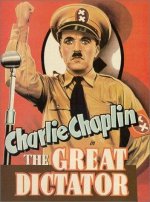 It’s been remarked on by more than a few people that there was a passing resemblance between Charlie Chaplin and Adolf Hitler, particularly brought on by the mustaches. Among the people who remarked on it was Alexander Korda, a filmmaker and a friend of Chaplin’s. Chaplin decided to use the resemblance to create a film to satirize Hitler and Nazi Germany, and The Great Dictator was the result.

Chaplin wrote and directed the film, as was his usual process, and starred in the film. In this case, this meant playing two roles; one role as Adenoid Hynkel, dictator of Tomania, and the other as an unnamed Jewish barber who, after an injury during the first World War, spends years in the hospital before recovering and returning to his Tomanian home town. The barber bears some resemblance to Chaplin’s famous Tramp character, particularly in light of the fact that he’s a more innocent character than most of the people around him. But where the Tramp was simply a goodhearted naif, the barber’s innocence is more due to his long illness; he simply hasn’t been around to see what has happened to his home in his absence.

It is difficult to play the disillusionment of a good man for comedy.

Chaplin’s two roles provide two different through-lines for the film. The Jewish barber attempts to live his life in the Jewish ghetto of Tomania, but is hampered by periodic incursions of Tomanian stormtroopers who have a policy of harassing Jews. He finds some happiness in the love of the strong-willed Hannah (Paulette Goddard, playing a character with much more personality than most of Chaplin’s love interests), but it’s difficult when every day it seems like there is more suffering to cope with. His optimistic spirit is contrasted with his neighbors, particularly the pessimistic Mr. Jaeckel (Maurice Moscovitch). The barber is almost a little out of place, a free spirit, cheerful in the face of difficulties. As stated above, he is reminiscent of the Tramp, in that he’s almost childlike in his innocence and joy.

Adenoid Hynkel, on the other hand, is more of a psychopathic man-child. He burns with an irrational hatred of the Jews and of non-blondes — even though he himself is dark-haired. Here Chaplin shows his range, with a character that is as far from the Tramp and the barber as possible without actually showing him killing anybody. That his fake German rants are a parody of Hitler’s spittle-spewing speeches is immediately obvious. They’re also pretty funny, even though they’re complete gibberish. And everything about Hynkel’s mannerisms and behaviors seem to be perfectly calculated to skewer Hitler’s dignity in as pointed a manner as possible.

Notions of world conquest seem less intimidating when set to a balloon dance.

Hynkel has a few foils among his allies to play off of as well. There’s Herring (Billy Gilbert), who is comically inept, and Garbitsch (Henry Daniell) who seems to be the sinister power behind the throne. And most importantly, there’s the dictator of the nearby nation of Bacteria, with whom Tomania has a shaky alliance. Clearly patterned to make fun of Benito Mussolini, Napaloni is played by Jack Oakie, and his over-the-top interactions with Chaplin’s character result in some of the funniest sequences in the film.

But it’s difficult to laugh too hard at a film that is essentially about atrocities. The film was made and released before the full scope of what the Nazis were doing to the Jews was known — the concentration camps were known about, but not that the Jews were being systematically executed within the camps (the camps in The Great Dictator are shown to be work camps). Chaplin would later say that if he had known the full extent of the Holocaust, he would not have been able to go through with making the film. But even what is shown in the film is tragic enough to provide some major mood whiplash when contrasted with the comedic sequences. Jews are forced out of their homes, sent to concentration camps, their shops are burned, their goods confiscated… this may be a comedy, but it should not be doubted for a second that it is also a very serious film.

It has a few things to say about prejudice, of course. Besides the obvious statements about how terrible it is, and the implied self-hatred of Hynkel not trusting dark-haired people while being one himself, it also portrays it as a matter of convenience for the bigot. Hynkel’s policies against the Jews are often instigated under the advice of Herring that it would make the stormtroopers happy; the policies are temporarily rescinded when Hynkel has to try and get Tomania a loan from an international firm run by a Jewish man. Failure to obtain the loan due to the past atrocities of course causes Hynkel to redouble his hatred. The film also has the character of Schultz, played by Reginald Gardiner. A high-ranking Tomanian official, Schultz’s life had been saved by the barber during WWI, and when he encounters the barber again in the ghetto, he is surprised to find out that his old friend is actually Jewish. He tells his men to leave the barber and his friends alone, and gradually he comes to realize that if it’s wrong to persecute a man who saved his life simply because he’s Jewish, it’s wrong to persecute anybody simply because of what ethnicity they are.

That change in Schultz’s views reflects a basic assertion that Chaplin reiterates over and over again in the final speech in the film, as the barber speaks in front of a crowd of thousands and Chaplin essentially addresses the audience directly. Chaplin is appalled by war and hatred and atrocities, but what comes through in his plea is the same basic optimism that is shown in his comedic characters. Chaplin believes that most people are basically good and loving and want to help each other; that exceptions are self-made abominations against nature. It’s a powerful speech, and really the only way to properly end the film.

The Great Dictator is not an easy film to watch at times, and it’s arguably more difficult to review. It’s funny, but it’s sometimes hard to laugh at. Given what we now know, it’s perhaps even harder. It winds up walking that tightrope between importance and enjoyability, and it’s a situation where it’s almost impossible to keep the balance. Nevertheless, it’s a film that is definitely worth checking out.

4 Responses to The Great Dictator