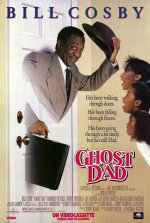 Sometimes your first impressions, no matter vague and ill-formed, are correct. I’ve actually watched Ghost Dad before, but it was when it was new to video and I was fairly young, not quite a teenager yet. I don’t remember much — though I did recall a few scenes — but I remembered not being particularly impressed by it. But I decided to give it another chance as an adult. Sure, the overall rating it’s received on IMDb was more-or-less in line with my childhood impression, but Bill Cosby can be a funny guy, and I thought maybe having some years on me might give me a better appreciation for some of the more nuanced jokes.

Turns out, there aren’t any of those.

Cosby plays Elliot Hopper, a widower with three children. Amanda (Brooke Fontaine) is the youngest and is a generically cute kid. Danny (Salim Grant) is in grade school (or possibly early junior high, I’m not sure), and is obsessed with magic tricks, which he practices with his friend Stuart (Omar Gooding); Stuart is a wannabe yuppie, and is prone to bragging, and is just marginally more interesting than the Hopper children, which is to say, not much. And Diane (Kimberly Russell), the oldest of the Hopper kids, is stressed and bitter over having to take responsibility for her younger siblings. See, Elliot is something of an absentee father; he works long hours at his job, despite his boss (Barry Corbin) being rather unappreciative. He is gone from home so often that his oldest daughter correctly expects him to forget her birthday, and his youngest listens to a tape-recording of him reading her a bedtime story every night. 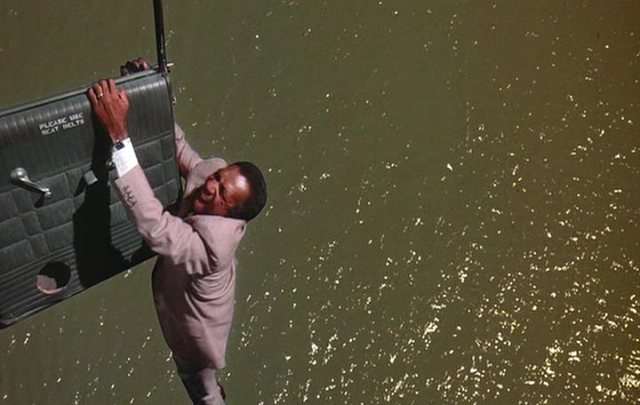 He doesn’t spend much time just hanging around.

Elliot justifies his absence with the benefits an upcoming promotion will be giving him, including ironically, life insurance. Fate intervenes in the form of a Satanist cab driver (Raynor Scheine), whose wild driving sends the cab off a bridge. When Elliot escapes from the river, he finds that he is now a disembodied spirit, and has to break the news to his children.

The film uses his ghostly nature for all sorts of wild antics, from struggling to find the floor instead of falling through, to haunting Diane’s prospective boyfriend through the telephone. It calls on Cosby to do all sorts of Robin -Williams-esque wild takes… but that has never been Cosby’s strongest suit in a comedy. He can do a take, but it’s not the constant factor that it is in this film, and the film doesn’t play much to his strengths of more subtle verbal irony. We see Cosby shouting, we see him pantomiming, we see him distorted in various ways… but we don’t see him doing what he does best. The closest we get to his stand-up comedy style is in an argument with Sir Edith Moser (Ian Bannen), an occultist, and even that’s just about whether Edith is a girl’s name or not. The rest is just playing on mostly-physical gags based on him being a ghost. It doesn’t help that the film plays fast and loose with its own rules for ghosts. It’s established early on that as a ghost, he can only communicate with the living through telepathy, but somehow this works over telephones and intercom systems as well. Plus, the special effects are often hokey even by 1990’s standards, and a lot of the jokes that are used were fairly trite even at that time.

But perhaps what hurts the film the most are the flat characterizations of virtually everybody. None of the characters are well-written. I haven’t even mentioned Elliot’s girlfriend Joan (Denise Nicholas) until now because she’s as superfluous as the kids in Danny’s classroom. Sir Edith may as well be named “eccentric British guy”, and the other characters are all just roles with empty personae. Diane in particular suffers from unbelievable writing and a generally poor performance from Kimberly Russell. It’s not all her fault — I’d put the bulk of the blame on writers Brent Maddock, S.S. Wilson, and Chris Reese — but her character would seem more in place in Saved by the Bell than in a role that should, ostensibly, have a bit of sadness in it to round it out. I’m not expecting a deep portrayal of grief in a comedy, but it seems to me that when your only parent dies, it should involve just a bit more than irritation at how it disrupts your social life.

But really, that’s a problem with the whole tone of the movie. It’s a fairly tragic premise, played for laughs, which isn’t necessarily a bad thing, but it doesn’t necessarily work for a family comedy. There’s a subtle wrongness to it every step of the way, which just gets more pronounced as the film veers towards a happy ending. But it’s OK for a comedy to lack emotional depth if it has a strong comedic backbone. But Ghost Dad does not. Only Cosby gets more than one joke, and most of those jokes don’t seem to have been written with the knowledge that it would be Bill Cosby performing them. It never quite feels right, and very, very little of it is worth a smile, let alone a laugh.

The film was directed by Sidney Poitier, who also directed the great Richard Pryor / Gene Wilder film Stir Crazy. Between Poitier and Cosby, I would have expected a much better film in any number of ways. But the whole thing leaves me feeling as flat as most of its characterizations.