Mary Shelley published Frankenstein in 1818. The mad scientist and his monster have become icons, used and referenced in literature and film and television ever since. And in the case of film, that goes back nearly all the way to the birth of the medium, with a 1910 short silent film produced by the Edison Manufacturing Company. Like a lot of things with Thomas Edison’s name on it, Edison had no direct hand in the film, though he may have acted as producer, and credits were not given to any of the crew. Further, the film itself was long considered lost. Fortunately, however, The Edison Kinetogram, a film catalog, was discovered in the 1960s, which reminded people of the missing film, as well as informing who performed the roles. The film itself was rediscovered in the 1970s. It’s not in the best condition, visually, but it’s still possible to make out what’s happening, and even a suboptimal copy is better than it remaining lost. After all, this is the first appearance of Frankenstein’s monster on the screen. 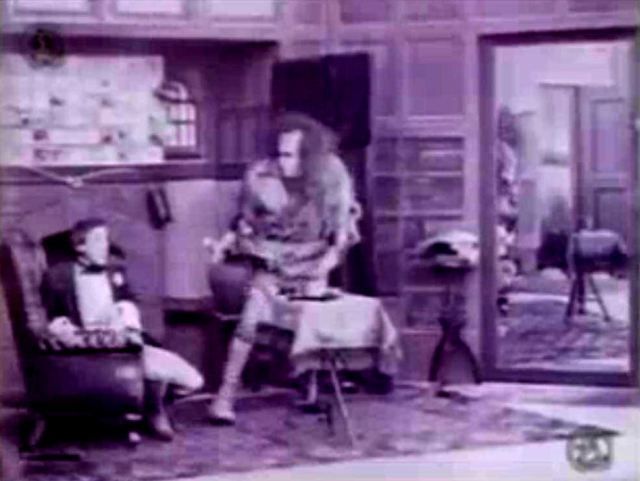 If ever there were a short film in need of restoration…
(I’ve enhanced the contrast here to make it easier to see, but there are limits to what I can do.)

I’d love to see what experienced film restorers such as Criterion or Kino could do with this, as what’s visible looks pretty good. The short was directed by J. Searle Dawley, and even though the medium was in its infancy, he’s already showing some deft skill with directing. It’s presented in color-tinted monochrome, and has something of a three-act play structure to it. Sets are visually interesting, and the shots are situated to give a good view of the action. There’s even a surprising level of special effects in play, with the creation of the monster being shown by burning a facsimile and running the film in reverse. There’s also a scene that features the monster vanishing, while its reflection remains. Film barely even existed in 1910, and here Dawley is already experimenting with it. My only real complaint with the directing is that we didn’t get a close-up of any of the characters, which is a real shame in the case of the monster, as it’s a bit different from the versions seen after Boris Karloff set the standard.

The story takes some distinct liberties with the source material, such as having the creature’s nature be determined by Frankenstein’s subconscious, and not involving the assemblage of body parts, but it works well for the sixteen-minute format. Dr. Frankenstein is played by Augustus Phillips, and his fiancee Elizabeth is played by Mary Fuller. Both put on a decent pantomime. But the star, of course, is the monster, played by Charles Ogle. Disheveled and unkempt, he looks deranged, and moves like a large beast. There isn’t time enough in the film, nor enough depth (nor, at this stage, enough visual clarity) for a modern audience to be frightened by the monster, but it’s still possible to see how the characters would be.

Frankenstein may have suffered some serious visual decay from its long absence, but it’s still a fun little horror short. And at a mere 16 minutes in length, it’s easy enough for people to check out if they’re curious. It’s certainly worth doing so for people who are classic film buffs or horror buffs, just to see some of the roots of the genre. As a public-domain film, it’s available in the Internet Archive, so I would recommend taking a look if it piques your interest.