It’s time. Time for me at last to finish off the three-pack of films I started on back in April. Time for the quarterly installments of that three-pack to crossover with the Halloween season. It’s Worrell time.

Yes, it’s time for the fourth installment in the Ernest P. Worrell series, starring Jim Varney (and the third watched and reviewed here, as the second film is a Christmas movie). 1991’s Ernest Scared Stupid, directed as always by John R. Cherry III. This time the film eschews the relative level of realism (so to speak) of Ernest Goes to Camp in favor of some fantasy fun, set on Halloween. Hey, I never said my Halloween Haunters all had to be scary, or serious, or even smart. 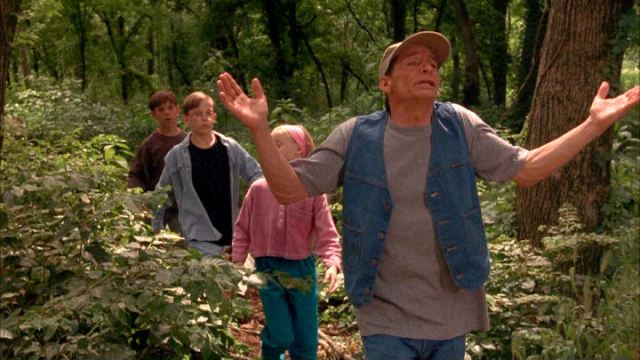 Which is good, as those words are seldom applied to Ernest movies.

The film sets its premise out fairly quickly, with grade school student Elizabeth (Shay Astar) giving a report on some of the local folklore. The tale is shown in flashback. A hundred years ago, an evil troll by the name of Trantor terrorized the countryside until he was caught by the locals, and imprisoned under an oak tree by the local reverend. The troll uttered a prophecy that he would one day be freed by the descendant of that reverend, and a curse that each generation that man’s descendants would become progressively dumber. The reverend’s family name, as even the protagonist could guess, is Worrell. When building a tree house for Elizabeth and her friends Kenny (Austin Nagler) and Joey (Alec Klapper), Ernest frees the troll, and Trantor resumes his reign of terror, abducting children and turning them into wooden dolls, the power source for his magic. Ernest has until sunrise following Halloween night to stop him or an army of trolls will ravage the world.

As is normal for monster movies, nobody in authority believes in the monster. And as is normal in Ernest series, nobody in authority has any respect for Ernest, and even if everybody is smarter than Ernest, they’re all just a tad on the dim side. The smartest is Kenny’s father Cliff (Daniel Butler), but he’s the police chief and thoroughly grounded in reality. So it’s up to Ernest and Kenny to do the bulk of the heroics. They’re helped out by Eartha Kitt as “Old Lady” Hackmore, a woman reputed to be something of a witch by the local children. Kitt is a bit of a higher-caliber actress than is usual for these films, but she’s clearly having a grand old time hamming it up here, and her performance adds considerably to the enjoyment of the film. 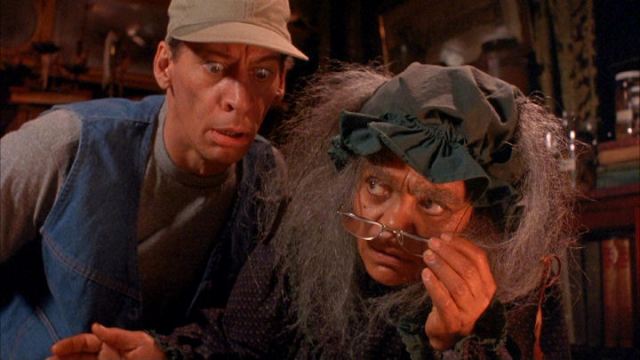 The Shakespearean-trained actor and the Broadway thespian.

John Cadenhead and Bill Byrge also make appearances as a pair of conniving salesmen who sell Ernest all sorts of “anti-troll” equipment they just happen to have in their store. They’re entertaining enough as plot devices and fodder for Ernest’s antics, and unlike earlier entries in the series, Ernest Scared Stupid does not devote unnecessary time to them.

The kids’ performances are a bit uneven. The two main children, Shay Astar and Austin Nagler are fairly natural in their acting. Most other kids in the movie come across just a little stiff, and the girl in the flashback was obviously laughing while pretending to be scared.

Jonas Moscartolo provides the voice and body for Trantor, but of course most of the troll is prosthetics. Moscartolo does his part well, lumbering along in classic fairy-tale monster tradition. And the special effects department did a great job with Trantor, as the troll looks convincingly real throughout the film. Sadly, it seems that may have been the limit of their budget, as even other trolls don’t look quite as real, and the special effects for magic are very hokey.

Most of the jokes work pretty well. There’s a lot of silliness involved, of course, but while the main character is stupid, the humor itself seldom is. Varney’s timing is good, and even his multiple-personality act is actually pretty funny. As for the plot… it holds up fairly well until the very end, where the climax falls flat for me. Silly is the name of the game in Ernest movies of course, but the degree of it in the climax felt a little bit jarring.

Even so, Ernest Scared Stupid was mostly a fun film to watch. It’s not the greatest comedy, it’s not even the greatest in the series; that honor still goes to Ernest Goes to Camp. But it’s good for some laughs, and Varney and Kitt are entertaining. Fans of classic and vintage “kitschy” horror will also get a kick out of the intro sequence, which features bits from films such as Nosferatu, The Screaming Skull and more. Kids will also get a kick out of the film, as most of the humor is thoroughly on their level, though younger ones may find Trantor too scary.