Halloween specials. In some ways, they felt like a thing of the past to me for a while. Maybe it’s just nostalgia speaking, but I remember there being a lot of them that aired in my youth. It’s the Great Pumpkin, Charlie Brown, of course, but also Garfield’s Halloween Adventure, Disney’s Halloween Treat, DTV Monster Hits and others that have sadly faded from memory. I’m sure Halloween is Grinch Night is in there as well, but I don’t actually remember seeing it — I hope to catch it eventually. But during the later part of the 90s and on into the 2000s, it seemed like Halloween specials dropped off. Sure, sitcoms would still devote episodes to it, but it seemed like as far as actual specials were concerned, the networks lost interest. No new ones created, that I recall, and the only one that was consistently re-aired was It’s the Great Pumpkin, Charlie Brown.

So even though I didn’t manage to catch them initially, I was glad when Dreamworks put out a couple TV specials based on their animated films. I may have felt that the Shrek film franchise had started to wear thin, but it just doesn’t feel right to not have Halloween specials on TV in October for kids (and kids at heart) to watch, and here Dreamworks was delivering. I have yet to see a 2012 air date announced anywhere for 2010’s Scared Shrekless, but I had an opportunity to view it recently, so in the hope that it will be relevant, here is my review. 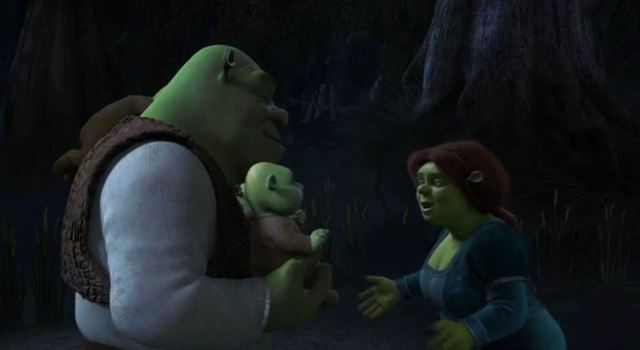 I’ll just take it as a given that you’re familiar with the characters, OK?

In this half-hour special, Shrek and his friends are celebrating Halloween, and Shrek decides to prove his claim that “Ogres are the kings of Halloween” by having his friends regale each other with scary stories while staying in Lord Farquaad’s abandoned castle. Whoever lasts the night without running off will be the “king of Halloween”. This framing device forms the basis for three parodies of classic horror films — Shrekified, of course. There’s “The Bride of Gingy”, “Boots Motel” (a Psycho homage), and “The Shreksorcist”. Each is told by the character in the title, except the second one which is told through Puss in Boots and Donkey interrupting each other.

As homages, they’re pretty recognizable, and the stories are serviceable for kiddie fare, but obviously nothing groundbreaking. The second one is rather incoherent, and though of course that’s the joke, it’s not a particularly good joke. The back-and-forth story-changing between Donkey and Puss is more irritating than amusing. 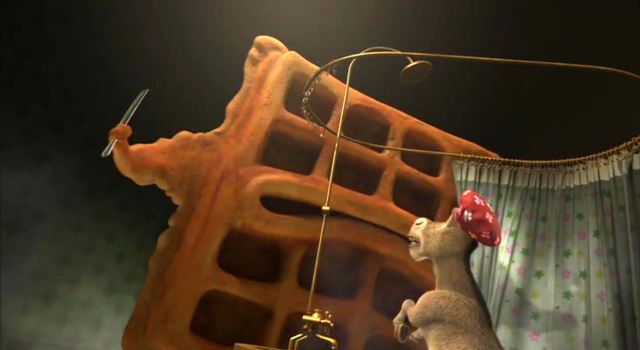 Unfortunately, I can’t say I enjoyed the stories much… the jokes just fell flat with me. I don’t think it’s a case of “Shrek burnout”, though I suppose it could be after seeing three of the films (I haven’t seen the fourth or the Puss in Boots spinoff as of this writing). It’s more that the original Shrek was, while aimed at children, still very appealing to adults due to a robust sense of humor. The jokes in Scared Shrekless are primarily of the just-for-kids variety, being just random goofiness or the occasional vomit joke. And that’s fine, really, since children are the target market — but any adults watching with them are likely to be glad when the half hour is over. Horror film fans may appreciate pointing out the homages to the films, though, and they do have some scenes that, while not exactly frightening, do seem like they would be frightful to the characters.

On a technical level, there’s not a lot to say. Most of the character models and sets are recycled and adapted from the films (this special was made after the third movie, so there’s ample selection to draw from). The few new bits are well done, though. Most of the voice actors returned for the special — Mike Myers, Cameron Diaz, and Antonio Banderas are back as Shrek, Fiona, and Puss, and Cody Cameron and Conrad Vernon are back as Pinocchio and Gingy. You know what you’re getting with all of them in their roles. Eddie Murphy, however, did not supply the voice of Donkey this time around. Whatever the reason for his absence, he is replaced in the role by Dean Edwards, who is close enough that I didn’t notice the difference (granted, it’s been a little while since I’ve seen the films.) Kristen Schaal voices the only real new character for the special, the Bride of Gingy, and also does a good job. The short was directed by Gary Trousdale and Raman Hui; considering Trousdale’s resume includes Beauty and the Beast, I would have expected something more magnificent out of him, but the short is still good on a visual and audio level, just not great. 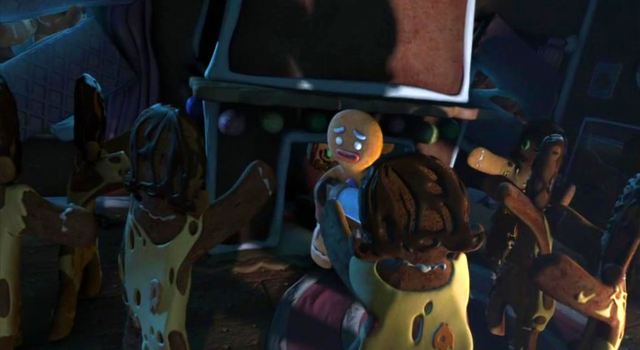 Even though I’m not particularly enthused with this special myself, I still hope that it has regular Halloween airings. Kids should have Halloween specials to watch, and kids will have fun watching this. Parents, older siblings and babysitters, however, will probably have to exercise some patience, and if you aren’t watching it with a kid (or for a blog review!) there isn’t much reason to watch.