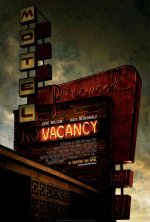 Vacancy, released in 2007, is the English-language debut of Hungarian-American director Nimród Antal. Though it has an estimated budget of $19 million dollars — comparable to either of Rob Zombie’s Halloween remakes — it has a very “independent horror film” feel to it due to a purposefully-limited setting and a very small cast. Luke Wilson and Kate Beckinsale star as David and Amy Fox, a bickering couple whose car breaks down when they take a shortcut off the interstate. Stranded for the night, they check into a roadside motel run by a weedy man named Mason (Frank Whaley). The motel is rundown, the water is discolored, and their room could use some pest control. Trying to wind down after a hard day, David pops a video into the VCR — the motel is nowhere near up-to-date enough for a DVD player — and sees what looks like an amateur horror film, of the slasher variety. After Amy’s objection, he tries another video, and finds something similar. Then he realizes the room shown in the movies is the same… and is the same as their motel room. David and Amy realize that they are watching snuff films — films of people actually being murdered — and that they are in danger.

No wonder this place had such a low rating on Trivago!

If this film has a virtue, it’s that it approaches things reasonably intelligently. The threat isn’t supernatural, but is still given an air of being overwhelming due to having strength in numbers — there are at least three killers shown in the snuff films — and due to having control of the environment. The question of “why don’t they just leave” is handled easily by the dangers of exiting their room and the fact that the killers have the means to disable any cars on the premises. The usual issue of why nobody ever has a cellphone in modern horror movies is also addressed, as the motel is located in a cell phone dead zone, rather logically as it’s surrounded by a wooded area.

Perhaps more importantly, David and Amy are portrayed intelligently. They recognize the danger early, and start taking steps to deal with it. Obviously, as this is a horror movie, they have more problems than successes, but there’s no sense of the usual “idiot protagonist” syndrome that infests slasher movies. It also doesn’t tend to produce as many jump scares as are common in the genre.

That said, though the film draws on the fears of enclosed and trapped spaces, it’s not a particularly scary film. Perhaps it’s because it reveals the threat so quickly, or because the initial revelation — pounding on the door and walls — is more annoying than frightening, even to the characters. Or perhaps it’s because having more competent heroes means it’s more obvious when their failures are caused by bad luck or bad timing rather than a superior villain — certainly the killers here don’t seem to be more on the ball than the heroes, and that tends to be necessary in a horror film especially when the heroes are shown to be competent. Suspense and fear often depend on the feeling that the hero is outmatched; here, it often feels as though David and Amy are just one lucky break away from getting the drop on their tormenters. It’s not quite enough to turn it into an action movie… but it’s enough to make one think of the possibility. In a way, the film is almost too grounded in reality — there’s a realistic perspective that a properly-alerted intelligent couple stand a reasonable chance against the danger. Had the villains been more intelligent themselves, it might have been possible to restore that sense of suspense while maintaining the sense that this is something that could actually happen.

Somehow this disclaimer isn’t as reassuring as it usually is.

Vacancy may be a bit light on frights, but it’s still an interesting and well-acted twist on the horror genre. While general audiences can probably give it a miss, horror fans will probably enjoy checking it out.