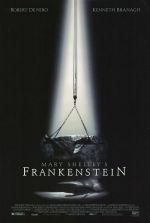 Mary Shelley first published the story of Frankenstein in 1818. The story of a scientist tormented by the life he had created easily captured the imagination of the public. In 1910, Thomas Edison created the first film inspired by the characters, which I reviewed earlier this month. Universal Studios released their version in 1930, and Boris Karloff is still the iconic version of the monster. Since then, dozens of films have been released that are either direct adaptations of the novel, or inspired by Universal’s film, or just use the characters in some form or other. There is no shortage of films with which to compare the novel to, but for this edition of “Version vs. Version”, I decided to go with the 1994 film, directed by and starring Kenneth Branagh. Marketed as Mary Shelley’s Frankenstein, it purports to be closer to the original novel than other films.

In some ways, this is accurate. In other ways, it really, really isn’t.

For example, the novel does not include a nude wrestling sequence.

The novel, some people might be surprised to find on first reading, has a framing story in which Victor Frankenstein is found in the Arctic by Captain Robert Walton, mounting an expedition to the pole. Frankenstein explains how he came to be there, first explaining the creation of his monster and the events which have led him to chase his creation into the north. After Walton witnesses the final outcome of the chase, he recognizes in himself the same hubris that drove Frankenstein, and resolves to return home instead of further endangering the lives of his crew. Branagh’s film preserves this framing story, but naturally abridges it — the novel is quite verbose. Unfortunately, it perhaps truncates things too much, as we essentially see Walton (here played by Aidan Quinn) flip-flop on his decision with little outward indication. The novel is filled with internal monologues from various characters, from Walton, to Frankenstein, to the monster itself, and a great deal of this doesn’t translate well to the screen, where we see only the external outcome of these decisions. While a lot of it can be inferred from the outside factors, it’s helped greatly if one has read the novel — as it is, the film often winds up feeling like it’s not taken from the novel itself, but from the Cliff’s Notes version, for all that it’s two hours long.

Most of which is spent on close-ups of people with funny expressions.

While the movie excises most of the internal character development that is necessary to understand the motivations of the characters, it also expands and sometimes alters other characters and their development. The death of Frankenstein’s mother, part of the original novel, is here more explicitly linked to his desire to create life — which in the novel was simply inspired by scientific curiosity (more in keeping with other film portrayals). Frankenstein’s professors at school, minor bit parts in the novel, are expanded slightly — particularly Professor Waldman (John Cleese). Waldman was supportive of Frankenstein’s studies in the novel, but here is given a tragic past himself, and is essentially the forebear of Frankenstein in that he, too, once attempted to create life. (As with other movies, the creation of life is tied to electricity here; the novel is purposefully silent on the method.) Henry Clerval (Tom Hulce) has one of the more minor and logical changes, going from a childhood friend of Frankenstein and the son of a merchant, to being one of Frankenstein’s fellow medical students. His role, however, remains much the same, as the supportive friend who nurses Frankenstein back to health after his experiment goes awry. And the film also keeps the character of Elizabeth, Frankenstein’s fiancee — and is wise enough to keep Victor a young character instead of the aged scientist so often seen. There is one odd change there that I’m a bit of a loss to explain, though. In the novel, Elizabeth was the ward of Frankenstein’s parents, sometimes referred to as Victor’s cousin as a term of affection. She’s still their adopted ward in the movie, but here Victor and Elizabeth call each other brother and sister. While the actual relationship is technically the same, it’s significantly weirder to hear two lovers refer to each other as siblings. It would have been wiser, from a modern standpoint, to just have her be their ward (or remove that aspect altogether) and drop all familial terminology.

Helena Bonham Carter is weird enough as it is.

The film holds truer to the novel than other adaptations in some ways, but it diverges enough that it can’t be taken as a straight adaptation even so. Some of the changes are minor, but still result in noticeable alterations; in fact, one change regarding the actions of Justine (Trevyn McDowell) required another minor change in order to avoid creating a significant plot hole. Other changes are more major, such as a sequence in the third act which is made up out of whole cloth. It’s enough that it doesn’t really earn the moniker of Mary Shelley’s Frankenstein more than other adaptations. Plus, it even borrows some elements from those earlier films rather than the novel, such as the quest for a desirable brain. Still, these changes could easily be forgiven but for one thing: the film just isn’t very good. Part of this is because the film excises the internal monologues, doesn’t replace them with dialogue, and yet has lines and interactions that appear to depend on said internal decisions. If somebody has read the book, they can figure out what’s going on, but otherwise I suspect the characterizations in this film are going to look rather choppy and disjointed.

A Frankenstein film that looks poorly stitched together.
Irony as she is writ.

The other major problem is that nearly everything is overacted. A lot of times, this would be the fault of one or two actors in a film. In this case, because there are few exceptions among the actors, and even the musical score seems to be overacted (so to speak), I have to place the blame on director Kenneth Branagh. One can only presume that this extremely overdramatic presentation was a deliberate choice on his part, and that he was requesting it of all his actors. It’s easy to illustrate the problem here, even for those readers who haven’t seen the film. Everybody, even if they’ve never seen any Frankenstein movie, is familiar with the classic “It’s Alive!” scene, with its requisite shouting. If you imagine a film in which every scene and nearly every line is delivered in that same manner, you will wind up with something rather close to this film. Everybody is delivering lines that are written for high melodrama, and everybody is always either shouting or weeping or both, none more so than Branagh himself in the lead role as Victor Frankenstein. Of the actors playing major characters, the only ones to play a somewhat restrained role are John Cleese as Prof. Waldman, and Robert De Niro as the creature… and even De Niro succumbs to excess hamminess a few times during the picture. I enjoy a bit of hammy acting in certain productions, but in this film, it’s all over, and it’s the ham of people who have the volume turned up, not the ham of people who are loving what they’re doing.

When your subtlest actors are this guy and John Cleese, you’ve got problems.

When it comes to recommending which version to check out, I find myself in a bit of a conundrum. The book is good — quite good, really. But for all that it’s not very long, it does have a long-winded style of writing, and it takes a while to get to the interesting bits. I’m not sure most modern readers will have the patience for it. Still, I think people would enjoy the book much more than they would enjoy this film. The acting — presumably as a consequence of the directing — does not fit the film, and is too over-dramatic. And the film is more likely to make sense if one has read the book, which is not a condition that should be true of any good film. I regret I have yet to see the 1931 Universal film, so I cannot evaluate it — but given its longevity I strongly suspect it’s more enjoyable than this.

Version Verdict: Of the two, read the book. Otherwise, check out Gene Wilder in Young Frankenstein. It’s really not any less respectful than this film, and you’ll enjoy yourself a lot more.