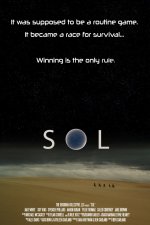 Making its debut in film festivals in April 2012, Sol is an independent science fiction film written and directed by Benjamin Carland; it is the first feature film from the director. It’s an ambitious story, about a group of academy students participating in a competition who wind up stranded on an alien planet. Independent science fiction films can essentially go one of three ways. In the best case, they are so well done that the viewer never realizes that they were done without the backing of a a major studio; it simply doesn’t matter. In what is probably the most frequent case, the film is well done, but the lack of a large budget results in some areas which could obviously be improved, generally in the special effects. And then there are those films where the lack of a significant special effects budget are a minor issue compared to everything else wrong with the movie.

Sol, sadly, falls into that last situation. While it has some potential in its concept, it falls short in nearly every other respect.

The premise of Sol is that every year the various Academies of Earth’s extra-planetary colonies each send a team of students to compete in the “Sol Invictus” tournament. The students are sent through a “slip-gate” to a distant world, where they have to survive and fend for themselves with the supplies they’ve brought. Each team has a captain, an engineer, scouts, a recorder to keep logs of the events, a medic, and an astronomer. The astronomer is arguably the most important, as his job is the key to winning the tournament: Find Sol — the Earth’s sun — in the night sky. When they find it, they are awarded a “Hyperion coin” and can return home. Only this time, something goes wrong with the slip-gate. Most of the students never arrive, and those who do presume them dead. Only a handful remain, and the students from different academies are forced to band together to survive. They have no means of communicating with the Academies that sent them until they find Sol — the electronic telescope is then supposed to trigger a signal — so they have to act as a single team until they can achieve that goal.

The problems with this film mostly revolve around the characters. Specifically, there’s not much variety in the personalities here. There’s egocentric jerk, psychotic jerk, cheating jerk, helpless jerk, whiny jerk, and passive-aggressive jerk. Their motivations and back-stories are mostly ciphers, and could stand to be fleshed out a lot more in order to make the dramatic tension more believable. As it is, sometimes everybody is being cooperative and helpful, and sometimes they’re busy back-stabbing each other, and there’s little rhyme or reason or foreshadowing as to what it’s going to be. Kids sometimes make stupid decisions in real life, and it only makes sense that they would do so in a movie… but some of the decisions don’t make sense on any level. For instance, at one point the team leader, who is on night watch, sees a creature haul away their food supply. Does he try to stop it? Yell to awaken his teammates? Tell them about it afterward? No. He blames the theft on another teammate and exiles him, with minimal strife between the characters beforehand. Yes, that character had been upset over the loss of food and blamed the team leader, but it all could have been avoided had the leader done anything at all during the theft, like somebody on watch is supposed to do. It can’t even be justified as a Machiavellian scheme, as this character was the one who suggested everybody band together and insisted they needed the help of the psychotic jerk despite his actions endangering everyone. When called on it, he just says he “didn’t know what to do” (he’s the whiny jerk, incidentally.) Another character refuses to build a fire at one point, despite needing it for heat and light and fending off animals (it takes the team a disturbingly long time to figure out a fire will do that, incidentally); he feels it’s beneath him, as “that’s something homeless people do”.

I could be mistaken, but I’m pretty sure this is not a 4-bedroom ranch house.

The characters and dialogue aren’t the only problems, just the most prominent ones. The acting is a bit rough, as might be expected when most of the actors don’t have any prior film experience. Still, with the dialogue they’re given, I’m inclined to give them the benefit of the doubt. Camera work is adequate in most places, but does have some definite weaknesses. Night scenes were apparently actually filmed at night, and without a sufficient light source to illuminate the scenes; they are often too dark to make anything out clearly. Some other segments are filmed through the “recorder’s” camera, and the shakiness of the hand-held footage plus the graphics (so the audience knows it’s the character’s camera) are distracting.

Special effects in the film are mostly non-existent, other than showing the slip-gate and adding some moons to the night sky. This wouldn’t necessarily be a problem, but a significant part of the plot involves attacks by monsters the kids call “hunters”. These are apparently dangerous and frightening, and are never shown to the audience. Sometimes not showing the monster is scarier, but this isn’t one of those cases. The audience seldom even sees the effect that the monsters have. Were it not for the occasional growl heard, it would be possible to believe that the “hunters” were all in the kids’ heads.

As a concept, Sol‘s premise has some value. But its execution is poor at best, and I don’t think it can be blamed or excused on its indie budget. I wish Mr. Carland nothing but success in the future, but it’s going to have to come with some extra effort on the writing side of things, as Sol just falls flat.