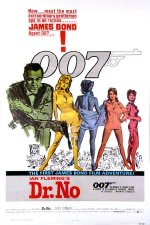 After starting off with a non-canonical entry, it’s finally time to start with the official entries in the James Bond series, with Dr. No. The film didn’t just start off the James Bond series, it started an entire genre of spy films and spy spoofs… some series, such as Matt Helm or Harry Palmer went on for a few entries themselves though none were anywhere near as successful or notable as James Bond (in fact, if we want to look for a movie series that has more entries, we have to include shorts, and even then it’s pretty much only Looney Tunes and The Three Stooges.)

And not these three stooges.

The first film in the series doesn’t start off feeling like a typical spy film; rather, it initially feels more like a mystery than an espionage escapade. Bond is sent to Jamaica to investigate the disappearance of an information agent, not knowing what he’s being sent into, and the first half of the film is dedicated to him uncovering what’s going on in the area. He eventually tracks down the source of the trouble to an island owned by the enigmatic Dr. No — I don’t think it’s a spoiler to say that, given the title — which provides a bit of a tonal shift there from simple investigation to the type of derring-do that pop culture has built Bond’s reputation around. Fortunately, although the investigation phase isn’t as exciting as one might hope, it’s also not boring. Bond’s approach to investigation appears to be “poke it with a stick and see what happens”, and he stirs up just enough trouble to keep things interesting. In a way, the first half of the film feels rather like an homage to film noir; this is perhaps appropriate, as Bond is based on a similar type of pulp fiction.

The film similarly makes use of femme fatales. But you knew that.

Sean Connery as Bond is always cool and collected, smooth without coming across as being too slick. It’s easy to see how he became the archetype for the master spy. There’s a strong sense that even when he’s not in control of a situation, he’s constantly on the lookout for a way to become so. He’s surrounded with a cast of characters to play off of, who both add their own qualities to the film and give Bond a chance to look good. Zena Marshall plays Miss Taro, the femme fatale pictured above; while an Asian femme fatale runs the risk of running into the “Dragon Lady” cliche, that’s mostly avoided here, as Taro is casual and friendly in behavior. Jack Lord plays Felix Leiter, Bond’s American counterpart helping him on the case as the U.S. has a vested interest in finding out what is happening in the area. (This, incidentally, makes the Climax! version of Casino Royale even more amusing — it made Bond an American and Leiter a Brit, reversing the nationalities.) Leiter and Bond are backed up by Quarrel (John Kitzmiller), a simple fisherman in their employ. Quarrel provides some of the comic relief, being a bit superstitious and wary, but also manages to hold his own in a few of the fights. All of these are solid performances that help to round out the film and keep it, while a James Bond film, from being a one character film. Although Bond is the undisputed star, there’s never a sense that he’s completely going it alone.

Of course, the most notable sidekick in the film is Honey Ryder, played by Ursula Andress with a memorable and oft-imitated entrance. Sadly, while her arrival is iconic, the character herself is a little more uneven. Andress’s acting is reasonable enough with the mannerisms, but her accent was apparently too thick and she is rather obviously dubbed over. Another issue is how the character is written; her backstory and career indicate a strong-willed self-motivated character. Her actions in the film, however, are strictly that of a panicky follower. She’s more of a millstone than a match for Bond; while she doesn’t directly endanger him, she doesn’t do much to help him either, and is there largely to be rescued. There’s nothing wrong with that type of character when it’s called for, but it does jar with the way her character is initially portrayed.

British slang calls an attractive woman a “bird”. This one’s an albatross.

The strength of an action film, especially an espionage film, is often directly proportional to the strength of the portrayal of the villain. This goes double when the movie is named for the villain. Dr. No is played by Joseph Wiseman; discrepancies between the character’s race and Wiseman’s are handwaved by saying he is half-German, which also provides an excuse for his original Chinese superiors to distrust him. Wiseman gives Dr. No a formidable appearance, with an austere and commanding presence that would make him a memorable villain even without the iron claws that have replaced his hands. The writers pull their weight here as well; we learn just enough of Dr. No’s backstory to make him interesting without making him sympathetic, and just enough of his motivations to make him a threat. We get hints of S.P.E.C.T.R.E., the organization behind him, but only hints — leaving the door open for later entries in the series to explore it further. Wiseman gives the impression that Dr. No is a criminal mastermind who isn’t above getting his hands (so to speak) dirty, and the film delivers on these counts. He’s a great villain, and elevates the film considerably. 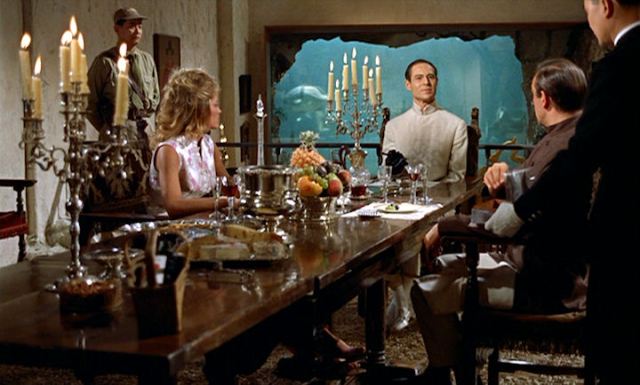 The film isn’t perfect, though. There are some fairly goofy spots in it, such as the scene where Bond is threatened by a “venomous spider” that’s depicted with a tarantula (which are non-venomous and generally fairly docile), or the scenes in which Quarrel and Honey insist there’s a dragon on Dr. No’s island. Still, these instances feel less like serious detriments to the film and more like room for the series to grow. Speaking of room for the series to grow, it’s possible to spot many of the Bond hallmarks already starting to take shape here (even if one’s familiarity is based on pop culture references). The one-liners, the music, the sense of style… it’s all here. Dr. No may take a little while to get going, and may have some weak moments, but it’s a worthy start to the series and a decent film in its own right. It’s definitely worth checking out, and worth watching more than once for fans of the genre.

17 Responses to Chronological Bond: Dr. No