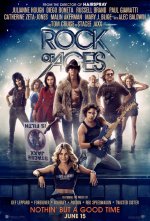 Let it be known: I am something of a metalhead. And not just any old sort of metalhead, but a long-haired metalhead. I grew up in the 80s, and while my musical tastes absolutely include a lot of classic rock — as the term was defined then — there’s a big chunk of metal in my CD collection. Most of it’s a particular kind of metal. 80s metal. Hair metal. You tell me a film includes songs by Poison, Def Leppard, Twisted Sister and Scorpions, and at the very least, I’m ready to listen to the soundtrack.

Rock of Ages, released in 2012, is a film adaptation of a Broadway musical set to the hair metal, arena rock, and glam rock of the 1980s. It’s also set in 1987, and is about the hard rock scene. So I was predisposed to like it. But I have to say the film is more White Lion than Whitesnake. 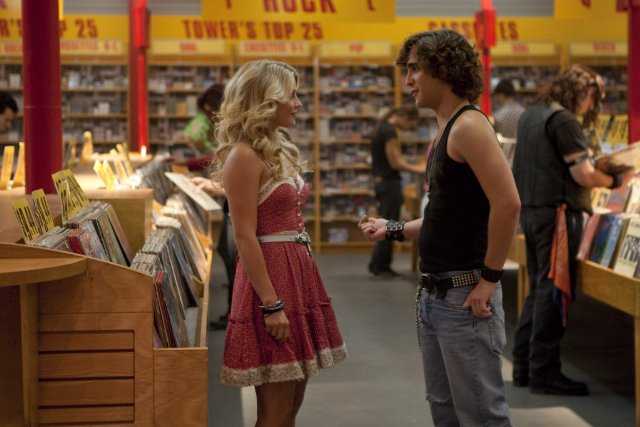 If you don’t get that reference, get off my lawn and into a record store.

Just to resolve any ambiguity for those who aren’t aficionados of albino-animal-themed hair bands, Whitesnake are skillful, talented, and had a bit of an edge to them; Whitesnake rocks. White Lion were capable musicians, and not bad, but if you were to sort all the hair bands in order of wimpiness to awesomeness, you’d find White Lion cheerfully anchoring the left end of the line. Their greatest hits were “Wait (I never had the chance to love you)” and “When the Children Cry”. Rock of Ages includes the music of Whitesnake and bands like them… and turns these songs into something akin to what White Lion would put out. The songs are usually at least vaguely appropriate to the scene they’re in, sometimes with the song standing on its own, and sometimes the songs are mashed together, such as a combination of “Juke Box Hero” and “I Love Rock ‘n’ Roll”. It could work. It should work. But the songs lose their edge in the transition, and I think it’s down to the people doing the singing. The actors in the film perform their own songs, as they absolutely should in a musical. But while they’re all capable singers (sometimes surprisingly so in the cases of the non-professionals), they’re not rock singers. The worst offenders here are the leads, Diego Boneta and Julianne Hough — Hough more than Boneta.

I want to stress that it’s not because Hough is a young woman that her performances lack the necessary “oomph”. My MP3 collection includes the Runaways, and solo works from both Joan Jett and Lita Ford, plus Alannah Myles, Vixen, and Pat Benatar. Women can rock as hard as men, there’s no question of that. It’s just not happening in this film, and it’s because although Hough is a professional singer, she’s not the right kind of singer. Just off the cuff, if you were to pick a singer to perform hair metal songs, glam rock songs, and just general hard rock songs, what genres would you look to in order to find your performers? If you said country and Latin pop, you’re in agreement with director Adam Shankman, because that’s what Hough and Boneta have recorded professionally. The transition doesn’t quite work. They’re on key, their timing is right, but they fall just a bit short of that intangible energy that makes rock rock. Hough’s country background does make her somewhat believable as a “small town country girl” coming to L.A. (though I didn’t buy her as being from Tulsa for a second), but it doesn’t serve her well when singing rock songs; there’s always a pop-country vibe to her singing. Boneta does a little bit better, but he also comes across as being a bit more pop than rock — although this does work well during a hilarious scene lampooning boy bands late in the film.

The best musical performances, ironically, come from the cast members who are more experienced with acting than singing. Catherine Zeta-Jones turns in a passable performance of “Hit Me With Your Best Shot”, and while Alec Baldwin and Russell Brand aren’t going to win any singing competitions, they have a clear genuine enthusiasm that elevates their performances. Where Boneta and Hough sound refined but manufactured, Baldwin and Brand sound crude but authentic. The best of the bunch, however, is Tom Cruise, as rock star Stacee Jaxx. He can actually sing, and he has the necessary enthusiasm — and insanity — to tap into a reasonable facsimile of a hair metal musician. He comes the closest any of these performers come to songs that could find their way into someone’s playlist.

I realize I’ve written around 800 words so far and nary a one about the plot. That’s because if you’re going to watch this movie, you’re watching it for the music — the plot is nothing special. In fact, it suffers a serious case of missed opportunity. It all centers around the Bourbon Room in Los Angeles, a night club that has (in this alternate-reality version of the 80s) launched the careers of many rock bands, including the world-famous Arsenal, led by front-man Stacee Jaxx. Julianne Hough plays a small-town girl who has moved to L.A. in hopes of making it big; she starts working at the Bourbon Room with romantic hopeful Diego Boneta. Baldwin and Brand play the owner of the club and his chief assistant, hoping that an upcoming farewell performance by Arsenal — as Jaxx is starting a solo career — will boost the club’s profits back to where they need to be in order to pay the property taxes on the building. Meanwhile, the wife of the mayor (Zeta-Jones), is hoping to shut down the club in order to reduce the “harmful” influence of metal on the children of Los Angeles. 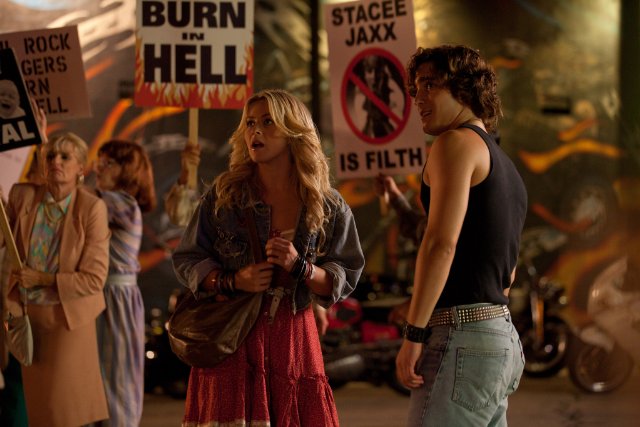 L.A. in the 80s: The nation’s center of morality and innocence.

There are several plot threads, but the only one that really gets more than a two-line treatment is the romance between Hough’s Sherry and Boneta’s Drew. This is a problem in two ways. First, it’s a very tepid and typical youth romance. Even as such things go, it’s not particularly interesting, and is very predictable. Second… even if it were an interesting plot, it’s still probably the least interesting plot in the film. The fight against the moral crusaders is a bit more interesting. The struggle to keep the Bourbon Room afloat is potentially interesting. And Stacee Jaxx, played marvelously by Cruise at his whacked-out best, is far more interesting. The audience spends probably 80% of their time watching Boneta and Hough, but they are the least dynamic characters in the whole thing. All the interesting conflicts are in the B-plots, which are hardly given any time at all to shine. Brand and Baldwin work well as an aging fixture and an addle-pate, hangers on of rock and roll still hoping to hang on. Cruise is either hilarious or electric whenever he’s on screen, and even the short-changed romance with Malin Akerman’s reporter works reasonably well given what little time it has to work with. And Paul Giamatti plays off Baldwin and Cruise magnificently as Jaxx’s weaselly manager.

This could have been a great story. It’s just that the story that’s being told isn’t the right one. I don’t need to see another by-the-numbers teen romance (OK, they’re in their 20s, but it’s a teen romance in structure.) And the moral crusade against the plucky upstart outfit was done to death… in the 80s. Not saying it can’t still be done, but if so, it needs to be done really well. But done well or poorly, it’s still not the most interesting thing here.

There’s enough here to be entertaining, especially with the flashes of humor, which can sometimes be hilarious. And there’s enough here to see the potential greatness in the film… but not enough to actually be great. If the writers really wanted something great here, it’s all too clear what needed to be done. Move the subplots to the forefront. Cut the young couple entirely. Cut the mayor’s wife and her crusade. Show me the redemption of Stacee Jaxx, the rock star lost in his own fame. Show me the Bourbon Club struggling to remain afloat and hoping Jaxx gets his act together in time to save them. Make that the focus of the film, not the backdrop. Dedicate all of the film’s two hours to that story, instead of just a small portion. That’s different. That’s interesting. That’s rock and roll.

As it is? Rock of Ages is glee club.

7 Responses to Rock of Ages