CinemaNow was the first digital service I tried, thanks to a free movie promotion Best Buy was running, and it was one of the first I reviewed. However, at the time that review was written, CinemaNow was not using UltraViolet for the service. They have since joined the UV bandwagon, and retooled their player as a result. Hence I felt it was prudent to review the new version of the player, as it’s almost an entirely separate beast. (This review is of the Windows XP version, but most commentary should be germane to all versions).

Most of the review will consist of how it works in general, and will refer to purchased movies, not rentals. However, rentals should work essentially the same, with the usual caveat that the availability window is 30 days from the start of rental, and the playback window is 2 days from the first play. There’s an option in settings to have the player notify you before the rental expires.

The player has an auto-update feature, just as the older version did — however, it must be noted that the older version’s auto-update will not detect that it needs to update to the new version. You must go to the website and download it. I strongly recommend doing a clean wipe of the old version before installing the new. Although the new version has the option to import downloaded files from the old non-UV version, it did not work properly for me. I found that when I tried to launch the older titles, they would instead load in my default WMV player; if I reset the default to be the new CinemaNow player, they would not play at all (the current version saves in F4V files), even if I re-downloaded them. Only by doing a clean wipe of the software and starting fresh was I able to get the non-UV movies to play in CinemaNow upon download. (Caution: Check the license status of any of these films on CinemaNow’s website before deleting them; I had one for which CinemaNow no longer had the license, and it will no longer allow you to re-download the film in such a case. But if you hang onto the old WMV file you can still drag-and-drop it into Windows Media Player, where it will work just fine.)

Movies are rented or purchased through the website (naturally, CinemaNow.com) and show up promptly in the player. The player (still powered by Rovi underneath) displays the titles in a grid of images based on the movie poster or DVD cover. Both UltraViolet titles and titles from CinemaNow’s previous system are displayed and available; UltraViolet titles have a small UV logo next to their title. Clicking on a movie brings up a side panel showing the movie’s run time, year of release, MPAA rating, your star rating, a brief description, and buttons to download or play the film. All titles in your library are displayed, even ones that CinemaNow does not currently have a license to provide; in those cases, the download and play buttons will be greyed out with a message to the effect that the title is not available. While it’s annoying to see this message (see my extended rant on Roadblocks for the Digital Revolution), I still prefer it to not having the title show up at all, as is often the case in other players. 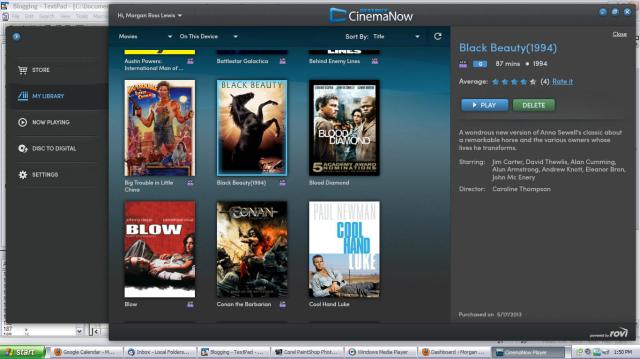 The visual style of the player is also a little odd; I’m used to a maximized window taking up the full screen.

The library pane also provides some filtering and sorting options. You can choose to display only movies or only TV shows, movie purchases, movie rentals, HD movies, and UltraViolet titles. You can also filter by whether you’ve ever watched the title and whether it has currently been downloaded to your computer. And you can sort by purchase date or title (although it considers “The” as sorted under T, in contrast to traditional alphabetizing). What you cannot do, unfortunately, is keep those settings; when you restart the program, it loses track of the filtering and sorting choices you’ve made.

When you click the Play button on a title you haven’t downloaded, it will start streaming the title for playback. Clicking Download will store the file to the directory you’ve specified in settings, and will update the Play button to have a timer on it. This timer reflects the point at which the player estimates you will be able to simultaneously stream and download the film; it does not reflect the time the download will complete. There is, however, a percentage indicator next to the download button will let you know how far it’s progressed. If you’re on a slow connection, I recommend opening up the download folder in windows so you can observe the file size change as this has a faster rate of change than the percentage on most movies. This is important, because the player seems to have trouble with finicky connections (or is finicky itself, it’s hard to be sure from my vantage point). If it loses the connection, it has trouble reestablishing it and needs to be restarted. It also sometimes stops downloading for no apparent reason; pausing the download and resuming will give it the necessary kick in the pants.

The download can be paused if you need to use your bandwidth for other purposes. If you exit the player and restart it, its download state will be the same as when it was closed; i.e., it will resume downloading the file, unless it was paused when you exited. Once the download is complete, the download button changes to a delete button; don’t worry about accidentally clicking it, it includes a confirmation screen.

When you play a movie, it has only a few basic controls: Play/Pause, a position slider, volume control, and full screen. The title of the movie is displayed in the corner of the movie in basic mode. In full screen mode, the title and the controls will fade after a few seconds of inactivity from the mouse. Playback quality is good; the movies in my collection are all standard-definition, and they indeed seemed to be in the quality of a standard DVD. One nice feature of the player is that once you’ve started a film, even if you exit the player, the Play button in the library will change to a Resume button that will restart the film at the point you left off. It will revert to the standard Play button once the movie is completely finished (which, admittedly, means you have to let the player reach the tail end of the credits, but this isn’t too onerous, given the position slider.)

On the whole, while it has a few quirks to be dealt with (particularly in the initial setup if one had the earlier version), I find that the CinemaNow Player is reasonably good UltraViolet movie player. I still haven’t found a system that I think suffices as a replacement for DVDs, but this is largely due to the UltraViolet licensing issues and isn’t a problem limited to CinemaNow. Viewed strictly in comparison to other UltraViolet players, CinemaNow is fairly good.

Fan of movies and other media
View all posts by Morgan R. Lewis →
This entry was posted in Tech Reviews and tagged 4 Stars, Best Buy, CinemaNow, movies, reviews, software, technology. Bookmark the permalink.