Run, Lola, Run — released in its original German as Lola Rennt — is a 1998 film directed by Tom Tykwer. It takes an experimental approach to both storytelling and filmmaking, and while some of the experiments don’t entirely pan out, the resulting film remains both entertaining and novel.

Lola (Franka Potente) is a young woman living with her boyfriend in an apartment in Berlin. One day her moped is stolen, and she is unable to pick up her boyfriend from a business deal. This leads to disaster, as Manni (Moritz Bleibtreu) is a courier for a crime boss… and during the course of his attempt to get home on foot and through the subway, he lost the money bag he was supposed to deliver. His boss is coming to pick it up soon, and unless he can come up with the 100,000 Deutsche marks, he’ll be killed. He calls Lola hoping she has a solution; if he can’t get the money any other way before noon, he’ll rob a local grocery store. Lola has twenty minutes to get the money and get to him… and so starts Lola’s run. 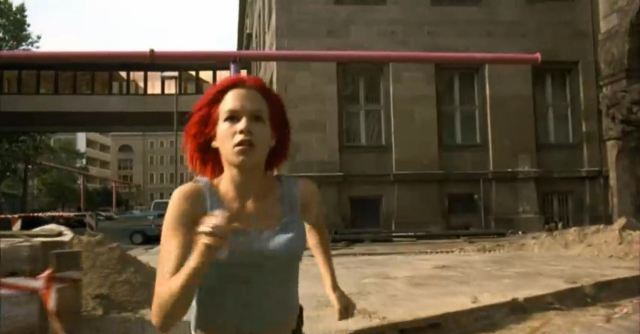 All this effort could have been saved if Manni had tied the bag to his wrist.

Twenty minutes isn’t a lot of time for Lola to act, nor for the film to establish characters. The film is about an hour longer than that, partly due to the usual time dilation that occurs in action films, and partly due to a storytelling trick I won’t spoil if the reader has somehow avoided learning of it. (It’s reasonably common knowledge about the film, and indeed is why I checked the film out, but it’s the sort of thing that changes one’s understanding of the film as one watches if it comes as a surprise.) We still don’t get much exploration of the characters of Manni and Lola — and the only side characters to get more than a few seconds are Lola’s father and his mistress (Herbert Knaup and Nina Petri) — but we do get to see Lola’s determination and Manni’s desperation on full display. We also see how much faith Manni has in Lola — he calls because he genuinely believes that she can come up with an answer, even though he is very pressed for time — and despite their wayward lifestyles, it’s clear that they love each other. Potente obviously has to do the bulk of the acting here, as most scenes involve only her character.

The action sequences, which naturally consist of Lola running for most scenes, are more interesting than one would expect. Tykwer maintains a frenetic pace in his filming, and a techno soundtrack supports the energy of the film. And, of course, there are plenty of obstacles to interfere with Lola’s run.

Tykwer seems to have taken an “anything goes” approach to film making. There are fast-paced run sequences, and moments of slow-motion to emphasize certain scenes (such as Lola throwing the phone into the air). Some of the characters Lola bumps into during her run are then the subjects of fast-paced slideshows showing what happens in their lives after. This is an interesting idea, but it doesn’t mesh completely with the main plot, as there doesn’t seem to be any reason to think that Lola’s actions had anything to do with the outcome; they’re mostly four-second side-stories involving characters who would otherwise be extras. Additionally, there are a few animated sequences, most notably the Vertigo-esque scene of Lola running down her apartment building’s stairs as she begins her run. It is again an interesting idea, but again falls flat; in this case, partly because it’s hard to escape the notion that the sequence would be more interesting in live-action, and partly because the animation is a bit of an eyesore, resembling a grade-schooler’s scrawl.

Live-action Lola is fairly easy on the eyes. Animated Lola, not so much.

Attempts to be experimental are laudable, but my philosophy has always been that experiments are for the cutting room floor unless the result is successful enough to strengthen the film. In the case of the animated sequences, they detract. Nevertheless, the film as a whole is exciting and interesting enough to outweigh these concerns. Run, Lola, Run may be a bit weird, like it’s protagonist, but it’s fun and worth watching.