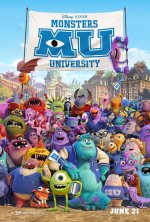 Pixar has been getting some mild flack lately for producing a lot of sequels to their films. I’ve seen some people calling for them to get back to doing more original ideas, like they did with their first three films, Toy Story, A Bug’s Life, and Toy Story 2. Er. Of course, Pixar themselves have recently announced an intention to do just that, increasing their original productions while still producing the sequels and prequels.

For my part, when I first saw the trailers for Monsters University, I didn’t have that reaction. While I’ve still got a fair amount of the Pixar catalog to cross off, Monsters, Inc. was perhaps my favorite Pixar film. And while that ended in such a way that I can’t really picture what a sequel to it might entail, Pixar solved that issue neatly by avoiding it, and making a film showing Sully and Mike’s college days. I was in favor of this from the beginning; it was a chance to see two of my favorite Pixar characters interact again, and besides, it simply looked like fun. A monster company was a fun idea, and a monster university looked like it would be similarly fun. And Monsters University does not disappoint.

Mike and Sully (Billy Crystal and John Goodman reprising their respective roles) don’t start off the best of friends in this film. They’re rivals in the University’s scare program. Mike has the brains, Sully has the instincts and the family heritage. They take repeated potshots at each other, until their antics earn the negative attention of Dean Hardscrabble (voiced by Helen Mirren)… who promptly kicks them out of the program. A lifetime dream for both of them is crushed until Mike makes a wager with the Dean. The University’s annual Scare Games — a tournament Hardscrabble founded in her youth — is coming up. If Mike can win, it’ll prove he’s a good scarer, and she’ll have to let him back in the program. If he loses, though, he’s out of the University entirely. Mike and Sully wind up teaming with the only fraternity that has any open spots left for the games — the less-than-impressive Oozma Kappa (“We’re O.K.!”), a group of guys who would have gotten picked on by the freshman of Tri-Lambda.

It’s essentially a standard university plot, with the geeks versus the jocks, a la the aforementioned Revenge of the Nerds. It’s not breaking a lot of new ground, but the twists that come about because of the characters being monsters keep it entertaining and fresh. There are also some call-forwards in the film to Monsters, Inc., such as Steve Buscemi reprising his role as Randall — who isn’t quite as odious here, but you can see the traits that will lead to it. Being a prequel, there is a certain risk of there being a lack of suspense. Certain things are a foregone conclusion, after all; to take an extreme example, we know that Mike isn’t going to die in a shootout along the way. (We also know this because it’s a Pixar film, not a Sam Peckinpah film.) But even when we’re sure what’s going to happen, it still maintains suspense — the characters, both in voice and expression, are so believable in their apprehension that it works to carry the audience through as well. And it would be a mistake to think there are no surprises; it may be a prequel with a standard premise, but there are things that I never would have seen coming. Director Dan Scanlon (making his first animated feature here) shared writing duties on the screenplay with Daniel Gerson and Robert L. Baird from the original film; the trio deserve a lot of praise for overcoming the difficulties of keeping things fresh.

Visually, because of course with Pixar we have to discuss the visuals, the movie is yet another improvement over its predecessors. It’s a subtle one, though, and if I hadn’t read an article about it beforehand, I’m not sure if I would have noticed. This is because the improvements Pixar made were to the lighting system, with the result being that scenes are lit more naturally, as opposed to conspicuously even background lighting. It’s the sort of thing that, when it’s done right, as it is here, you don’t notice if you’re not looking for it. Suffice to say that despite being full a rainbow of bizarre creatures, Monsters University has some of the most realistic scenery in Pixar’s filmography. It’s also nicely detailed, and unless I’m reading too much into things, Pixar is playing on the Disney tradition of “Hidden Mickeys” by having “Hidden Mikes” in places. At least, the O in “O.K.” resembles Mike closely, and so does the ornamentation on the University gate pillars.

The characters are nicely detailed as well, even more so than in the original film, and are adjusted just slightly for their age. Sully is as hairy as before, and his hair moves even more believably, but he’s slimmer at this point in time. Mike’s skin has a bit more richness to it, and he wears a retainer, which is an amusing trait for a monster to have (though, as a wannabe scarer, you’d think he’d want crooked teeth.) Other characters are highly imaginative; while there are some that are similar types to each other, it always seems to be deliberate. Any unrelated character looks radically different from everybody else — or from any other monster you may have seen before. (Dean Hardscrabble may resemble a dragon in some of the previews; this isn’t quite accurate.)

The sense of humor is intact. While there were only a few moments that truly had me laughing out loud, I was smiling whenever I wasn’t laughing. The film also has as much heart as the original. Some of it’s a bit saccharine (we all know what’s coming with Oozma Kappa’s early incompetence), but the relationship between Mike and Sully really works well, and further enriches the characters. Which is ultimately what Monsters University does for Monsters, Inc. It may not be quite as good as its predecessor, but it doesn’t harm the franchise’s legacy, it builds it up. Which is exactly what a prequel ought to do.