Like any other movie blogger, I enjoy arguing with the Academy Awards. Indeed, part of my goal with my quest to see all the Best Picture nominees and Best Animated Feature nominees is that, having done so, I can then determine whether or not I agree. And because it’s the sort of thing that can foster good blog discussion, I thought that I would share my thoughts once I was in a position to form them.

This is going to be a sporadic and unordered feature in “Top X”, as I can’t guarantee when I’ll have seen all films from a particular category and year. And I’m only looking at Best Picture (because it’s the big one) and Best Animated Feature (because it’s fun). But when I’ve seen them all, then before too long after my review of the last film in the group, I’ll be ranking all the nominees, as well as mentioning (but not ranking) any films I feel were unjustly omitted. And the first group I’ve completed is the group of nominees for Best Animated Feature, 2003. There are only three nominees for this group, so I considered waiting and lumping with another post. But I considered that any such lumping led to undesirable effects elsewhere. Besides, there’s nothing wrong with an article being a little shorter than normal, so here goes.

A young Inuit man kills a bear in anger; as punishment, he is then turned into a bear himself, and becomes the guardian of a young bear cub.

Of the three films that were nominated for Best Animated Feature of 2003, Brother Bear is the one that stands out as not quite belonging. I wasn’t particularly fond of the film, giving it only three out of five stars. I thought it was largely forgettable, and retread a lot of ground from Bambi in an even more ham-fisted manner. And it doesn’t seem I’m alone; it received a critical drubbing (38% on Rotten Tomatoes), and its IMDb score is 6.6 — not bad, by any stretch, but not remarkable either. It seldom, if ever, comes up in discussion of favorite Disney films — or even favorite modern Disney films.

So why was it nominated? I’m a bit perplexed, to be honest, save for a few things. First, it is Disney, and it’s difficult to picture Disney being excluded during any year. And second, this was fairly early on for the category (it was only the third time the award was given out). Standards may have still been a bit in flux; certainly the number of nominees was (and is). Finally, it may simply have been a nominee of last resort. They had to have three, after all. More on that later. 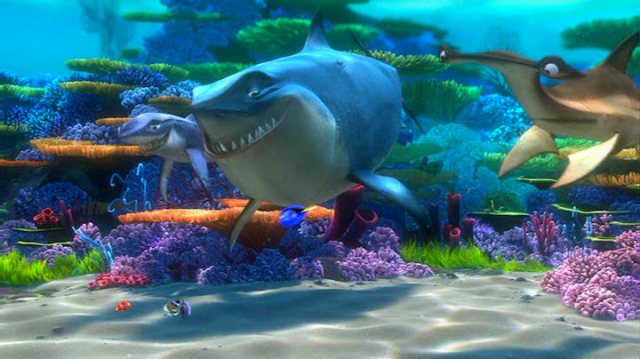 Deep in the ocean, Marlin, a clownfish and a widowed father, tries to raise his only son as best as he can. Intensely protective, Marlin’s worst fears are realized when Nemo is captured by a human.

If Disney’s hard to keep out of the running, Pixar is just as hard. Of course, for 2003, this was considerably more justified. Both studios generally produce good work, but Finding Nemo was another case of Pixar raising the bar for animation in general. It’s charming, it’s heartwarming, and it has its moments of humor. And it’s vividly colorful and beautiful to boot. It’s small wonder that Pixar feels confident in planning a sequel to it more than ten years later; people loved this film, myself included. And it’s also no wonder that the Academy not only gave it a nomination, but gave it the award as well. In most years, I don’t think I would even question its placement at the top of the heap. Even as it is, it’s still a very close second for me.

#1: The Triplets of Belleville 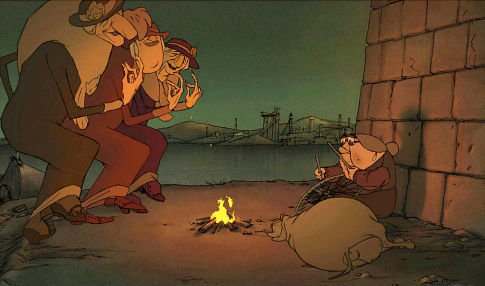 When a woman’s adult grandson is kidnapped, she sets out in pursuit of his captors. As she tries to track him down, she is aided by the Triplets of Belleville, an eccentric trio of former jazz singers.

It is difficult to explain The Triplets of Belleville to anybody who hasn’t already seen it, which may be why it didn’t take home the Oscar — that and its relative obscurity. But in my mind, it stands just slightly higher than even Finding Nemo in deserving that accolade. Like Nemo, it touches on themes of protectiveness and loss, but it does so without a word. It’s all expressions and gestures, as the film is virtually without dialogue. This is not to say it’s a silent film, however; it’s raucous and exuberant, with music constantly playing and sound effects going off left and right. And the audience watching it will be raucous and exuberant as well. Relying solely on visual gags and timing, the film is so filled with humor that it is difficult to catch one’s breath from laughter. Drawn in two-dimensional hand-drawn animation — yet too idiosyncratic to call “traditional” — its sense of style makes it one of the most unique animated films around. Even Sylvain Chomet’s follow-up, The Illusionist, bears it little resemblance. For my money, it was an easy choice for the Best Animated Feature of 2003. 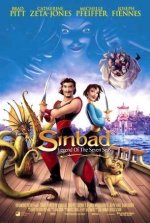 One of the common complaints leveled at the Oscars each year is one film or another getting “snubbed” — omitted even from the nomination list, despite the complainer feeling it was one of the best films (or even the best). I’m no more immune to this than anybody else, and so I thought it would be worthwhile to check out the omissions when I do these lists. However, this time I’m not sure the Oscars missed anything of significance, and not just because I haven’t seen most of these films. It’s difficult to gauge eligibility exactly (IMDb allows searching by year, but not by “year of release in an area that counts for the Oscars”), but checking out 2003 doesn’t yield very much for notable animated features. It might be that Brother Bear made it in simply because there wasn’t anything else. 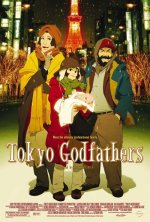 Sinbad: Legend of the Seven Seas looks moderately interesting, but its IMDb rating is an unspectacular 6.5, and it only has 45% on Rotten Tomatoes. I have trouble picturing either The Jungle Book 2 or Piglet’s Big Movie as serious contenders, and it would have to be a mighty dire year for Rugrats Go Wild to eke its way in. This mostly leaves foreign animated films, but even among those which I can tell were eligible, there’s not a lot that’s standing out. Tokyo Godfathers looks the most promising, with a 90% RT rating and 7.7 IMDb score. But ultimately, I’m not seeing anything here that screams for inclusion.

So with that said, let me know in the comments what you think of this ranking. Am I offbase in bumping the winner down a step? Am I being too unfair to Brother Bear? And is there a film that should have made it in but didn’t?