It’s a truism in Hollywood that if somebody has a successful film, somebody else is going to try to imitate it. It’s often lamented today, what with the internet providing a greater amount of movie discussion, but it predates the world wide web by several decades. So it should come as no surprise that Dirty Harry, the seminal “good bad cop” film starring Clint Eastwood, spawned imitators of its own. Michael Winner’s The Stone Killer, released two years later in 1973, doesn’t even bother to hide its influences very much, putting “This cop plays dirty!” right on its poster.

When making an obvious imitation on the heels of the film that inspired the genre, it’s difficult to make it truly great on its own. Even making it good requires a novel, intelligent script, and a terrific lead actor. The Stone Killer falls short on the first score, but at least achieves the second with a perfectly-cast Charles Bronson.

That’s right, punks, he’s your worst nightmare: a Bronson with a badge.

Interestingly, this was actually the year before Death Wish came out and permanently locked Bronson into being typecast, but Detective Lou Tulley isn’t far from Paul Kersey anyway. He lacks the personal motivation, and makes a pretense of following the law, but that’s about it. He has a reputation for roughing up suspects and for shooting first and asking questions later, should there be any survivors. An officer in New York, his reputation takes a hit when a young robber falls to his death off a fire escape during a chase, and decides to take a position he’s been offered in Los Angeles. A routine drug bust there sends him back to New York, however, taking a fugitive that’s being extradited on other charges… and this leads to uncovering a complex gangland assassination plot.

If the idea of sending a New York cop to L.A. only to send him back to New York sounds a little convoluted, allow me to reassure the reader that it is in fact very convoluted. Tulley bounces back from city to city (and occasionally other cities) so often that it’s difficult to keep track of where he even is, let alone what he’s doing there. If it weren’t for the scenes with Martin Balsam as the former crime head planning his revenge, it would be difficult to follow the plot at all. Even as it is, it’s something of a mess, and Bronson and Balsam have to carry the film on their considerable charisma, as nobody else is given enough of a part to support any of it. 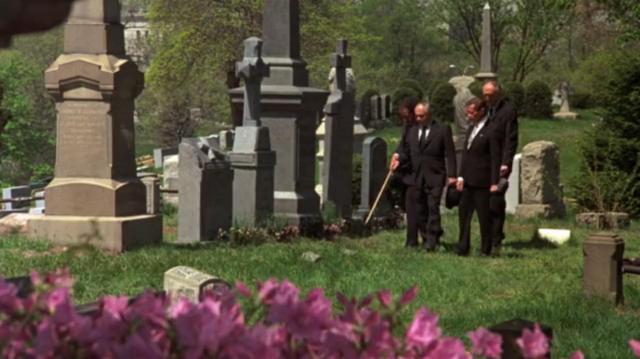 We are gathered here today to pay our respects to the plot, missing in action and presumed dead.

Despite having a plot that requires a road map to keep track of (even if it does helpfully provide that map), The Stone Killer isn’t without its good points. The film is capable of ratcheting up the tension considerably, and the action sequences pay off this tension successfully. Charles Bronson is as entertaining as always on screen, and anybody who is a fan of his will enjoy seeing him do his thing (that thing, of course, being him busting heads.) Those who aren’t familiar with Bronson, however, will probably be better served by finding a different film to be their introduction to him.

4 Responses to The Stone Killer