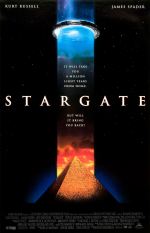 Stargate was released in 1994, and though it had mixed reviews and a merely moderately successful take at the box office, MGM followed it up with a TV franchise that ran for several years. One of the interesting things about a film that spawns a long-running TV series is that even without watching the film or the series, it’s impossible not to learn some things about the franchise. In the case of Stargate, even beyond the obvious “there’s a gate and it takes people to the stars”, the basics of the plot were well known to me for years before finally settling down to watch. Military personnel activate a teleportation device, travel to another world, and fight aliens who pose as ancient Egyptian gods. Nothing complicated.

That didn’t mean I was going to skip it, of course. After all, it’s the progenitor of one of the longer-running sci-fi franchises around, action films are usually entertaining, and I am of course a big fan of Kurt Russell, like all right-thinking people.

Federal law requires all U.S. citizens to view at least five Kurt Russell movies before the age of 30 or face fines and prison sentences.

In Stargate, Russell plays Colonel Jack O’Neil, assigned to oversee a project involving an artifact recovered from ancient Egypt. Discovered in the early part of the 20th century, the artifact is far beyond what ancient Egyptians could have built, and even beyond what humans can build in the present day. The inescapable conclusion is that it was built by aliens, and eventually they are able to determine that it’s some kind of transportation device… the only question is how to make it work.

Special note to the people behind the History Channel’s Ancient Aliens: This is not a documentary. Please stop treating it as one.

Brought on board to translate the writings and symbols on and around the device is Dr. Daniel Jackson, played by James Spader. Jackson is essentially the main character of the film, with Russell filling the role of main supporting character. It’s arguable that the focus should have been reversed. Jackson is awkward, absent-minded and a bit withdrawn. He doesn’t know how to handle himself around the military personnel or the people he encounters once they activate the gate and travel through it. He’s a character who has “sidekick” written all over him, but he’s the protagonist. That kind of switch can work sometimes (another Russell film, Big Trouble in Little China, plays heavily with the protagonist/sidekick relationship), but here it doesn’t quite click. Jackson just doesn’t have enough personality or development to carry the film, and O’Neil, being out of focus, also doesn’t get enough of either to balance things out. In a way, it’s obvious how the franchise was a bigger success as a TV series than a movie. The level of characterization in the film feels a lot like a TV pilot, where broad strokes and highlights form the rough picture of a character to be filled in later.

Jaye Davidson plays the villain of the film, and while his characterization isn’t particularly developed either (being a fairly standard dictatorial megalomaniac), this isn’t as big a flaw in the case of a villain. Davidson manages to give Ra an oily sense of presence that makes him a reasonably entertaining villain.

With Roland Emmerich in the director’s seat, a visual spectacle is the natural expectation, and Stargate doesn’t disappoint. Alien artifacts abound, and the minions of Ra have a great visual design inspired by ancient Egyptian hieroglyphs. Nearly all of the special effects hold up well, and will still be a treat for new viewers. The one notable exception is the “travel” sequence that occurs when characters go through the stargate — it not only doesn’t hold up well today, it doesn’t really work even by the standards of 1994. Showing the characters go through the water-burst on one side and out the other, without the trippy tunnel-of-light effect between, probably would have worked better.

Also, as I’ve said before, an alien sky should not feature Earth’s moon.

Still, visuals alone don’t make for a great film, especially when it relies heavily on some battle sequences that fall just a little short of being as impressive as they need to be. There’s the seed of greatness in Stargate, but it doesn’t quite achieve full bloom. Things aren’t quite exciting enough, and characters aren’t quite developed enough to really care about them, especially outside of the roles played by Spader and Russell. Even so, it’s still an entertaining film, and far from the bottom of science fiction; it just doesn’t reach the top, either.