Once Upon a Time in Mexico 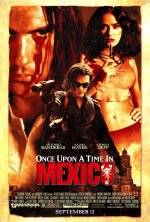 Released in 2003, Once Upon a Time is the third and — hopefully — final film in Robert Rodriguez’s El Mariachi series of films, about a Mexican musician who goes on a violent rampage of revenge. I say hopefully final, because with the third film, it becomes abundantly clear that it’s not a sustainable story over that many films. Where El Mariachi was occasionally a bit of a mess due to Rodriguez’s inexperience at the time (and probably also due to offering himself as a guinea pig for medicines in order to fund it), Once Upon a Time in Mexico is just a mess overall, without the excuses of the first film.

A significant problem is down to the basic nature of the story. El Mariachi (Antonio Banderas) isn’t simply a hired gun, nor is he a man who goes out and seeks to right the wrongs of the common people, though he can certainly be talked into it. He’s a man out for revenge. But that means that in each film, if you want him to get his revenge, he has to have something new to avenge. It starts to get a little hard to believe as he keeps getting wronged by more and more powerful drug lords and would-be dictators. Even though in this story he’s also roped into a plan to defend the Mexican president from an attempted coup, his motivation is still the opportunity to get revenge on the latest drug lord to have wronged him. You would think, given that he never gets involved without a personal motivation, and the reputation he’s acquired at this point, that they would simply say “Yeah, he’s caused our associates problems in the past, but if we don’t bother him, it’s not our problem.”

Johnny Depp plays the CIA agent who ropes El Mariachi into the scheme to stop the coup. Like a lot of Depp characters, he’s an extreme eccentric, which Depp handles reasonably well — although it’s hard to escape the fact that even by 2003 the audience has already gotten used to Depp acting quirky. It’s also hard to escape the fact that the character is simultaneously being played as being outright psychotic and yet is being portrayed as somewhat likeable at the same time. Like most of the films, the only true “good guys” are El Mariachi and his fellow musician-hitmen.

The stakes are higher in Once Upon a Time in Mexico, and so is the violence, and the absurdity in the violence. This is still the same hyper-stylized approach to gunfights that includes impossible shots and ridiculous weapons. Of course, that’s what the audience has come for, and it’s the part that works reasonably well. If you can enjoy the silliness for what it is, it makes for a reasonably entertaining piece of film… but it’s only a piece. The rest of the film is simply a mess. Characterization is shallow and repetitive; indeed, if you haven’t seen the previous film, there’s little reason to care about El Mariachi and what he’s doing. The plot is essentially just an excuse plot; there are many times when it’s completely possible to forget there’s an actual plot going on at all. It’s essentially one gunfight strung along after another. It’s fine if that’s all you’re looking for, but there are many other films that provide the same thing just as well, and provide an entertaining story on top of it, including its predecessor Desperado.

Fan of movies and other media
View all posts by Morgan R. Lewis →
This entry was posted in Movie Reviews and tagged 2000s, 3 Stars, Antonio Banderas, El Mariachi, Johnny Depp, movies, Once Upon a Time in Mexico, reviews, Robert Rodriguez. Bookmark the permalink.

2 Responses to Once Upon a Time in Mexico