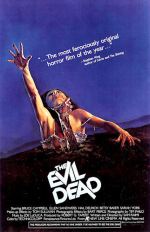 As a general rule, I prefer to watch movie series in order — if I haven’t seen the first film, I’m not going to watch the second. This is partly to avoid spoiling the first, but it’s also because of various little oddities that occur when watching a series in anachronic order. In the case of The Evil Dead, I saw Army of Darkness with some friends many years ago, but had never seen any other films in the franchise until now. Army of Darkness is the third film in the franchise, so besides knowing who survives the first, it also causes a bit of a perspective shift on the film.

Perhaps most notably, watching Army of Darkness gives one the expectation that the whole franchise is a horror-comedy. But Sam Raimi’s original 1981 Evil Dead is actually fairly serious.

If you’re really missing the punchlines, just import them from AOD; for example, his sister got real ugly.

The story is a simple and standard horror movie fare. A group of young adults, consisting of two couples and the younger sister of one, go to a cabin that they’ve rented in the woods. There are a few hints of supernatural activity early on, and the youngest (Ellen Sandweiss) seems particularly sensitive, with her hand drawing an outline of a book against her will. A little routine exploring around the cabin, and the group actually finds the book, but can’t read it. It’s in an ancient language none of them are familiar with. But they find an old reel-to-reel tape player and some tape, and they start listening to it. It seems a previous owner of the cabin was a professor of ancient cultures, and the book was a ritualistic summoning for ancient demons. The professor, not believing in the demons, read the book out loud, and released them. The area has been quiet since he put them down again, dying in the process, but the book still has its potency. And, unfortunately for the cabin guests, it turns out that playing a recording of the words has the same effect as speaking the words.

Here’s some paranoia fuel for you: You’re watching a recording of people releasing demons through a recording. And they all thought it was fiction, too.

There’s a weird thing that happens as the victims get possessed one by one: the acting improves. The actors were all essentially amateurs when the film was made, and though Bruce Campbell would go on to become an accomplished actor (if primarily in B-movies), he’s not there yet. It’s possible to see his potential, but he’s still just a little shaky in his acting. But he’s still the best actor in the film, and so it’s a good thing that he’s in the lead role as Ash. The other actors are fairly stiff initially, when they’re just playing their young couple characters; they loosen up and start showing some actual talent once they’re possessed. It may be due to the standard horror film deficiency in characterization, but apparently it’s easier to act like an ancient demon than a normal human being.

One thing that sets The Evil Dead apart from its brethren in the horror genre and zombie movies in particular is that it’s not simply a constant kill-fest. Oh, Ash is on his own reasonably quickly, but with a lot of films featuring the undead, the hero eliminates them as quickly as they come, and the main danger is simply from being overwhelmed. In The Evil Dead, it’s arguably a bit more realistic, as Ash is clearly in danger of being overwhelmed even with only four opponents instead of the waves of dozens that zombie-survivors typically wade through. The element of creepiness is also ramped up, as they aren’t simply a mindless threat — the demon-possessed spend a lot of time not attacking, but merely taunting Ash with the inevitability of their victory. Betsy Baker’s character is particularly notable in this regard, as much of the time she’s simply sitting on the floor, speaking in a sing-song voice, and she still manages to be creepier than the threats in a lot of horror movies.

Aside from the creepiness, the film does inspire some revulsion in the audience in other ways that may be a little tough for some viewers to take. A lot of the special effects are not merely gory, but fairly disgusting on top of it. And the scene where Ellen Sandweiss’s character is assaulted by trees is disturbing not through being frightful, but through being just plain weird and creepy in the non-horror sense.

The gross-out elements aside, though, The Evil Dead is an entertaining film, even with the amateurish acting. I look forward to being able to bridge the gap in my viewing by checking out Evil Dead 2.