Before I get into the actual review, I think it is probably worth mentioning that I have never seen the original Wrong Turn. I have no idea whether it is a good film or not, as receiving Wrong Turn 2: Dead End in a VUDU promotion was the first I had ever heard of the franchise. Normally I try not to view movie series out of order, but in this case, I suspected that, as with a lot of low-budget horror “series”, there would be very little continuity between the films. This suspicion bore out, as there was nothing in the film which assumed prior knowledge of the story line.

The video cover for Wrong Turn 2 boasts that it is the “Unrated” edition. This is a strange thing to boast of, as it is a direct-to-video film and would not have been subject to the MPAA’s rating system in the first place. In retrospect, the logic gap in the label should have been a clue as to the quality of the film. 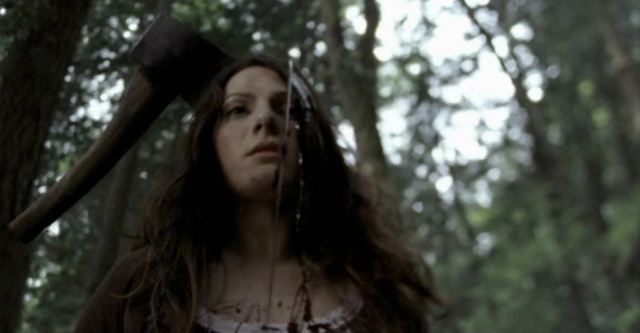 I presume from the title that the original film involved some folks getting lost. In the sequel, the prospective victims are out in the woods deliberately; they’re filming the pilot to a reality competition show with a post-apocalyptic theme. Naturally it’s not too long before they find themselves struggling for survival for real.

As is common for the slasher genre, there is a mix of semi-developed characters and human props. There’s the guy who makes obnoxious jokes, the demure girl, and the sex kitten, and a few guys who don’t even get enough characterization for off-the-cuff labeling. Then there are some characters who get a little more depth, if only marginally. Henry Rollins is the biggest name in the film, playing the host of the show, a former colonel in the Marines. One of the contestants, Daniella Alonso, is also a Marine. So there are actually a couple characters capable of fighting back, which at least prevents the movie from being completely dull. Texas Battle plays a jock who is a good Christian kid, repulsed by some of the more lurid aspects of the planned show. Erica Leerhsen plays an angry vegan loner. Even the characters with a little more personality don’t get a lot of depth, but there is a surprising degree of likeability in the performances. Most of the actors are reasonably capable in their roles — though Rollins is the standout performance thanks to how colorful his character is — and it almost makes it possible to care about what happens to these characters.

Even in a genre known for having serial killers get spat back out of hell to terrorize the living this stretches disbelief a bit.

It is almost impossible to go more than five minutes in this film without rolling your eyes at something. Everything is over-the-top and utterly ridiculous. A character gets bisected, claymore style, by a hatchet with the greatest of ease. A cameraman wants a couple of the contestants to have a sex scene, on what is purportedly intended to be a network show. Characters stumble into traps one after another with the triggers set so close together that it feels like a game of Domino Rally. It would almost work as a parody of the genre, except that it is making no attempt at all to be funny.

The film also has some distinct technical errors. The unfathomably ugly makeup used for the cannibals is about the only special effect that is arguably done well (and considering it’s completely unbelievable, this is a hard argument to make). Fake body parts are unconvincing, often due to a lack of blood, including on the bisection scene mentioned above (and yet, curiously, there are scenes where it tries to gross out the audience with blood dripping onto gleeful cannibal mouths; did the director forget to have the blood in the other scene, or was there just not enough to go around?) With that same scene it’s also possible to spot a bit of the production crew managing the props. Scenes where characters are injured or killed by weapons never quite seem real, and in at least a few instances it’s possible to see a “corpse” breathing — I’m more inclined to blame the director for this than the actor, as the actor has to breathe some time and the director can always cut away. It leads to some accidentally amusing moments when characters are given up for dead but the actors are very clearly alive. 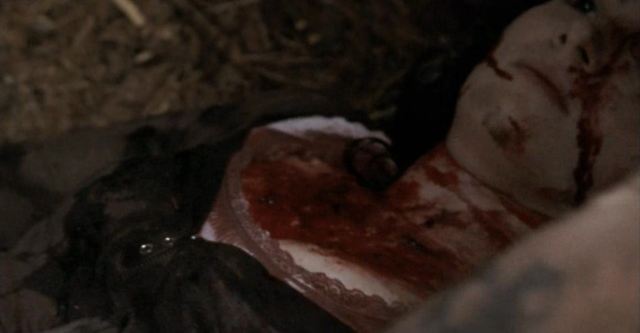 She’s bloody and unconscious; that’s close enough to dead to abandon her to cannibal hillbillies, right?

This was the first film for director Joe Lynch, and this probably explains a lot of the film’s problems. The tone of the film never quite gels, perhaps due to it all taking place at mid-day; somehow a sunny day in the woods just doesn’t feel threatening. Or perhaps it’s because so many of the threats rely on million-to-one shots, and the continued ignorance of some of the characters (regarding the cannibals as well as interpersonal issues) relies on near misses or happening on the right spot at the right time. It’s not that this is unusual for the genre, it’s just that it seldom feels so obvious.

There really isn’t anything to recommend about Wrong Turn 2. Its premise is hokey, and the execution of it is even hokier. The production values are one step above amateurish, and it’s not a very large step. Watching it is something of a wearying experience, as one keeps wondering when the next idiotic plot device will strike. Some of the characters are interesting and well-acted, but they’re not enough to make the film watchable. Really, they deserved to be in a better movie.

As a final personal note, this film is — as I mentioned at the beginning — a part of my UltraViolet collection thanks to a promotion from VUDU. I’ve deleted the local copy from my computer to save space — I shan’t be watching it again — but UV movies can’t be removed from one’s digital collection. Thus it remains there, easily the dumbest film in my collection — a collection, I hasten to remind you, that includes Valentine’s Day. Hopefully its position in the #1 spot is never supplanted.