Say the name Rankin/Bass and just about anybody who has a passing interest in animation will know who you’re talking about. Though the company ceased production about ten years ago, they were prolific during the 1960s through the 1980s, particularly when it came to producing television series and specials. Most people nowadays will remember them for their Christmas specials on TV — stop-motion classics such as Rudolph the Red-Nosed Reindeer or traditionally-animated specials such as Frosty the Snowman — but in 1967 they produced a monstrous theatrical stop-motion feature, Mad Monster Party? (the question mark is part of the title.)

What Halloween party wouldn’t be improved by a score of zombie waiters?

The party is kicked off by Baron Boris von Frankenstein (voiced by and designed to resemble classic horror actor Boris Karloff) discovering the secret of destruction to parallel his secret of creation. He has found a formula for a super-explosive liquid; one drop has as much power as several pounds of dynamite. To celebrate his success, he puts the word out to his friends in the World Wide Organization of Monsters to come join him for a party. This includes pastiches of all the classic monsters: Dracula, the Werewolf, the Mummy, the Invisible Man, and several others. His own creations are already present, of course. But there’s one more invite to send out: Felix Flankin, his nephew from the “white sheep” side of the family. Felix knows nothing of his family’s dark past, or of the existence of monsters, but he’s about to find out… because the Baron wants to name Felix as his successor.

Naturally not all the characters can get an equal spotlight, and sadly most of the classic monsters are really only there for set dressing. But what remains is an entertaining story, if a bit simplistic (but then, it is meant for kids.) Francesca (Gale Garnett) plays the role of the femme fatale; as Frankenstein’s secretary, she’s jealous of this unknown being given stewardship of the Baron’s legacy, and cuts a deal with Dracula to eliminate him. This causes an internal conflict with the Monster and his Mate, who also want to inherit the laboratory and works of their creator. What results is a fun romp with cartoon violence between classic monsters.

It’s apparently a typical outcome of their parties.

Allen Swift provides nearly all the major male voices in the film, save for the Baron himself. He shows quite a bit of versatility, as Felix Flankin, Dracula, and Yetch the zombie all sound quite distinct. Dracula is of course a bit of a Bela Lugosi parody, and Yetch is the standard cartoon imitation of Peter Lorre. He doesn’t just get the accents right, he gets the intonation as well, even when the characters are supposed to be slurring their words. Gale Garnett does quite well in her role as Francesca, with a sultry menace to her voice, and of course Boris Karloff is always brilliant. The one negative in the voice acting is Phyllis Diller; she plays the Monster’s Mate (i.e., the Bride of Frankenstein), and the character is redesigned to resemble her. I’ve never been a huge fan of Diller, and her voice is a little tough to take in large doses. It doesn’t help that the Monster’s Mate is essentially Diller in personality as well, with her sense of supremely bad puns. And it especially doesn’t help that she gets an ear-bleeding song to herself. However, this is just a blemish on the overall high quality of the picture.

The animation is great. Using clay animation as opposed to the harder plastic puppets of Rankin/Bass’s typical stop motion, it’s just a little bit smoother overall. Jules Bass himself directed the picture. Characters have great visual designs; they’re always recognizable as the classic characters (with the exception of the Monster’s Mate, who as noted is pretty radically altered), but they have their own distinct flare as well. They’re bright and colorful, and there’s a lot of fun to be had just looking at all of them. 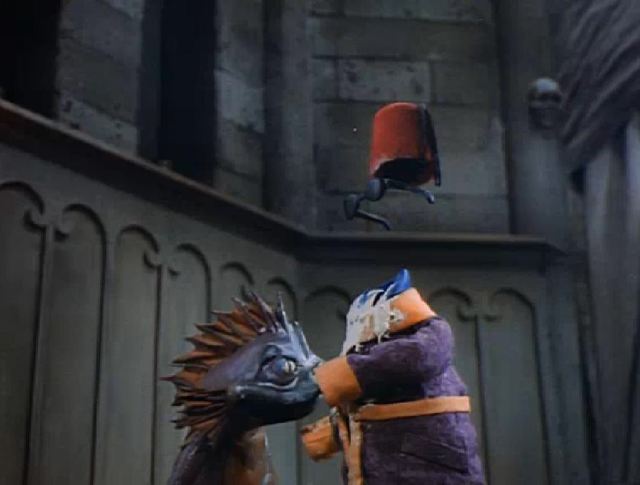 It occurs to me I have no idea how they did this. I can’t even see wires or color bleed from a green screen.

Mad Monster Party? is simply a treat. Kids would love it, and it fit in perfectly with classic Halloween specials (though at 90 minutes it’s a sight longer than most). And adults who have a good sense of fun and love seeing different takes on the classic monsters will enjoy it as well.