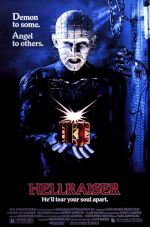 Here’s a fun thought experiment for movie fans. Find a movie which has a cult following, watch it, and try to figure out why it has that following. If it’s a genuinely good movie, then of course this isn’t much of a game, but on the plus side you’ve just watched a good movie. If it’s a bad movie, then it can lead to some interesting things to think about, particularly with how those traits that led it to being a cult classic could apply to better films. It’s a win-win.

Hellraiser is a good film for this purpose. Just about any horror film has, at best, a cult following, but Hellraiser is more cultish than most. It spawned a franchise, and has a loyal following, but hasn’t ever been on the level of A Nightmare on Elm Street, Halloween, or Friday the 13th, despite coming from the same general era.

Written and directed by horror novelist Clive Barker, Hellraiser is primarily about criminal psychopath Frank Cotten (Sean Chapman). Frank seeks out a mystic puzzle box, solves it while going through a dark ritual, and is flayed alive and taken to Hell by demons. A few months later his brother (Andrew Robinson) accidentally spills his blood in the right spot, and Frank starts coming back, bit by bit. Sister-in-law Julia (Clare Higgins), who is in love with Frank, begins helping him come back to life by luring strangers into the house and killing them.

It’s easy to pinpoint the reason this film caught a cult following, and that reason is Pinhead, the leader of the demons (the film’s self-important dialogue has him say he’s an angel to some, but we don’t see anything remotely angelic from him or his group). Portrayed by Doug Bradley under heavy makeup, the character has a striking visual appearance. It’s not just the pins, it’s the meticulously regular positioning of them, and the sectioning of his head. It manages to be unsettling without being gruesome, a line that most of the visuals in the film cross. The film seems to confuse, as so many do, the notion of being disgusted and being frightened. Of course, it also has a distinct intentional sadomasochistic vibe to it, which can be rather eye-roll-inducing. 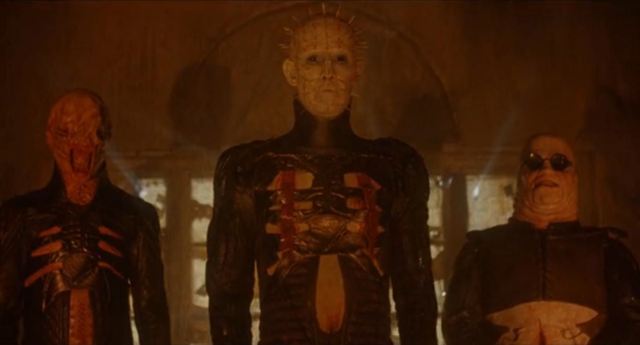 Somewhat creepy by himself. Somewhat doofy in company.

Aside from that one character’s visual appearance, this film has very little to recommend it. The story is dull and the acting is lifeless. Whether in the flesh or as a bloody corpse, the character of Frank Cotten is never more than just a generic thug, the sort of character who would get offed in the first scene of any standard horror movie — and in most wouldn’t be brought back because nobody would care. Clare Higgins as Julia is supposed to transform into this black widow type character, but throughout the seduction and murder of lonely barflies she never seems to be anything more than a bored and boring housewife. Ashley Laurence plays Julia’s stepdaughter, who exists solely to bring things to a conclusion, but is present for most of the film as an equally boring distraction, being stalked by a homeless guy who has no significant connection to the plot.

Will work for relevance. Wait, no he won’t.

The practical effects used to make up the demons and undead Frank are well done, even if some of the demons and the torture scenes fall into the “Grotesque Valley” where they’re too over-the-top to buy into. On a technical level, it’s all quite competent, which makes it all the more interesting when the other visual effects fall flat. To a certain extent, this can and should be forgiven, such as with the magic energy that comes off of the puzzle box. It was 1987, there were limits to their abilities; while it’s not a great example of special effects even for that year, I’m inclined to give Barker and company a pass on that. I have a little more trouble giving them a pass on a much simpler effect, however. There’s a scene with a storm during which lightning is flashing outside a bedroom, illuminating it. Pretty standard fare, but it’s obvious in this case that the “flash” is just a light being turned on and off. It doesn’t look the way a room illuminated by a real lightning flash looks, nor even the way a typical Hollywood lightning flash looks. Lightning is not 65 watt incandescent bulb yellow; the director’s cue for lightning shouldn’t be “clap on”. It’s ultimately an extremely minor aspect to the film, but it’s a good example of how unconvincing the film was as a whole. The impression one gets is that the entire budget for the film was put into the demon makeup, leaving nothing left over for other special effects, editing, or actors.

All this could be forgiven, except the film commits the cardinal sin of movies: it’s dull. The actors sleepwalk through their roles, and who could blame them? The characters are written with personalities flat enough that they’d be extras in any other film. Aside from the initial scene of Frank being dragged to Hell, it takes half an hour for anything to happen. And when it does, it’s fairly bland as well; the murders of Julia’s victims aren’t even all that interesting, as they mostly consist of guys getting repeatedly conked on the head. It’s as though Clive Barker expected the film to work solely from the prosthetics on undead Frank and Pinhead. It’s enough to create some striking visuals, but it’s not enough to carry a film.