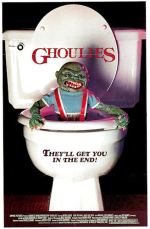 It has to be remembered, when checking out cult films, to make sure one first learns why it has a cult following. Now, to be precise, it’s not Ghoulies itself that was brought to my attention, but rather Ghoulies II, which is brought up periodically on pop culture site Dinosaur Dracula. But as mentioned before, I’m loathe to start a series in the middle, so I thought I would check out the original Ghoulies this year and leave the sequel for the next. As it turns out, unless the entertainment value of Ghoulies II is significantly higher, I may be leaving it alone.

That’s not to say that Ghoulies isn’t entertaining in its own way. It’s just that it is that particular sort of entertainment that one finds in Mystery Science Theatre 3000. It’s a film best suited for when you can grab a couple of friends, get some popcorn, and sit back and heckle the film whenever it does something ridiculously silly. Which in this case is for most of the film. It does have a few deliberately comedic moments, but this isn’t really an intentional comedy… it just winds up that way because of how far short everything falls from its attempts at supernatural horror.

Beware of this man, for he has sold his soul to Lite-Brite.

The film’s prologue features a crazy cult leader, played by Michael Des Barres, planning a satanic sacrifice of his own infant child. The child’s mother saves the boy, and passes him on to another cult member, who is similarly appalled (one wonders how they got involved in the first place). It then cuts to a few decades later, when the boy has grown up into a college student. Jonathan Graves (Peter Liapis) knows nothing of his parents until he comes into his inheritance, the spooky old manor where his father lived and held his rituals. With his live-in girlfriend (lisa Pelikan) in tow, he proceeds to start fixing up the place, eventually coming across his father’s library of spellbooks and his diary. Instead of deciding that his father was clearly a whackjob and using them for kindling, he decides that during their housewarming party, he should have the party guests take place in a ritual. Despite it not seeming to work at first, it unleashes a few spirits — the ghoulies of the title — and gives Jonathan a taste for magic that soon becomes an obsession for him.

Note for our younger readers: No, this man is not possessed. He is breakdancing. It was a craze in the U.S. in the mid-80s. No, the nation wasn’t possessed either.

The hilarity of the film comes in various forms, all of them failures of one kind or another. The audience never develops any sympathy for the characters; between the younger Graves and his girlfriend, the only question is whether the audience thinks the bigger schmuck is Graves for dabbling in black magic or his girlfriend for sticking around as long as she does. The acting comes in two flavors. Most of it is so flat it seems as if the actors are disinterested in what they’re saying; this is most prominent with Lisa Pelican, but whether that’s due to a lack of skill on her part or simply because she has the largest supporting role is uncertain. (Viewers who enjoy spotting the debuts of favorite actors may want to take notice of Law and Order‘s Mariska Hargitay making her first film appearance here as a party guest… though she may prefer you overlook it.) The other type of acting, of course, is overacting, in the case of the senior and junior Graves characters. Much shouting is involved. A bit of hammy acting can be a good thing sometimes, but it requires entertaining dialogue or clever delivery to work, and here it’s mostly a matter of volume.

The other elements of the film are as comical. The film was the first for director Luca Bercovici (who co-wrote the screenplay with Jefery Levy, for whom it was also a first). There are times when the inexperience shows in the decisions, such as frequent narration from Jack Nance — Jonathan Graves’ guardian as he grew up — lamenting his inability to prevent what was happening to Jonathan while not lifting a finger to do anything about it until the very end of the picture. There’s also some narrative weakness, with the plot essentially being twisted into knots whenever significant magic gets involved. While magic is expected to break rules in fantasy stories (horror or otherwise), it’s still best to have it make some sort of sense within its own rules. As it is, at one point the characters literally say not to question what just happened; they, and by implication the audience, are supposed to just accept it.

And then there are the ghoulies themselves. These are creatures that are too silly in appearance to not be comical, yet they aren’t really played for comedy. They’re supposed to be scary in appearance, but the rubber-puppet nature is too obvious, and at any rate, they don’t really do anything for 90% of the film except hang out around the house. What Ghoulies really offers is a supernatural psychological horror film; or at least, that’s what it’s going for, though it falls far short of being scary. Still, if one is going to title a film and build the marketing around little supernatural creatures, it would be nice to see the creatures do something other than just sit there and scream in unison with the lead actors when they get particularly hammy.

Sing… sing a song… sing out loud… sing out strong…

They eventually do start causing harm, but by then any audience member looking for an actual creature feature will have wandered off… along with anybody looking for good acting, good writing, or a good film. This one’s worth watching only for the fun in making fun.