Mettel Ray, who came up with last year’s My Movie Alphabet blogathon (my entry for which is here), has come up with another interesting movie blogathon to take part in. This time around, it’s a multiple-entry deal, which is really convenient for me as it means that many more posts where somebody else is coming up with the idea on what to write about. (Of course, I now have to play a little bit of catch-up thanks to my brief unplanned hiatus). The theme for the blogathon is “Breaking Emotions”, focusing on those movie scenes that cause the viewer to feel particular emotions. I may not discuss the touchy-feely stuff often on this blog, but the whole idea of watching movies is that they move the viewer in some way, whether it be to smiles, tears, or excitement.

The first two emotions that Mettel Ray has picked out for folks to select scenes for are a couple emotions that I admit I don’t generally find myself in tune with while watching films: Fear and Awkwardness. But just because they’re more scarce doesn’t mean they aren’t interesting…

I seem to be a tough sell when it comes to fear from films. Very few films, even in the horror and suspense genres, get me to feel even a little bit of the creeps, let alone full-fledged fear. And despite watching a month of horror films every October, plus the occasional genre entry outside of it, I have never had a nightmare from a film as an adult. But even so, there are times when a film has a scene that gives me just a little taste of that sensation of creeping flesh… 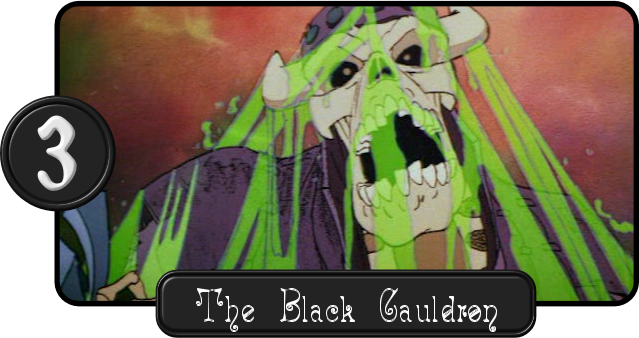 Now, I’m well aware that this is a bit of an unusual pick. But I think it deserves a spot on my list for a simple reason. As I stated above, no film has given me a nightmare as an adult… in point of fact, I can only remember one film ever doing so, even as a kid, and it’s this film. The Black Cauldron came out when I was six years old, and even though I loved the film, the image of the Cauldron-born coming forth stuck in my dreams for a good while. Sure, it doesn’t scare me now… but when I watch the movie, I can still remember that feeling from when I was a little kid. When I challenge horror films to give me nightmares nowadays, I’m essentially putting them up against the effectiveness of a Disney movie from when I was in kindergarten.

Fear can also come in a brief moment of being startled. It may be over momentarily, but it’s no less effective for that. And I don’t care who you are, or how old you are, or how many times you’ve seen it… everybody jumps at the librarian ghost’s transformation. I’ll openly admit I still do, even if it’s only a little jump as opposed to the three feet the first time I saw the film as a kid. What’s great about it is that although Ghostbusters is primarily a comedy, this scene helps solidify the humor by providing the necessary counterpoint; it makes the world of the Ghostbusters believable by establishing early on that even a seemingly-placid ghost can turn out to be a scary thing.

Finally, the only pure horror film to make my list, because it’s the only one that really gave me a sense of actual fear. Not nightmares, perhaps, but Halloween is quite capable of raising a few goosebumps. The classic moment here isn’t during one of the kills, though — in fact, most slasher films would be well-served to remember that the kills themselves are almost never scary. It’s the anticipation, the suspense. And that suspense in this case comes in broad daylight in an ordinary yard in American suburbia. Michael Myers simply shows up for a moment in the background, behind a clothesline. The scene instantly gives the sense that he’s waiting for something, patiently and implacably, and creates a sense of unease by how obvious it is that he doesn’t belong in this plain, ordinary scene. Jamie Lee Curtis’s character looks out the window, and thinks she sees something, and then he’s gone. She gives a great “What the hell?” expression, and shrugs it off. And that’s how fear can really build up… it starts with a “What the hell?”, and the uncertainty of whether you’ve seen anything at all.

For the second emotion, Mettel chose awkwardness, or embarrassment. Well, there have certainly been a few movies I’d have been embarrassed to be caught watching, but I don’t think that’s quite what she means. No, the intent here is to highlight those scenes that bring out that sense of embarrassment in the audience on behalf of the characters, or just at the awkwardness of the situation, whether it be funny or just pitiful. In short, the domain of the cringe comedy. Now, as regular readers know, I hate, hate, hate cringe comedies, and it’s the awkwardness of them that is usually my biggest problem with them. In most cases, I find it completely unbelievable that people would act in those ways, and it always seems very transparent as an artificial construction of the writer. Even the nerdiest nerd in real life pales in comparison to a Hollywood nerd. But there are a few films that provide good, entertaining examples of awkwardness done right.

The meeting between Annie and Alvy is one of the most authentically awkward moments in films, and one of the most honest in romantic comedies. Both characters stumble through introductions and opinions, backtracking and explaining what they’re really trying to say. It succeeds at doing what so many rom-coms try and fail at, in that it makes the mutual awkwardness of these two characters seem cute — and in large part it’s because it makes it believable. It doesn’t exaggerate it. Neither character gets a racquetball to the crotch, nobody gets covered in filth. It’s all just verbal… and the verbal aspect is believable. Neither character is an idiot, and they don’t express themselves idiotically; they just express themselves like two intelligent people who are nervously feeling each other out. It works. And while the viewer may be grinning wryly at them, they will also find it a little endearing.

Good old George McFly. Ordering a milk… chocolate. Telling Lorraine he’s her density. Taking notes as Marty tells him how to win Lorraine over, and asking if he should really curse when defending her honor from a feigned attack. George is about as awkward as a Hollywood nerd can get while still remaining somewhat believable… and that extra note of believability comes from Marty’s reaction to it all. Marty acts as the audience’s surrogate in this scene, rolling his eyes in exasperation, waiting for George to get his act together. “Jesus, George, it’s a wonder I was even born.”

A Fish Called Wanda is one of my most recently-viewed films (it’s my second-to-last review as of this writing), and so normally I’d be hesitant to use it, just in case my perceptions were being affected by its freshness. But it simply fits the concept of awkwardness too perfectly to pass it by. In one scene, Archie (John Cleese) explains to Wanda (Jamie Lee Curtis) why he enjoys being with her, and it’s all about awkwardness. He strips awkwardness down to its bare bones, the fear of saying or doing exactly the wrong thing at the wrong moment, and giving inadvertent offense. He explains that as a Brit, he has a culturally-ingrained case of awkwardness due to the constant pressure to be “correct”, to always be doing the right thing. But around Wanda, he feels free to be his true self, because Wanda is utterly unafraid of saying or doing the wrong thing. Because she never feels that fear, he can share in that and forget his awkwardness. And then mere moments after he gives this speech, a vacationing family barges in on him while he’s naked. Awkwardness is examined and then exploited, and the delivery makes the whole thing a lot funnier than if the mishap had happened without Archie’s speech leading into it.

So that’s three scenes that exemplify fear, and three that exhibit awkwardness. I’ll post my choices for the next two emotions in a few days. In the meantime, let me know your choices for fear and awkwardness in the comments.

Fan of movies and other media
View all posts by Morgan R. Lewis →
This entry was posted in Top X and tagged Annie Hall, Back to the Future, Black Cauldron, blogathons, Breaking Emotions, Fish Called Wanda, Ghostbusters, Halloween, movies. Bookmark the permalink.