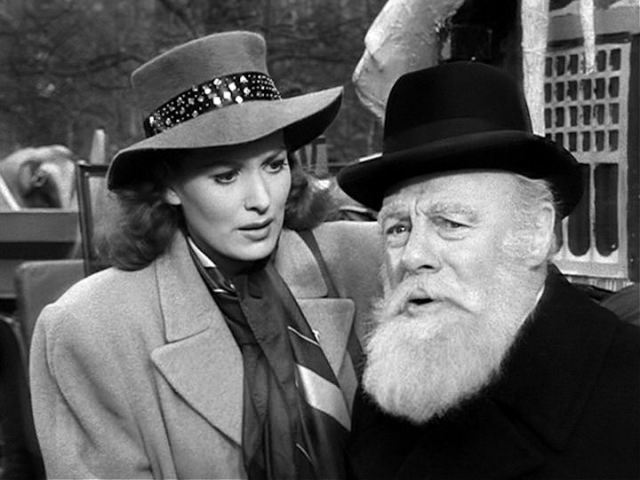 “I am not in the habit of substituting for spurious Santa Clauses.”

It’s almost Christmas, and that means children — and some adults — are eagerly awaiting the arrival of Santa Claus. And while waiting, those people will generally have been watching some Christmas movies, including films about the jolly old elf. According to IMDb, Santa Claus — in one form or another — has been in over 300 films, and over 500 television programs. Naturally his character page has dozens of different photos attached to it… but there can be only one primary photo. For the default profile picture on Santa Claus’s IMDb page, the picture is of Edmund Gwenn, from his portrayal in the 1947 classic Miracle on 34th Street. I can think of no more appropriate choice, as not only is Gwenn’s portrayal spot on, but the themes of the film elevate the concept of believing in Santa Claus in such a way that it lends strength to all performances. 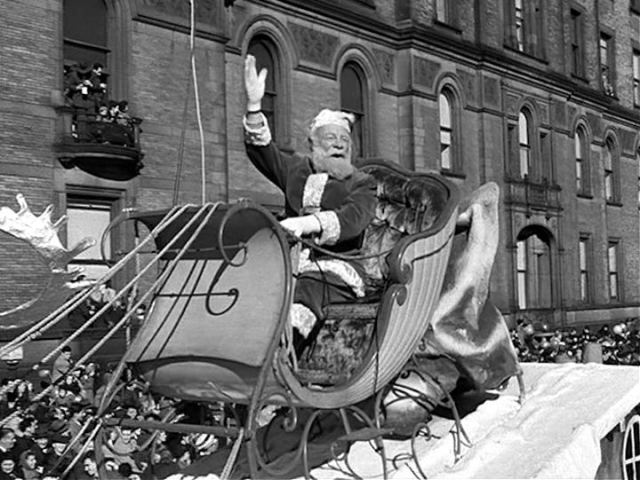 “Well, the children mustn’t be disappointed. All right, I’ll do it.”

Gwenn’s Santa Claus — who introduces himself as Kris Kringle but answers to both — is introduced walking down the streets of New York City on Thanksgiving Day. He finds himself at the starting point for the Macy’s Thanksgiving Day Parade, and discovers to his dismay that the man who has been hired to play Santa Claus is completely drunk. He reports this to the parade manager, Doris Walker (Maureen O’Hara), who — thinking he’s another actor — begs him to take the place of the drunken Santa.

The sequence was shot in 1946… at the actual Macy’s Parade. Although the public was unaware of it at the time, Edmund Gwenn played Santa Claus in the parade and delivered the address in character at the end of it. It required careful preparation and camera placement along the route, as they would not have any second chances during filming. 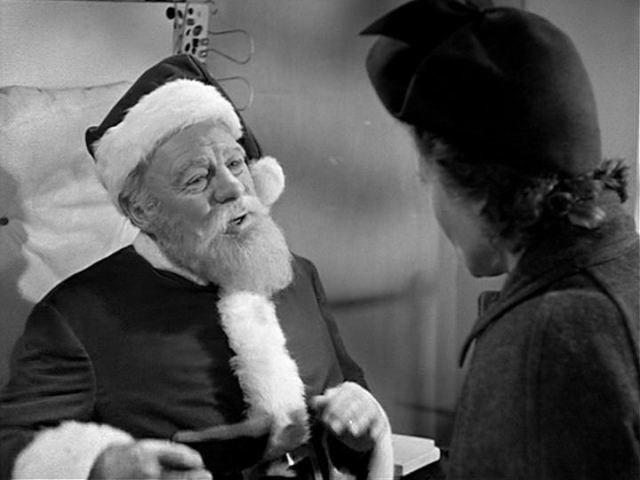 “The only important thing is to make the children happy. Who sells the toy doesn’t make any difference.”

After the parade, Kris is promptly hired to play Santa Claus for the toy department at Macy’s New York store. He proceeds to turn peoples’ expectations upside down by recommending parents shop at other stores when they can’t find the item they want at Macy’s. Although the department manager is initially appalled, he is quickly surprised to find that the parents love it — and say they’ll be shopping more at Macy’s in the future because of the store’s helpfulness. Seeing the profits surge with the “people above profits” mentality, founder R.H. Macy (Harry Antrim) orders that all Macy’s employees start doing the same, across the country. (In reality, R.H. Macy had passed away some 70 years prior to the film’s release.) Competing store Gimbels starts doing the same, and soon there’s an outbreak of commercial generosity and cooperation between the formerly bitter rivals. 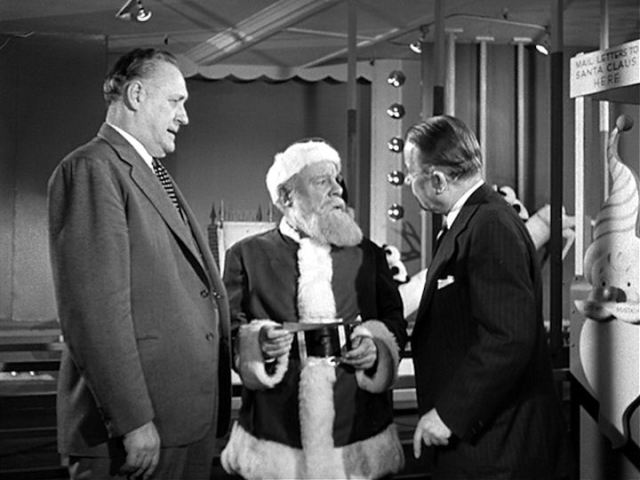 With the film being so focused on Macy’s, it would be natural to believe that this was a story made up to boost sales at the store — similar to Montgomery Ward commissioning the book Rudolph the Red-Nosed Reindeer in 1939, creating a new holiday icon to sell merchandise. But in reality, the filmmakers came up with the script on their own, and had to get permission from Macy’s and Gimbels to use their names. The corporate heads of each store insisted on seeing the final film before giving their approval. It was thus a calculated risk for writer-director George Seaton to go through with the film as planned — had either store refused, he would have had to reshoot or edit many of the scenes to remove the real-life references in favor of fictional stores. However, both stores were ultimately pleased with the film, and it was released without alterations. The use of real stores has the effect of grounding the film in reality — this is not a story of Santa Claus in a magical winter wonderland, it is a story of Santa Claus in urban America. This is particularly appropriate, as the core conflict of the film is the contrast between the fantasy of Kris Kringle and the reality of New York City.

“Do you know what the imagination is?”
“Oh, sure. That’s when you see things, but they’re not really there.”

Maureen O’Hara’s character, Doris Walker, is a divorcee who — while friendly to people — has a touch of bitterness to her over being abandoned by her husband. She no longer believes in fairytale romances, and is raising her daughter Susan — Natalie Wood, in her first major appearance at age 8 — to not believe in fantasy either. No fairy tales. No make-believe. And no Santa Claus. The child is being raised to be a rationalist of the highest order. Kris decides to take on the Walkers as a test case for himself. He’s worried about the state of the Christmas spirit, and believes that if he can get Doris and Susan to believe in him, then there’s still hope for people. Helping him in this is John Payne as Doris’s neighbor Fred Gailey, a lawyer with a romantic spirit who is hoping to win Doris over. 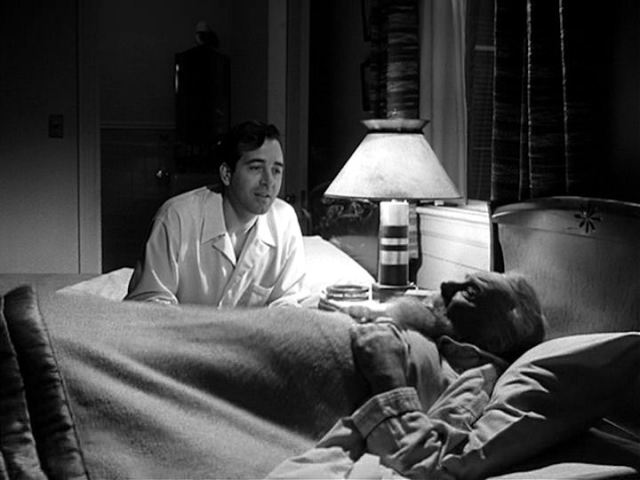 “All my life I’ve wondered something. Now’s my chance to find out. It’s a question that’s puzzled the world for centuries. Does Santa Claus sleep with his whiskers outside or in?”

Kris and Fred gradually start to win the Walkers over, but it’s not all smooth sailing. A man persistently calling himself Santa Claus — even when he’s supposed to be “off duty” — raises a few eyebrows. One of the store’s human resources personnel, who fancies himself a psychologist, doubts Kris’s sanity. Mr. Sawyer (Porter Hall) winds up taking a particular dislike to Kris, as Kris challenges him on his analysis of another employee. When their argument results in Kris bopping him on his head — Sawyer is sufficiently detestable that the audience can easily see even Santa Claus losing his temper with him — Sawyer manipulates events and evidence to have Kris Kringle committed to a mental hospital.

The film production had its own Sawyer to contend with. Fox studio head Darryl F. Zanuck was opposed to making the movie, as he felt it was too corny. He finally agreed to give it a moderate budget, if George Seaton would agree to take his next three directorial assignments unconditionally. These films were Apartment for Peggy, Chicken Every Sunday, and The Big Lift. However, Zanuck was not done meddling. Insisting that more people watch movies during the summer, Zanuck ordered the release date of the movie to be moved to May — with the marketing team carefully removing every mention of Christmas from the promotional material so that people would not avoid the film just because it was a Christmas movie in early May. It was for this reason that the original title, Christmas Miracle on 34th Street, was shortened. 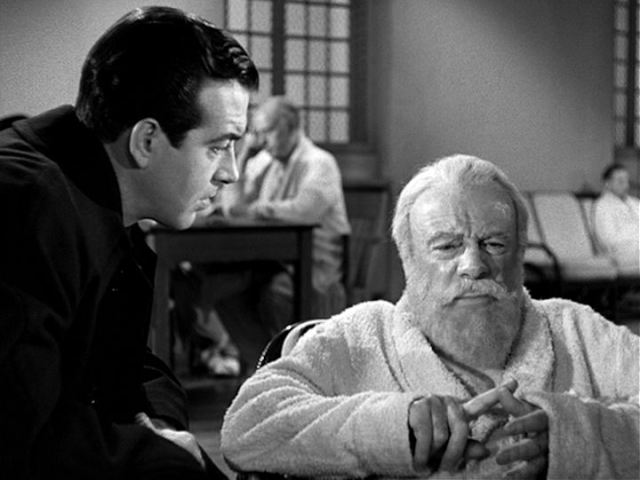 “He’s contemptible, dishonest, selfish, deceitful, vicious… Yet he’s out there and I’m in here. He’s called normal and I’m not. Well, if that’s normal, I don’t want it.”

Fred, at great risk to his personal career, decides to help Kris get out of the asylum. A hearing is scheduled to rule on whether Kris is sane or not. The concept of putting Santa Claus on trial is inspired, as it plays into the same themes of faith and belief that the film has been dealing with from the beginning. Law and society are strictly mental concepts; they exist solely because we say they do and enforce that belief. The sanity of the average person is taken as a base assumption and is seldom challenged; it’s taken as a matter of faith. Similarly, the faith that justice will ultimately be served is an essential belief for anybody pursuing a matter in a court of law. A courtroom is perhaps the most natural nexus of faith and rationality, as the latter is used to define the shape of the former.

Of course, in Miracle on 34th Street, what could be a very dark and depressing proceeding takes a comic turn as Fred decides on an unusual approach for asserting his client’s sanity. 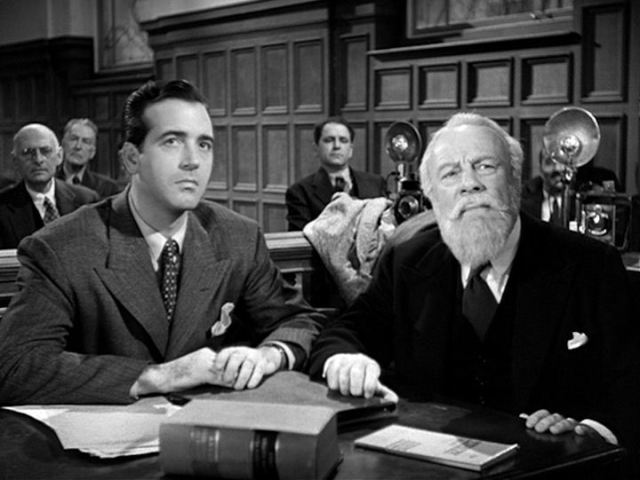 “I intend to prove that Mr. Kringle is Santa Claus.”

The courtroom antics are absolutely hilarious to watch as various people wrestle with the dilemma they’re faced with. Sane adults do not believe in Santa Claus… but it’s a very public hearing, and speaking out against Kris Kringle could have potential backlash. One by one they find reasons to give Gailey the benefit of the doubt. The judge, facing re-election and not wanting to be the judge that told millions of children that Santa Claus doesn’t exist, rules that the court would keep an open mind on the issue of Santa’s existence — to be proven by the attorneys. R. H. Macy takes the stand to declare that Kris really is Santa Claus — the film leaves just enough doubt as to whether he’s purely thinking about profit or if it’s influenced by the goodwill Kris has engendered as well. Immediately after making his declaration, he fires the “psychologist”. The prosecuting attorney is ostracized by his own children for putting Santa Claus on trial — which gets even funnier when Fred calls up the prosecutor’s own son to testify against him. 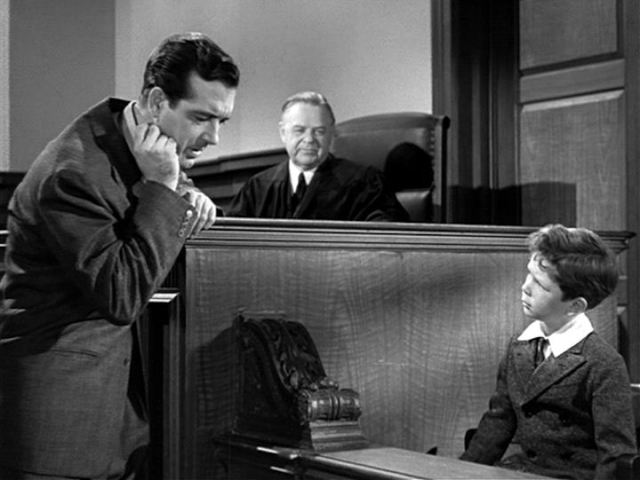 “Tell me, Tommy… why are you so sure there’s a Santa Claus?”
“Because my daddy told me so.”

Just as Fred is able to get Kris officially declared Santa Claus — thanks to the help of some bored U.S. Postal Service workers — Miracle on 34th Street was able to overcome its own trials and tribulations as well. Despite its summertime release and deceptive marketing, it grossed over four times its operating budget. It was well-received by critics as well, being considered one of the best films of 1947… including by the Academy Awards, where it was nominated for Best Picture (losing to Gentleman’s Agreement in a field of five.) It won the Academy Awards for Best Original Story and Best Screenplay, and won the Best Screenplay Golden Globe as well. And Edmund Gwenn — Kris Kringle — won Best Supporting Actor at both the Oscars and the Golden Globes. 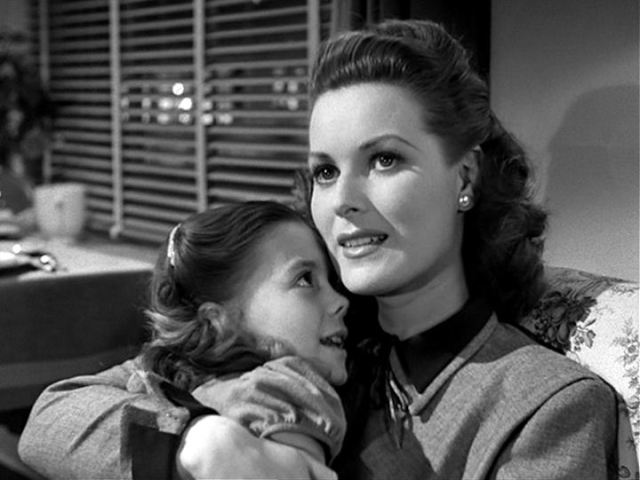 “I’ve got a feeling he is Santa Claus.”

To say that its influence has lasted would be an understatement. It was adapted to radio several times, with all the major cast members reprising their roles twice, and Gwenn coming back a third time. It has been remade three times for television, and once as a theatrical film in 1994 — a film that itself has won a large following. The original still airs regularly during December. In 2005, it was inducted into the National Film Registry. It was nominated for both of the AFI’s 100 Years, 100 Movies lists, but did not make the cut — however, it was #9 on their list of 100 Cheers. It was also #5 on their list of the top 10 fantasy films.

It’s a heartwarming film, as Christmas films should be, occasionally poignant and thoroughly cheerful. It is thoughtful, and explores themes that are central to Christmas movies in general, and the festivities of the holiday itself. It is also a very witty film. One would have to have a heart of stone not to laugh and cheer with this one. It’s one of my favorite films. 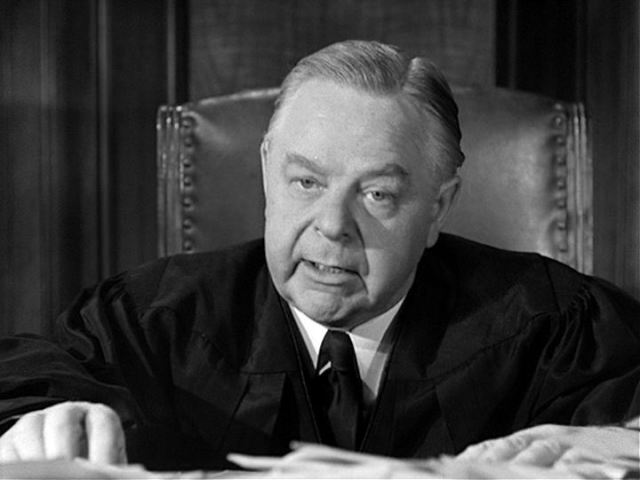 “Since the United States government declares this man to be Santa Claus, this court will not dispute it. Case dismissed.”