There are a lot of issues that can crop up with films, and some of them are sufficiently common to become stock phrases for a movie reviewer. One that I’ve had occasion to use from time to time is that a movie “doesn’t know what it wants to be”; said films have strong elements of different genres and rather than blending them together, there’s a sharp disconnect between them.

But it has to be noted that just because a particular common complaint can be applied to a film, doesn’t mean that it’s necessarily a bad film. Such is the case with Witness, Peter Weir’s film which is part thriller, part romance, but never a romantic thriller. 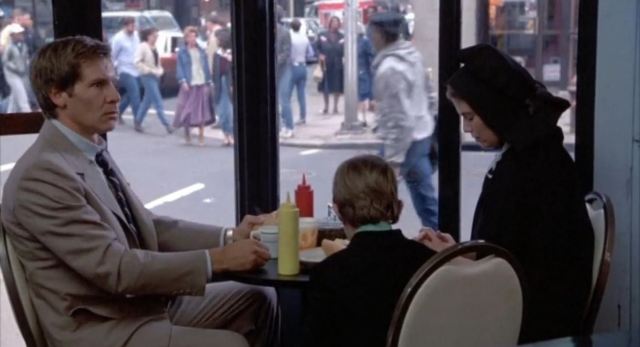 Seldom has the phrase “odd couple” been more appropriate.

When a young Amish boy (Lukas Haas) witnesses Danny Glover committing a brutal murder, he and his widowed mother are brought in for questioning by Philadelphia police. The detective assigned to the case is John Book, played by Harrison Ford, who brings his usual charisma to the role. Book is not quite by the book, but is someone who values the law highly — but also values the well-being of his witness, and tries to treat the boy kindly while he’s in his care. And young Samuel is soon very much in need of Book’s care; when Book discovers the full extent of what the boy witnessed, he realizes that the only way to keep him safe is to hide out with him and his mother in Amish country.

Kelly McGillis plays Rachel, the boy’s mother, and early hints at chemistry start blooming once the two are in regular close proximity and away from the big city. Rachel picks on Book to some degree, remarking on the comments Book’s sister made about him when they met about how he is never going to settle down. There’s a degree of friction between them over the differences in their ways — Rachel particularly doesn’t want Book’s handgun to be ready at hand while in the house — but also a great deal of each attempting to accommodate the other’s ways. Ford also includes some of his trademark “Well, pardon me, Your Highness” expressions during their discussions. It all makes for a believable case of romance-under-pressure where both characters are reluctant to pursue it, as each knows they don’t belong in each other’s world.

It does make for a distinct change of pace in the film, however. Early on the film is a suspenseful thriller and it’s easy to see how it could have continued on that path. But once they’re in Amish country, and the romance subplot starts, the suspense is abruptly halted. The danger is still out there, and periodically Book goes out and pokes the hornet’s nest, but it’s a very distant thing. The sense of immediacy is gone. It’s much like Book’s eventual departure from the Amish community; we know it’s going to happen sooner or later, but while the romance is ongoing it feels like a consideration for another day. And then eventually the thriller elements come back into it and it again feels like a thriller and not a romance movie.

Yet despite this feeling of complete genre shifts, it is by no means a bad movie. All the segments are very good at what they are setting out to be. The thriller sections are indeed suspenseful, the romance section is indeed charming. And though the shift in genre is very strong and rather quick, the transition is handled well enough that it doesn’t feel too abrupt. With a little bit of natural light humor sprinkled throughout, it makes for a film that, while not a solid mix of its genres, is solidly entertaining.