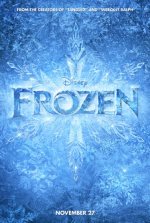 I’m a fan of Disney, but I wouldn’t say that they knock it out of the park every single time. Brother Bear comes to mind as a fairly mediocre offering, and there are several others in the late 90s/early 2000s era that look a bit sketchy. Still, there’s a reason why any film in the “Disney Animated Canon” that I haven’t seen is on my watchlist: Disney is pretty reliable about putting out a quality film. Not universally, but often enough that it’s the expectation, not the exception.

And when one really expects Disney to excel is when tackling a classic fairy tale. It’s how the company got its start, and though many of their films have other origins, the fairy tale stories are still the most recognizable ones. Frozen, based on Hans Christian Andersen’s The Snow Queen, is their latest offering in the genre, and it is clear that it will have as much staying power as any of the others.

It’s a bit funny to think of it. I remember when Disney announced that they were canceling the film’s production (about the time Wreck-It Ralph was first announced, as Reboot Ralph). They were, in fact, getting out of fairy tales entirely, from statements Lasseter and Catmull made in late 2010. These statements came a few days before the release of Tangled. That film didn’t earn its budget back domestically, but it doubled it globally; whether it was its global success or something else that caused Disney to re-evaluate their strategy, Frozen was put back on track, under its new title (no doubt inspired by the same “keep the fairy tale name out of it” reasoning that went into Tangled‘s title). If the heads at Disney have any sense at all (which is a little questionable given this paragraph), Frozen will have reminded them that there’s still a lot of mileage in the genre. It’s been a runaway success, topping one and a quarter billion worldwide, and still has a pretty strong grip on pop culture a little more than a year later.

Frankly, it deserves it. This is an entertaining story, no matter what your age, and it does a great job of using small moments to develop its characters’ personalities. Most of the characters don’t get the explicit “this is why they are the way they are” background that Queen Elsa (Idina Menzel) does, but they do get scenes that establish who they are, and demonstrate their personalities in ways that one knows how they would act in a given situation — and they hold true to those personalities in ways that feel completely natural, and even when there are a few twists thrown in along the way, those twists feel logical and natural. It works because the characters have natural gentle contrasts with each other. Elsa is aloof and withdrawn; her sister Anna (Kristen Bell) is an extrovert chafing against the repressed lifestyle they’ve had. Visiting Prince Hans (Santino Fontana) similarly has felt invisible under his numerous older brothers, and ice-hauler Kristoff (Jonathan Groff) has spent most of his life separate from humanity but readily takes to his strange traveling companions. There’s a complex evaluation of extroversion and introversion in here somewhere, but the end result is that when Elsa’s ice magic goes out of control, there are several characters with different motivations to react to the situation.

There’s a lot of adventure in the film, and also quite a bit of humor, which mostly comes out of the characters’ personalities. I admit I’d had some initial skepticism about Olaf (Josh Gad) the snowman, whose design very clearly says “comic relief”, but he was written well. He is funny and charming, but he’s also a true fully-developed character in his own right. Sometimes a comic relief character feels out of place in a non-comic scene; Olaf feels natural in them, and it’s because he’s not just comic relief. In a lot of ways, he represents the heart of the film.

Frozen puts a modern twist on the fairy tale genre by playing into the classic tropes while also being willing to change things up when necessary. The notion of “love at first sight” which so dominates many early Disney classics is given a nod with the song “Love is an Open Door”, and is then given a hearty skewering as one character after another tells Anna she’s crazy for wanting a whirlwind romance and an engagement without a dating period. Many classic fairy tale tropes are similarly given reference, but few play out the way they do in most stories. It makes for a story that is both familiar and refreshing in its novelty.

And, of course, being a Disney production the film doesn’t skimp on the visuals. The film was directed by Chris Buck and Jennifer Lee; Buck’s third film (after Tarzan and Surf’s Up) and Lee’s first as director. Suffice to say it won’t be the last for either, and one would reasonably expect great things from both in the future. The artists working under them have delivered a film that looks beautiful at all stages. Characters’ personalities are easy to read from their expressions and body shapes, objects are full of detail, and the ice and snow are both realistic in their quality and fantastic in their layout and their subtle variety — important, since, after all, ice and snow are everywhere in the film.

Musically, it’s worth noting that this is the only film of Disney’s (at least, that I’m aware of) where they re-released it to theatres in a sing-along version (which is getting nearly as high a prominence in the home video displays as the regular film). It’s not surprising. The songs are fun, they express the story and characters’ emotions well, and above all they’re catchy. They stick in the head for days afterwards, and not unpleasantly.

And in the same way, I expect Frozen to stick around for ages to come. Like Snow White, Cinderella, and Beauty and the Beast, this is going to be one of those films that becomes representative of an entire era in Disney’s films.