Sometimes you’re just in the mood for a bit of cheese. And for cheese with a bit of a science-fiction flair we turn, as ever, to the 1980s; in this case, to 1985, with Trancers. The film was directed by Charles Band, a dedicated purveyor of schlock. For a good laugh, check out the titles on his IMDb page some time; Trancers may be the high water mark, at least as far as the names themselves go. In fact, Band would go on to form Full Moon Pictures, a studio dedicated to direct-to-video sci-fi and horror. The original Trancers, however, did get a theatrical release, if IMDb and Wikipedia are to be believed.

Charles Band is the son of Albert Band, director of — among numerous other films — I Bury the Living, a film I reviewed in 2013. So he’s a director with a B-movie pedigree. Trancers has an obvious pedigree as well, bearing a resemblance to Blade Runner in plot and themes, if not in budget.

Tim Thomerson plays Jack Deth, a police officer in the 23rd century’s Angel City — built adjacent to what used to be Los Angeles, which has since sunk into the ocean. His main occupation on the force is hunting down “Trancers”, people whose minds have been subsumed by a powerful psychic. “Not truly alive, but not dead enough”, as Deth describes them, they act like normal people until they are activated. Then they turn yellowish and become mindless, highly aggressive zombies; when killed, they immediately vaporize. Deth is given a special assignment when the city’s high council learns that Whistler, the psychic responsible for the Trancers, is still alive and has time-traveled back to 1985 in an attempt to erase the council. Of course, Deth will have to face Trancers there as well. 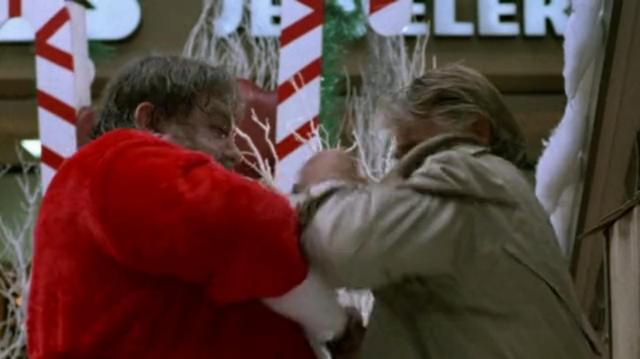 It’s always the same. One minute you’re minding your own business; the next minute, Santa is trying to rip your face off.

For a B-movie, the acting is fairly good. Most of the issues could reasonably be placed on the dialogue rather than the actors, and although it’s pretty cornball in places, it’s entertaining enough. Thomerson’s performance is half imitation of Harrison Ford, and half imitation of the film noir heroes Ford was imitating. Michael Stefani’s performance as Whistler is a bit stiff, but he is believable enough for a B-movie villain who is seldom directly on screen. And Helen Hunt has her first film appearance as an adult here, playing a woman drafted into being Deth’s sidekick and love interest. It’s not a particularly deep role, but Hunt makes it work.

The plot is something of a mixed bag, as is often the case with low-budget sci-fi action flicks. Again, it’s not particularly deep, but it does keep things moving and that’s the important thing. Trancers is a lot of things, but it’s not boring. Its approach to time travel raises a lot of questions, though, which it blithely chooses not to answer. Time travel in Trancers is achieved by means of a drug; this sends the person’s psyche back in time to possess the body of one of their own ancestors. Their own body is kept alive in the future through the use of IVs. An antidote administered to the host body returns the time-traveler to their own body. Note the wrinkle there: the antidote, of course, has to be sent back in time itself in order to be administered. There is no explanation given for any of this, but we can infer that only non-living matter can be physically sent back.

Somewhat screwier is the ramifications of changes to the timeline. Whistler’s scheme is to kill off the council by killing off their ancestors; standard time-travel fare. But the film seems to have it both ways regarding changes in the timeline. When a council member’s ancestor is killed, all their descendants are erased… but apparently only at the exact moment of the “present” in the 23rd century. That is, the council member spontaneously ceases to exist, but everybody remembers that they did once exist. There aren’t instant replacement council members, such as would exist if the timeline were altered by having different people elected. It’s as if time alterations in Trancers work by figuring out what the changes in the timeline would be, but only splicing in the last moment from the altered timeline. And yet, there’s a plot element that violates this by involving a predestination paradox — that is, that other time-travel standard where it turns out that recorded history happened specifically because of a time-traveler.

But the film isn’t too interested in the implications of its science fiction, and that’s OK. It doesn’t aspire to be anything more than a quick action film, and it delivers on that front. But a little more thought may have elevated it some.