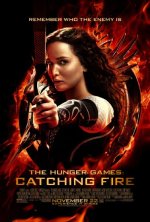 There’s an art to doing sequels, and there are enough critical essays on the subject to be classified as their own genre. One common topic in such essays is a sort of “sophomore slump” for series, where the second movie is notably weaker than either the first or third entry, largely because it has to serve as a bridge between them. The Empire Strikes Back is a famous exception, and there are a few others, but regretfully I can’t classify Catching Fire among them.

It’s not the fault of director Francis Lawrence, who takes over the reins from Gary Ross. Rather, I have to assume the blame lies with novel writer Suzanne Collins. When I reviewed the first film, I wrote “I haven’t been reading the novels. I don’t know where the next part, Catching Fire, takes the characters — presumably they don’t have to re-enroll in the Games themselves.” But that presumption was, as it turns out, entirely incorrect, and therein lies the problem.

In Catching Fire, Katniss (Jennifer Lawrence) and Peeta (Josh Hutcherson) are touring the nation on the heels of their victory of the previous year’s Hunger Games. As before, they witness injustice against the people, and this time they take a stand against it. Even the jaded Haymitch (Woody Harrelson) gets involved. All of this leads President Snow (Donald Sutherland) to conclude that the victors are getting too confident in their roles, and need to be reminded who’s really in charge. So for the special anniversary edition of the Games, he announces a twist: this time the competitors will all be made up of people who have competed before. Katniss is going back to risk her life again in the Hunger Games.

And though the Games are certainly fun and exciting, we’ve seen them before. Immediately before. We’ve seen Katniss train. We’ve seen Peeta spin personal stories like a pathological liar. We’ve seen them make alliances with people they don’t trust. We’ve seen Katniss grow close to a vulnerable competitor only to lose them. We’ve seen it all before. There’s about 10 minutes worth of new territory in the whole film. The end result is something that works as a visual spectacle, but doesn’t feel like it truly advances the story up until the very end.

The third novel, Mockingjay is split into two movies; one released last November, the other this coming November. Perhaps this is the right decision for that book, and perhaps it isn’t; I’ll know when I’ve seen them. But if splitting Mockingjay does turn out to be the right choice, maybe a better option would have been to just have a trilogy where the second film was the small amount of new material in Catching Fire and was otherwise filled with Mockingjay. Because although Catching Fire was a moderately entertaining spectacle, it doesn’t offer enough on its own to be a memorable film.

Note: This is a “Rewind Review” of a film viewed during the blog’s hiatus. The film was watched on September 12, 2014. The review is based on my notes at the time and my thoughts reflecting back on the film without a second viewing.