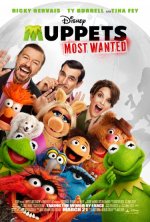 Being “meta” — originally “meta-textual”, openly discussing the medium of a work within the work itself — is in right now. Has been for a few years; it’s an era in which self-awareness, irony, and talking back to the audience are at least as normal as a straightforward sitcom or movie. The Office and Parks and Recreation both relied on a “mockumentary” style, with the premise of their characters being filmed by a documentary crew as they go about their business; this is also the premise that will be used for ABC’s upcoming Muppets TV series.

But the Muppets have always been meta, always self-aware. In The Great Muppet Caper they sang about how they were starring in another movie. Earlier, in The Muppet Movie, they relied on the script to tell them where to go. Before that, The Muppet Show itself was a show… about putting on a show. And even the pre-Muppet Show TV specials leaned heavily on the fourth wall; the Sex and Violence special had Nigel (later relegated to conducting the house band) struggling to keep the show organized just as Kermit later would. The Muppets Valentine Special, the very first non-Sesame Street outing of the Muppets as a group, had a struggling writer character named Wally who types out the scenes just before they happen. Talking about the show — always with a degree of self-deprecation — is an inherent part of a Muppets production.

This can make it a bit difficult to review a Muppet production, because if one has any negative criticisms, there’s a good chance the Muppets themselves have already beaten you to it. I have no doubt that there are caustic critics out there, just looking for the chance to rip into things, who felt that the opening number to Muppets Most Wanted stole their thunder when it openly admitted that sequels are seldom as good as their predecessors. Yet it does beg the question of where the new film does fall in the standings of Muppet films.

It’s not as good as The Muppets, and is below any of the three Henson-era Muppet films. I’d put it above Muppets From Space, but below Treasure Island. It’s good. But it’s not great, and there are a couple reasons for this.

The first is, I have to say, Walter. Walter worked in The Muppets because as an outsider, he could give a fresh but still Muppety perspective on the gang. But one of the issues of that film, as fun as it was, was that it did feel like Walter had a bit more focus than the gang did at times. That is, of course, acknowledged in this film (with Rizzo in particular griping about being pushed out of the spotlight), but sometimes self-deprecation doesn’t turn a flaw funny, it just highlights the flaw. That’s the case here, as Walter is still very much in the forefront. When Constantine, the “world’s most dangerous frog”, swaps places with Kermit, Walter is the only verbally coherent Muppet who suspects something is wrong with their leader. It seems just a little out of place that Fozzie, in particular, doesn’t notice; dense the bear may be, but he’s also Kermit’s closest friend, and it stands out as odd because we can be sure that if Walter weren’t in the film, it would be Fozzie who would figure things out. And Walter simply isn’t as strong or as interesting a character as… well, any of the classic Muppets. His personality is pure vanilla nice guy, with no real quirks to make him stand out, so him having so much of the focus again hurts the film some.

The other major issue with the film is the plot itself. Ricky Gervais, as Constantine’s henchman, wheedles his way into the Muppets’ trust and leads them on a tour of Europe so that Constantine can steal priceless treasures — and eventually have the Muppets take the rap. Before I criticize it too harshly, let me state that it is a fun plot, and Ricky Gervais interacts well with the Muppets, as does Tina Fey as Kermit’s Russian warden. But it has one significant problem, which is that the Muppets have done this already. In Muppets Most Wanted, we have a sophisticated criminal manipulating the Muppets to steal a priceless treasure, with Kermit implicated. And in The Great Muppet Caper, back in 1981, we had a sophisticated criminal manipulating the Muppets to steal a priceless treasure, with Miss Piggy implicated. There are different notes played, but it’s still recognizably the same tune. And speaking of tunes, even the opening number of Muppets Most Wanted, “We’re Doing a Sequel”, is reminiscent in theme to The Great Muppet Caper‘s opening number, “Hey, a Movie!” (And, sadly, is the only really memorable song in the film.) On the heels of a film which was essentially a revisiting of the themes of The Muppet Movie, it really raises concerns about originality on the part of the franchise’s current handlers. How much of this is to be blamed on director James Bobin, I don’t know, but he did co-write the script, so at least part of it’s on him.

Still, while these issues prevent the film from being great, it’s still quite a bit of fun. Gervais and Fey are having fun hamming it up, and Ty Burrell also does reasonably well as Sam the Eagle’s Interpol counterpart. And the Muppets themselves all feel right. The timing is still there, their basic natures are still in place. When they make jokes, the jokes work. And really, that’s the most important thing about a Muppet movie.

Though the next time Disney does a Muppet film, whether it’s with Bobin or not, it had better not be a re-hash of The Muppets Take Manhattan.

4 Responses to Muppets Most Wanted