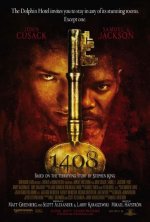 A writer of horror stories writes a horror story about a writer. An obvious idea, perhaps, but just because it’s obvious doesn’t mean it’s a bad idea. Naturally, the horror writer in question is Stephen King; a little less expectedly, the fictional writer is more of a debunker of the supernatural. John Cusack plays a man who visits haunted locations around the country, attempts to experience the alleged paranormal activity, and writes about his experiences. He has become jaded to the whole experience, as he has yet to experience any genuine phenomena in any of the locations, no matter how rich with history, and no matter how much the the proprietors play up the haunted nature of their hotels and rooms.

But with hotel manager Samuel L. Jackson, Cusack finds a curious situation. He’s used to hoteliers who half-heartedly try to convince him to stay away, playing at reverse psychology to sell the haunting. But Jackson genuinely refuses to rent room 1408 to him. It’s only when Cusack’s publishing company threatens a lawsuit that Jackson relents. Of course, that’s when the trouble begins….

The story setup is simple, a classic bit of “careful what you wish for” mixed in with classic haunted house (or in this case, haunted hotel) tropes. This much we’ve seen before, and an audience could easily be as jaded as Cusack’s writer about it. The setup isn’t the selling point. The real questions are two-fold: does the audience sympathize with Cusack, and does room 1408 present something to genuinely thrill the audience?

For the first question, the answer is a fairly easy “yes”. Personality-wise, Cusack isn’t stretching himself here, playing a basic slightly stand-offish but essentially likable everyman. But the story hints and teases at his past, gradually pulling out elements of personal heartache and personal connections that humanize him and make this more than just a story about a man being frightened by a haunted hotel room. By the end of the story, we’re not just hoping the writer lives out the night, we hope he lives better than he has recently.

As to the second… it’s a tougher question. Director Mikael Håfström arranges things skillfully, and all the special effects look great. The timing of things is very well done, and there are some effective jump scares here and there. But the need for horror movies to start things slowly — and I think that’s an important aspect of such stories — has a curious side-effect in this particular case. The problems Cusack’s character faces early on aren’t threatening so much as just plain aggravating. Hints of the supernatural are initially limited to malfunctions in the hotel room… and the timing of them and the sheer perversity of how they break isn’t frightening, it’s funny. It would be very easy to picture the exact sequence from the first — oh, let’s say about 20 minutes — of his hotel stay in a comedy film. It’s more like Vacation than The Shining.

Now, once the more explicitly supernatural events start occurring, this changes. There are some genuinely eerie moments and Håfström and King pull a lot of entries out of the lexicon of fear. We understand why the writer is frightened in these situations. But his steadfast insistence on returning to stoicism, combined with the slapstick-like nature of the first few occurrences, makes it difficult for to share in that fear. I found myself viewing it almost academically, much as Cusack’s character attempts to do.

Nevertheless, the success of a film, even a horror film, isn’t necessarily whether it instills fear. It’s whether it instills interest. And on that note, 1408 is a success. I was always curious as to what was going to happen with the next tick of the clock.