Mysteries must be a difficult genre to write for. Whether it’s in literature, or for television, or movies, the same basic difficulties come into play. If you want to write a genius detective, you must be smart enough to write for a genius. If you want to stump a genius detective, you must perforce be smart enough to stump a genius. At the same time, however, the mystery must eventually be solved. And therein lies the big difficulty. You don’t want the solution to be something that the audience can figure out while the detective is still completely bewildered. But at the same time, if there aren’t enough clues for the audience to pick up on, it can lead to the audience feeling as though the detective only solves it because the writer has given the answer. They become like the SNL Celebrity Jeopardy version of Sean Connery, yelling “You wouldn’t be so smart if you didn’t have those cards to read from!” It’s small wonder that, especially in movies and television, writers often don’t even try. The typical mystery movie is more of an action movie with an unknown element; “solving” the mystery consists of the hero surviving long enough for the villain to reveal themselves.

And yet, there’s something very appealing about a genuine mystery story if done well. In the early 1900s, mystery writers — many of whom discussed storytelling techniques with each other — codified the concept of the “fair play mystery”. The idea is a mystery that plays fair with the audience by being solvable by the audience member — at least if the person is sufficiently alert, intelligent, and knowledgeable. The clues are there to be understood, and in sufficient number that the solution can be found. There is something immensely satisfying about figuring out a mystery mere moments before the Great Detective does. And even when the reader or viewer doesn’t figure things out until the Great Detective gives the summation of events, the fair play mystery still leaves them with the feeling that they haven’t been cheated. This is because a fair play mystery requires that the central mystery must, on some level, actually make sense.

Richard Knox, a mystery writer, developed a set of ten commandments for writing fair play mysteries. Some of these are out of date, or overly specific, or otherwise in need of some adjustment, but they serve as a good starting point for getting the idea across: 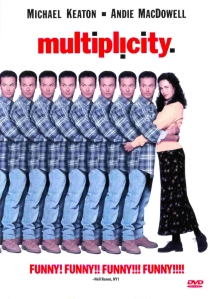 Michael Keaton is banned from participating in mysteries.

Some of these rules I think are absolutely spot-on even today. Others were rules that Knox wrote down specifically to address problems with some detective fiction of the time, and no longer apply. And some I think are more guidelines than actual rules, or are cases where something is just prone to being handled poorly and is not intrinsically bad. For example, I don’t think every detective story needs a “Watson”, nor that the sidekick necessarily has to be inferior to the expected intelligence of the audience. And a few of the rules seem more like specific instances of more general rules.

But the basic concept, that following certain rules will make a mystery “fair” to the audience and allow them the chance, however slim, to solve the mystery, is a sound one. And while it’s certainly possible to have a good story without the mystery being fair — Memento, for example, doesn’t remotely play fair with the audience but is still a great story, and most Sherlock Holmes stories aren’t entirely fair — there are few better ways to make a bad mystery than to have it look like it’s solvable when it really isn’t. So, with that in mind, here’s my take on what it takes to make a fair play mystery.

All facts must be in evidence before the conclusion. Anything that is necessary to solve the mystery must be known to the audience prior to the time at which the solution is announced. This means you can’t have the criminal be some character who only shows up at the last moment, or have the detective withhold some vital clue from the audience, or have some secret passage that shows up unannounced at the end. This doesn’t mean every clue has to be explained before the summation — for example, if you’re relying on the old “bitter almonds” hint for cyanide poisoning (incidentally, please don’t, it’s cliche), it’s sufficient to refer to the smell of bitter almonds without explaining the connection to cyanide. The idea is simply that the audience has to have a chance to figure it out; whether they actually do so is up to them.

No out-of-context entities or clues. If your killer is an alien, you had better be writing an episode of Star Trek (and even then it should be a known alien.) Knox wrote off all supernatural or preternatural forces offhandedly, but with today’s genre-blending fiction that isn’t necessarily a given. But anything that shows up should be appropriate to the genre it takes place in. If you’re not writing science-fiction, you shouldn’t have an alien be the criminal, or have the crime rely on time travel. The murder weapon shouldn’t be a ray-gun if your setting is the old west. If it’s not overtly a fantasy, ghosts should not be providing hints to their own murders.

Any plot elements should be knowable to the audience. Knox refers to unknown poisons and devices that require long scientific explanations. This is similar to the out-of-context issue above, but it’s more a question of what the audience knows than what the characters can know. Essentially, this means that even in a sci-fi mystery, the murder weapon still shouldn’t be a high-tech device that the audience needs an explanation for that hasn’t been given previously. If the audience doesn’t know that transporter devices are a thing in your universe, the conclusion of the mystery is not the time to tell them. Further, it helps to be reasonable — while it may technically be possible for the audience to derive the solution from a clue referring to the half-life of a particular isotope of rutherfordium, it is not appropriate to rely on them doing so, nor to expect them to know that a particular plant only grows on the southern slopes of a Nepalese mountain.

The story must not lie to the audience. This is a big one. The characters can lie — indeed the criminals almost certainly will. But the story itself must be honest. If something is shown, that something must be real. Don’t show a murder victim die without a struggle, and then later reveal that they fought their attacker and got their DNA under their fingernails. The killer can have an alibi for the crime, but if they literally cannot have been there according to what the movie shows, the audience will deservedly feel cheated. The detective not being the killer is a special case of this; there’s an established trust that the character solving the mystery did not perpetrate it themselves. Further, they also shouldn’t be hired by the killer unless the killer has a very good reason for doing so, which must be explained by the end; otherwise you are telling the audience that somebody who should have been trying to cover up the crime was trying to reveal it, for no valid reason. Also, anything presented to the audience as a clue must be a clue or a red herring — and in the case of a red herring, it must be shown to be so before the resolution of the story, via another clue. 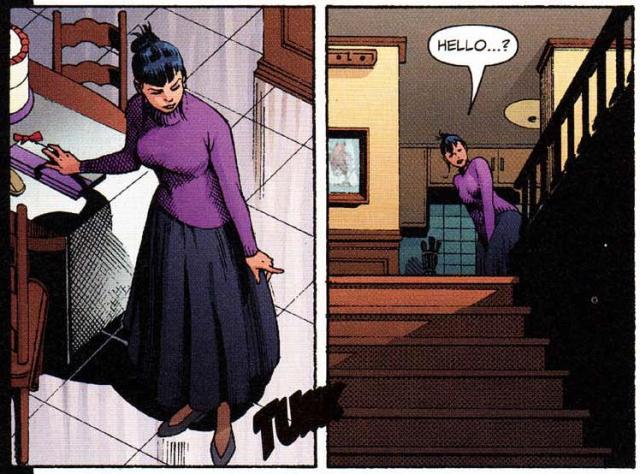 That “TUNK” noise that gets her attention has nothing at all to do with her impending murder, or anything else.

The clues must be correct. This is related to the rule about the story not lying, as well as to the rule about the facts being knowable to the audience. Put simply, if your story relies on certain facts, make sure you have your facts straight. I hate to pick on the late Donald J. Sobol, but he was notoriously bad about this. For example, one of his mysteries had a situation where a man was revealed to have been faking reading the newspaper, because somebody else who was lying down was able to read the headline; had the newspaper been right-side up for the holder, the prone man would have had to read the headline upside-down, which Sobol’s hero stated was impossible. As someone who learned to read upside-down before I even heard of Encyclopedia Brown, I found this answer rather dissatisfying as a kid. Your facts must always be correct in a mystery, whether they’re scientific laws or cultural assumptions. Any error here just renders your solution senseless.

The criminal’s motives must be personal. Knox wrote that “no Chinaman must figure in the story”. Outdated and gauche terminology aside, Knox was trying to oppose racism in storytelling; specifically, the tendency of stories at the time to have a villain who was an evil Chinese man, committing crimes solely for the sake of being evil or some vague attempt at disrupting Western civilization through killing this particular politician. It’s uninteresting because there’s no way for the audience to predict this, and it means the victim doesn’t matter as anything more than just a role they filled. If you’re writing a murder mystery, the killer should never be a simple mugger. It shouldn’t be a racist who only killed the victim because of what color they are. It shouldn’t be a random member of some currently-unpopular ethnicity committing crime just for the evil of it. The murderer must have a motive. Money, vengeance, jealousy… something. But it has to be something that puts the victim specifically at odds with the killer’s personal interests; otherwise, not only is the solution essentially out of the blue, but it also feels unimportant in some way.

Following these rules doesn’t mean that a story will be good, and breaking them doesn’t mean that it will be bad. They just delineate the difference between a fair play mystery and other kinds of stories. Hunts against serial killers who seek out victims based on non-personal criteria can still be fun; but those stories aren’t about solving the mystery so much as they’re about the chase (which is why so many movies of the type can get away with having the killer be known from early on.) And the modern trend for mysteries to be more on the order of action stories with an unknown (and unsolvable) element still provides entertaining stories as often as not. But though the genre of true mysteries is dwindling, there is still value in the genre; it can still be a lot of fun for the audience to try and solve a mystery before the detective does. And it’s only possible for that to pay off well if the mystery plays fair with the audience. These guidelines are what I think mysteries need to do in order to give the audience that chance at figuring things out… and thus a chance for the mystery to provide that thrill for the audience when they do.

Fan of movies and other media
View all posts by Morgan R. Lewis →
This entry was posted in Ramblings and Musings and tagged entertainment, mysteries, Ronald Knox. Bookmark the permalink.

2 Responses to The Fair Play Mystery