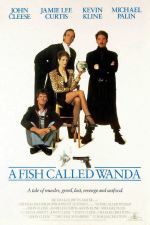 Heist movies can go down a few different paths. They can focus on the heist, or they can focus on the aftermath. Sometimes the latter is more fun, as with the 1988 film A Fish Called Wanda. The film was written by John Cleese and Charles Crichton, stars the former, and was directed by the latter. Also along for the ride are Cleese’s fellow Python alum Michael Palin, and Jamie Lee Curtis and Kevin Kline.

Oh, and Tom Georgeson. It’s a funny thing that he doesn’t get poster billing, since his character gets the whole thing rolling, but that’s the thing about movies about heist aftermaths. Sometimes the aftermath involves the ringleader being out of focus, whether it be due to mishap, arrest, or an inconvenient double-cross.

Turns out criminals aren’t a trustworthy lot. Who knew?

Tom Georgeson, playing George Thomason (really), is the ringleader of a gang of thieves orchestrating the robbery of a diamond collection. It goes off without a hitch, until — unknown to him — his lover Wanda (Curtis) calls the police to turn him in. She goes with her lover and fellow crew member Otto (Kline) to go and retrieve the diamonds from where they’re stashed, only to find that George hadn’t trusted them fully and stashed them someplace else. Wanda and Otto have to maintain their brother-sister masquerade in front of the more trusted Ken (Palin), while trying to glean clues on the location of the diamonds from George. This involves Wanda seducing George’s lawyer Archie, played by John Cleese (Curtis’s character really gets around in this film).

The comedy in the film comes primarily from watching these disparate personalities play off of each other. Otto is a boorish neanderthal who thinks he’s highly educated due to reading (and misunderstanding) books on philosophy. He’s wildly jealous of Wanda, but has to maintain an act of being otherwise due to their posing as siblings. He harasses the stuttering Ken with machismo one minute, and then harasses him sexually the next to throw him off balance and off the track. Ken is a meek and mild animal lover, which makes it all the funnier when George asks him to kill the prosecution’s key witness, a nearsighted old lady with a pack of Yorkshire Terriers. We all know how the attempts are going to turn out, but this doesn’t stop them from being darkly comic. 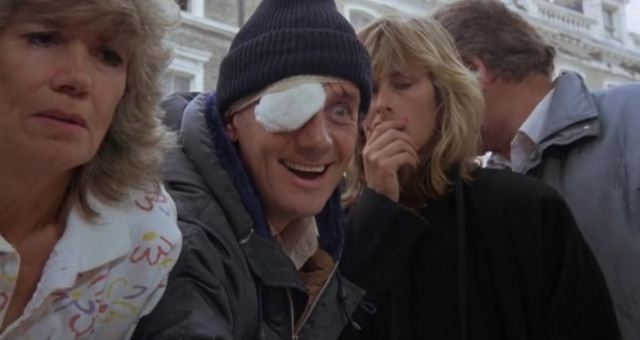 Just be inconspicuous about it.

And then of course, there’s Archie and Wanda. Wanda is a forward American woman, willing to seduce and double cross anybody to get ahead, whose sole emotional weakness appears to be an excessive fondness for foreign languages. Archie is a stuffy uptight British barrister who is initially terrified of their affair, but starts to find it liberating as he’s tired of having to act “correct” all the time.

The film is hilarious from beginning to end, with lots of laugh out loud moments. What makes it work is that each of the four primary actors are allowed to play to different strengths. Palin gets a lot of physical humor, while Kline chews the scenery as the bombastic and psychopathic Otto. Cleese delivers a lot of dry British deadpan humor, while Curtis fires off one sharp-tongued line after another. The four lead characters are all very different from each other, and each is funny in a different way, yet the combination of the four carries the film. It’s been a long time since I’ve laughed so hard, so frequently during a movie.

10 Responses to A Fish Called Wanda