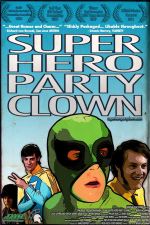 It can sometimes be fun to check out a film that you know to be obscure. When Super Hero Party Clown showed up on Hulu’s new films page several months back, I added it to my queue noting that it sounded reasonably interesting. I also noted that it was virtually unwatched on IMDb (as of this writing it has a whopping 20 votes on it, counting my own), and was not yet on Letterboxd at all. Produced in the late 2000s, it made a few appearances at film festivals and was eventually released direct to video in 2012, when it apparently flew under virtually everybody’s radar.

Being a freshman effort for writer-director Jeremy M. Inman and an independent film to boot, it’s perhaps unsurprising that more people haven’t heard of it. And it’s not a film that is going to appeal to everybody. But it has a certain charm to it that warrants some attention from at least a certain segment of the population, specifically comic book fans who have the ability to poke some fun at themselves.

Or at least at fellow comic fans in cheap costumes.

The film is centered around high school student Eugene Stimpson (Randy J. Blair), who has a part-time job dressing up as a superhero for children’s birthday parties. He has long held a torch for his childhood friend Emily (Shelby Barnes), but lacks the nerve to approach her, to the point where even at a party for her little brother, he is afraid to reveal his identity to her despite her obvious interest. Matters become more complicated for Eugene when his rival for Emily’s affections (Adam Sessa) decides that, if Emily appreciates the costumed entertainer at her brother’s party, the best plan of action is to join the party company himself as another superhero.

The love-triangle aspect of the romantic comedy isn’t anything particularly novel as far as young romances go, but it does have a bit of a twist by using the secret identity trope that is normally reserved for actual superhero movies. Even so, the bulk of the romantic tension, as well as the bulk of the comedy, comes from Eugene’s awkwardness and shyness. While it provides some laughs, they aren’t especially strong ones due to how common “awkward nerd” is as comedic trope. It also makes Eugene a bit difficult to like, as most viewers will be joining his co-worker friend Garth (Zach Sutherland) in saying that Eugene should just man up and approach Emily openly.

When a professional clown thinks you’re being too nerdy, it’s time to step back and reevaluate.

What redeems the film is an honest affection for its subject matter. The superhero that Eugene plays, and which is idolized by Emily’s younger brother, is Arachnid-Man, an obvious parody of Marvel’s Spider-Man. The film even opens with a spoof of Marvel’s film openings, with a series of Arachnid-Man panels shuffling into a “Spectacle” logo, and there’s a Stan Lee analogue played by Burr Nissen who gives Eugene some helpful advice at a critical juncture. The look of Arachnid-Man is essentially a neon green and black version of Spider-Man’s costume, though the “Silver Age Arachnid-Man” costume Eugene wears for most of the film resembles the DC Comics character Blue Beetle too closely to be an accident.

Reference Spider-Man and you might just be a parodist. Reference the Blue Beetle and I know you’re a fan.

This affection for the superhero genre adds something to the narrative arc which might otherwise have been lost. The fact that Eugene genuinely loves and believes in his job gives him a sincerity and some likeable qualities before he stops being such a putz about his emotions, a vital trait to prevent the audience from rejecting him. It also allows the plot to follow, in some respects, the conventions of the superhero genre. We see Eugene start out as an established “hero”, face challenges, lose his faith and eventually regain it, all in parallels to how a comic book story might handle it, yet in the context of a romantic comedy. While Eugene’s awkwardness might cause some of the humor of the situation, the film never feels like it’s making fun of him for his fandom; rather, it’s his fandom that eventually helps him to get his head on straight.

Being an independent film, the actors are all unknowns, but this shouldn’t be taken as any slight on them. While the best is probably Cynthia Adams as Eugene’s beleaguered boss, all of the actors turn in capable performances. There may not be any moments where an actor bowls the audience over with their acting, but neither are there any moments where they seem stilted, unnatural, or otherwise out of character. As awkward as Eugene gets, it always feels like this is genuinely behavior that Eugene would be engaged in. When the audience groans at his latest bit of idiocy, the groan is “No, don’t do that”, and not “No, nobody would do that.” The writing may lay it on a bit thick in that respect, but the acting prevents it from seeming too far-fetched, so that even when the audience is reacting negatively to the characters’ actions, they are at least buying into them.

Super Hero Party Clown isn’t going to surprise most viewers as they watch it. The plot is reasonably easy to predict, and even the character traits can be determined within seconds (e.g., when Todd joins the party company as another superhero, the audience will already know just how familiar with the character he really is.) And it’s not going to generate any big laughs. But it has a certain charm to it regardless; its sincerity in portraying Eugene’s personal issues as analogous to the hero’s path manages to elevate the romantic comedy to a level where it is entertaining and just a little bit different.